*takes a sip of coffee on this brisk 38 degree morning. Yesterday's highs got into the 50's and today will be about that as well. Another sip to keep warm and realizing that the season is changing fast is needed*
It's game day Sunday for the Giants. This used to be a time of excitement for me but as this season has progressed the Giants have looked worse by the week and today face the LA Rams who have played well thus far. If the Giants can keep it within 10 points I would call that a win especially after losing last week by 20 to a practice squad 49er team.

Enough with the sadness, we get enough of that this year already, I am just glad I actually get to watch football. 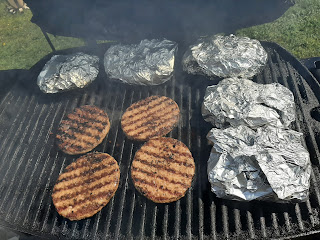 Yesterday marked my year end BBQ where I use the grill for the last time before the weather gets any colder. It will be put away today for next year as it would be hard to grill on my deck full of snow.

With it being game day, I thought it would be fun to show off my break of 2020 Donruss football.
My father was able to grab two hangers for me and two for himself before it sold out. My first blaster, which I opened was embarrassingly bad so I won't show that. However, the one I gave my wife to open was pretty solid so we will do that one. Not that I mind showing off bad breaks, but I think today I want to focus on the positive.
*takes a sip, begins to rip* 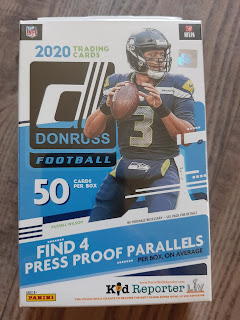 Every Hanger Box of 2020 Donruss football comes with 50 cards. Each box also promises 4 Press Proof parallels and shots at autographs and relics.
The Donruss base card design has kinda stayed par for Donruss for some time now. Nothing new about it. 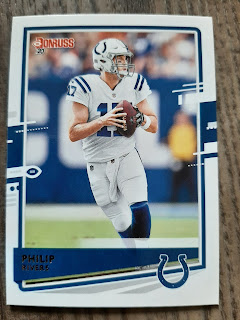 Other than players in new places. It is weird seeing Rivers in a Colts uni. 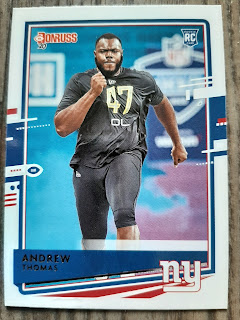 The base set has 350 cards with 50 rookie base and 50 Rated Rookies as well. I didn't find any Rated Rookies in my pack and the best rookie I found was the Giants first round pick offensive lineman.

Up next we find the 4 promised Press Proof parallels which are red. 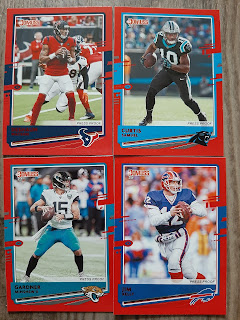 Can't complain about any of these guys with Watson and Kelly leading the way.
Other parallels include, Aqueous Test, Season Stat Line /500, and Jersey Number /99
Press Proof Parallels Of Red, Silver /100, Silver Die-Cut /75, Gold /50, Gold Die-Cut /25, Black /10, and Black Die-Cut 1/1.
*takes a sip*
For me though, it's not about the base or the parallels or even the hits, I come to Donruss for the inserts/nostalgia and their shiny appeal. 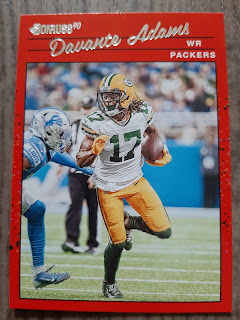 Nostalgia Factor kicks it off here with the Donruss 90 design. I think this would have made a better base card design. Panini should had chosen a different Donruss design from the 90's to use for their base designs instead of using them for inserts.
40 cards with this design is what you would be chasing. I won't be as they left off the Giants from the checklist for it. How could you not at least make a Saquon one?! 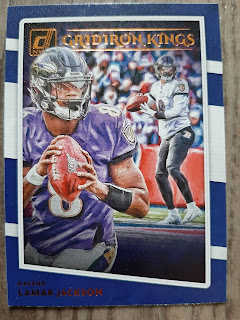 Gridiron Kings with one of the NFL's best young players. There are 15 of these to collect. 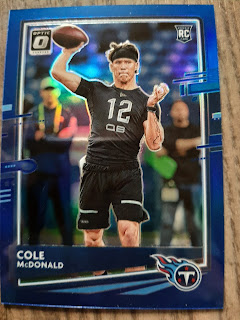 I found it interesting that Panini added a Optic preview set to this. It feels un-needed but I always do enjoy a chromed card find. This one is a blue /99 parallel. Not the greatest player to pull but hey, it's still a rookie QB. Other parallels of these to find are Holo, Pink, Red & Green, Red #/99, Gold #/10.
There are 100 of these to chase with Rated Rookies and rookies included.
How can you have Donruss without Elite Series? YOU CAN'T!! There are 60 of them to collect split by rookies and veterans. 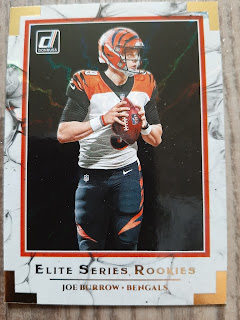 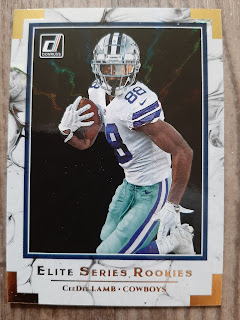 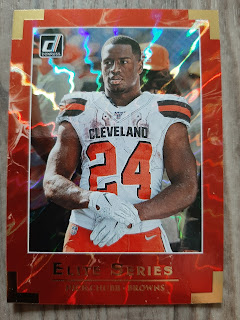 Not that Nick Chubb is that shabby either. 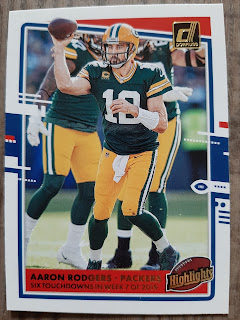 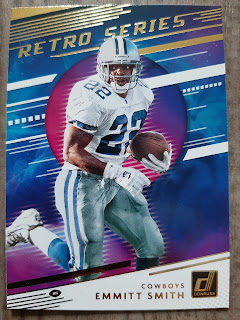 17 cards in the Retro Series to collect. This has a 90s appeal. 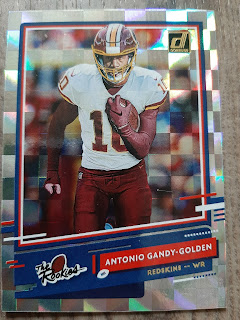 42 of The Rookies to Chase 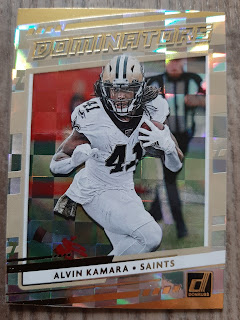 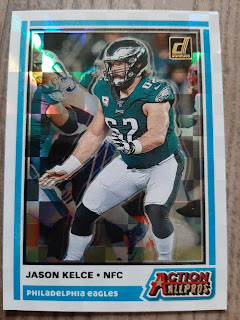 And to finish my break off, what appears to be a 80s looking insert ends it with Action All Pros. There are 18 cards to collect.
*takes a sip before closing up this post. Honestly, that's a lie. I just finished up this cup and am brewing a second one. I have to use the Keurig today because this guy forgot again to grab a can of coffee from the grocery store the other day thinking that he already had one at home. You should never ever do that*
Donruss once again was an entertaining break. It gave me all the feels with the nostalgia and the shiny goodness. I do wished I could have pulled some better rookies-at least I got that Burrow insert-or some more PC cards, but I will take what I get and can always search for the other stuff another time. It's all apart of the hobby fun.
Posted by Matt at 8:30 AM