*sits down with a new mug in hand, fresh pot of coffee and some pumpkins spice creamer to top it off. It's going to be a good day*

There are not many surprises in life, at least good ones, so soaking in the ones that come are fun. Some examples of fun surprises in life include, getting engaged, having a baby (especially if you don't find out what you are having ahead of time),birthday parties, those onion rings in your french fries from Burger King and the unexpected announcement you are getting a mail day.

That surprise recently hit me via Twitter from @SpartyHawkCache. He took note one day of a #CardsOverCoffee Tweet I had with a mug of fresh hot joe in it and said you need an upgraded mug. 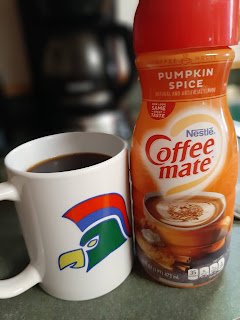 So he sent me one of his mugs with his logo on it. I gotta admit I got a little giddy over my first hobby mug. I look forward to using this many times and think it would be fun if others had mugs as well especially bloggers. I could have a late night cup with a Night Owl mug or sitting in my card area with stacks everywhere sipping on a Too Many Verlanders mug or drinking an afternoon cup in October from a pink Collectin' Cutch mug. Hint, Hint to all of the bloggers out there reading this.

*takes a sip, begins to continue on*

I thought the mug alone was amazing, then he mentioned a second envelope would be coming and did a few days later. I had no idea what was within which made for one of those positive surprises I talked about above. 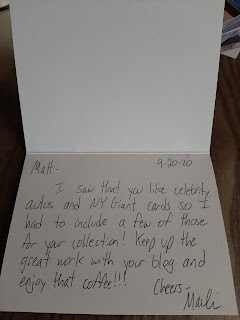 Inside of the bubbler was this hand written note. Every note ever sent to me I have kept and hope to put in a scrapbook some day.
The note informed me that some NY Giants are inside along with a few celebrity autos. I think he nailed this extra mail day. I also liked the kind words about the blog. This blog may not have the reach quite yet, but hopefully it will get there as many enjoy what I am doing here.
Behind the note was the card  portion of the mail day, 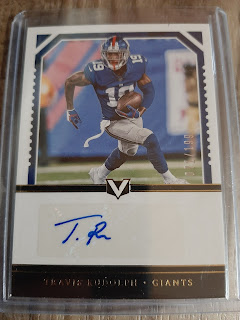 We start out with a Travis Rudolph autograph. I really wished he could have had more chances with the Giants as he blew up the preseason in 2017 but failed to make the roster completely and only had limited opportunities both with the Giants and Dolphins. He had 8 catches for 101 yards in his NFL Career and currently plays for Winnipeg Blue Bombers of the Canadian League. I wish him all of the best! 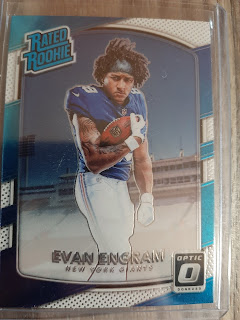 A few things about Evan Engram. One, he can't stay healthy. Two, he shows flashes of a Hall Of Fame Tight End but then doesn't and can't seem to live up to his potential and three, Coach McAdoo wanted the Giants to move up that year and draft some guy named Patrick Mahomes but instead the Giants sat back and went with Engram. This must be why I am a Mahomes fan and want to see Engram live up to those standards. 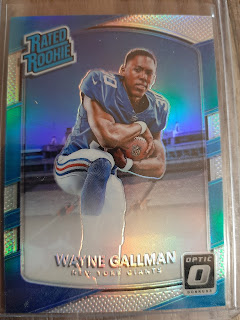 If this doesn't tell you much about the Giants as of recent, nothing will. They drafted Wayne Gallman in 2017 who showed he could possibly carry the load at running back in 2018 and then went and spent the second pick of the draft on Saquon Barkley. Nothing against Saquon and I was rooting that pick on, but looking back on it and the Giants passing on guys like Josh Allen, it stings now. Especially with Jones struggles and Saquon's injuries the last two seasons.
*takes a sip, takes a deep breath knowing how the Giants could have had Patrick Mahomes, takes another sip, takes another breath, sip, breath, continues on*
I gotta admit, I was chuckling to myself some when I got to the celebrity autos. 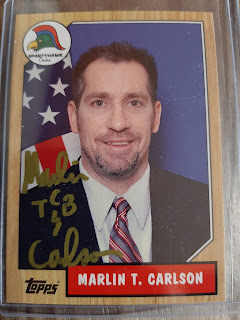 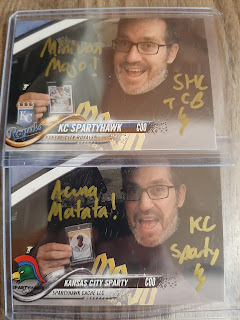 I love good humor but, he is a hobby celebrity so it is a win. I plan to keep those in my scrapbook with a few other hobby autographs I have. 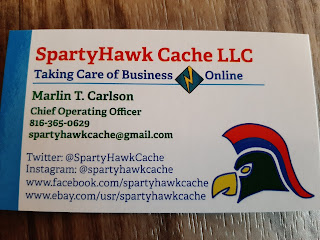 Thanks for the mail day Marlin! Solid one all around and I appreciate your kindness.

*takes a sip with a smile, then decides not to end the post quite yet*

I know how much you guys enjoyed my last round of foliage pictures, so thought I would show some more on a short trip around town my wife and I took. We did this adventure before the heavy rains came because we knew that would be the end of the beautiful colored trees and honestly, it was. 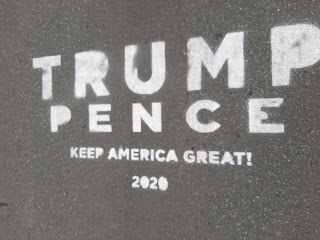 The trip started out with finding this surprise painted on the road. I thought it was funny and posted it on Facebook and a day later..... 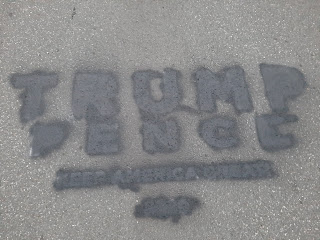 This was how it looked. Someone tried their best to blend it back in to the road. It actually stands out more now. Gotta love politics.

Now onto rest of the trip before I cause a political stir. 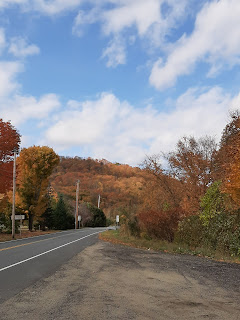 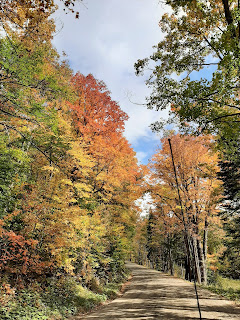 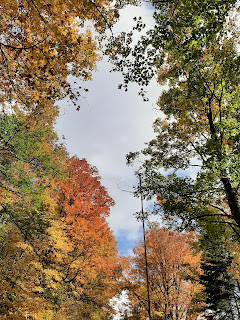 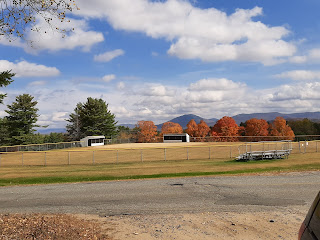 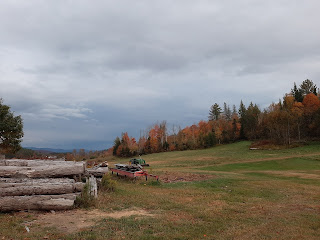 This was only some of the 30 or so pictures I took overall. I figured I didn't want to bore you guys too much with them, so a few pictures would do for this post.
The foliage has now passed and we are sitting in that weird spot where the trees look brown, leaves are on the ground everywhere and the wet smell of fall is here. At least there isn't any of that white stuff on the ground yet as I am not ready. But, we all know how 2020 has gone so it wouldn't surprise me one bit to see it early this year.
That's one of those surprises you don't want.
Posted by Matt at 11:00 AM