*pours a fresh hot cup and sits down to type* 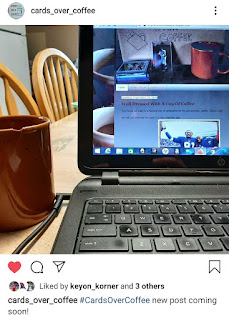 It's been well over a month since I last made an entry on here. Don't worry though, I haven't missed out on coffee that long.
I did miss out on something though, my laptop computer.
It was a cold, clear morning when I was about to sit down and make an entry on here. I went to hit the power button on my laptop and it wouldn't turn on. So I thought it must have a dead battery so I plugged it in. Noticeably-immediately, the charge light did not appear. That's when I knew there was bad news to be had. My computer had kicked the bucket....assumingly.
My next step was to text a family friend who was a computer guru and I told him of my issue. He was pretty sure it was the charger jack which was a pain to repair and could be very costly. Probably more than buying a new laptop if you had to hire a repairman. Luckily for me though, I dropped it off to him to take a peek at since he can take computers apart and put them together as a hobby of his.
That was however over three weeks ago.
I knew it would be awhile before he could possibly tackle the issue, he works full time and owns multiple apartment buildings he need to tend to, and that it may not be fixable even when he does take a look at it.
In the meantime, all I had was my wife's computer she used during nursing school and a chromebook that has been kicking around for years.
*takes a sip, a chug, another sip, and chugged the first cup. Remembering back to using those wasn't an easy memory*
The Chromebook for some reason or another wouldn't connect to the internet in my house. It kept popping up the message that I was out of range though sitting in my living room right below where the dish comes in at. It didn't matter how many times I restarted it the same message popped up. The thing with Chromebooks are they are useless without internet connection.
Then there was my wife's nursing school computer that was used and abused from her years of schooling. It was like handing an elderly person with a cane and one eye a note and having them walk a mile to deliver it to a friend just to get one page to open. On top of that, when I went to upload my photos to the already pain-in-the-rear new blogger it turned everything sideways which was torture as I had to hand crop and turn every one of them. Posts that would take fifteen minutes stretched out to two hours....each.
*takes a sip of new cup of coffee, thinks about breakfast while doing so*
I was stuck. It wasn't as easy as just buying a new computer and calling it a day. First off, new computers were expensive and secondly, I am old school. It took me until after late 2010's before I started using a non flip phone if that tells you anything about me. 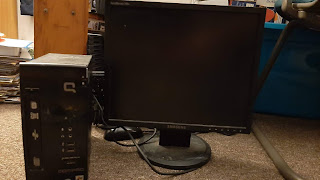 Then there was the thought of firing up ole reliable Mr. Desky. I used this desktop computer from the time my wife and I met until way after she had bought me that laptop that died just now. This desktop was used in the beginning of my hobby social media experience and blogging. I refused to give it up despite having a brand new laptop sitting right next to it, but overtime I decided it was easier to carry a laptop everywhere then having to be stuck at the one desk.
I will be honest though, I still held onto this desktop just in case and stored it downstairs.
As I said on here already, I am old school. I don't replace old things with new things that easily. Tear in my pants, that's fine it's not that bad and they are still wearable. Hole in the heel of my sock, turn it around and still use it. Shoe bottom falling off, nothing a little duct tape can't fix. Hole in the armpit of my winter coat, that's fine it will help keep the pits dry. It's all good.
Then there is also the case of "they sure don't make things like they used to" and I have proof of that. My wife and I had a washer and dryer we used for 10 years when we first got together. Since then in the last five years especially, we have replaced the washer and dryer two to three times each. EACH. Which by the way, don't buy Samsung washer and dryers and this wasn't needed to be sponsored to be said.
So I always say "why replace something that isn't broken?" and that was how I felt about the desktop computer when my wife bought the laptop for me with good intentions. It just took me a few years to use it and when I finally got used to it, touchscreen and all, I really enjoyed using it.
But, here I am at the crossroads again. Do I really want to try and learn a new computer? Do I go back to ole reliable? Sit around and hope my old one gets fixed (in this case duct tape can't help it)?
That's when two days ago my answer came in the mail.
*finally decided on breakfast, 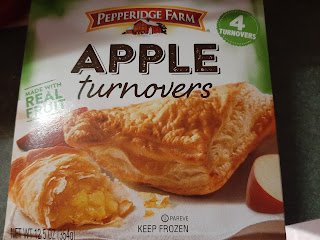 these delicious Apple Turnovers should hit the spot. I just hate waiting for them but at least I have some more of this post to go, and edit, and the oven is preheated*
In the mail was a good sized box which had my wife's name on it and as I always do, I give her the packages and try not to ask any questions. That's how you keep a happy marriage. I returned back to cooking/preparing supper up until she called me into the other room again. This time she wanted to show me what was in the package and what was in there was exciting for sure. She had bought me a new computer for Christmas from Black Friday ad!
I think she could see my frustrations with using the two we had and she knows how passionate I am about blogging and collecting so it was the perfect gift. She also realized she couldn't wait to give it to me as she got it purposely for me to use now.
Getting a new computer was great news at this point despite knowing finding cards under the tree now was unlikely this year. That's okay though, I got a computer I can use to talk about cards and it was simple and nice at the same time. Not a lot of hoops and yo-yos to learn. 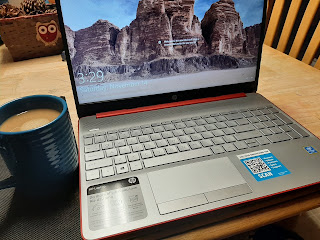 Yesterday I teased a picture of it on Twitter stating that #CardsOverCoffee has returned and since you are reading this, it has!
*takes another sip of coffee*
I must apologize there were no cards in this post, I just thought an explanation of where I have been since my last post on here was a good idea. We can now head back into card discussions again and hopefully have more new posts soon. 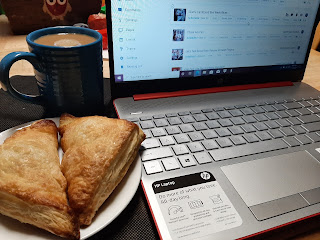 In the meantime, I am going to enjoy my breakfast, check out more of this computer and get ready for my day.
*takes another sip* 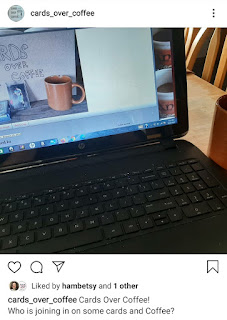 I can't though end this post without showing off another Instagram photo I took of my former laptop. It will be missed with all of the memories I have with it and on it. If it can't be fixed, I must take the hard drive out as there are tons of family photos and other documents I need off from it. Which will require my computer friend guru's help as I only know how to use a computer for typing.
Now it's time to make new memories with Big Red, my name for this laptop. With a keyboard in front of me and coffee by my side who knows what or how far I can go again.
*takes a bite of apple turnover, sip of coffee and completes the first post/memory using the new laptop. New memory made*
Posted by Matt at 12:00 PM