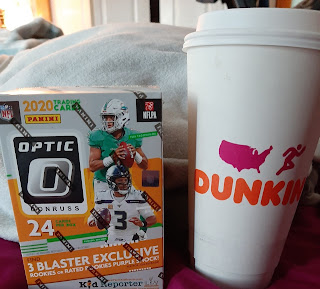 *stops by Dunkin' on the way back from an appointment. Takes a sip of sweet mocha goodness. Oh, and I may have found that blaster in the picture to but you will have to continue to read the rest of this to find out. Takes another sip, begins to tell his tale*
Last week, my wife and I had to take a two-hour trip so she could see a specialist on her Thyroid problem. Originally, I was supposed to see a liver specialist at the same hospital/time for my non alcoholic fatty liver, but my appointment got rescheduled to an online one this week. I despise online appointments. Especially since I have never met this doctor before and I prefer in-person meetings to begin with.
Enough with that as I could rant about that for hours.
So with Covid, I wasn't allowed into her appointment and instead sat in the car over an hour in a parking garage listening to static on the radio and no internet reception. I felt like I was back in the 90's except I wasn't outside with my friends playing baseball....or at the very least had my writing notebook for a story.
It was boring, but the good news was at least my wife had good news. She will have to go back in six more months, but for now, all is good.
*takes a sip, mocha goodness continues to make my tongue dance*
Now you're probably wondering where the blaster box came into play.
On our way back, there were many options for shopping and eating establishments since we weren't close to home where there is nothing. But, with so much road construction, which you don't see often in the winter, we decided just to head back to one of the local three Walmarts that are all equally an hour from my house or in this case half way home.
The last thing I expected was to find cards since I have been told this was the Walmart where the vendor is literally stalked by the vultures. So I was basically going in to see if I could find some Sour Gummy Worms. Love those things.
My wife had to use ladies room and told me to check out the card section since it was across from it. As we approached both areas, I could spy something from the distance. Something magical. Something... 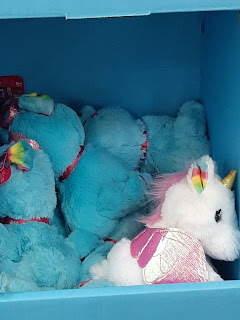 Like this white unicorn.
It stood out to me among a bunch of empty display boxes.
A BOX OF 2020 OPTIC FOOTBALL.
Just like that unicorn, boxes/packs of that stuff is impossible to ever find like Prizm. It's a four leaf clover basically.
I ran over to the shelf like it was the last Turbo Man almost shoving my wife to the ground and spun around, like Barry Sanders, an older woman who was using the self checkout in that section. I had it. It was in my hands.  I held the box up like Simba in the Lion King and proceeded to my cart like a champion. I bet Eye Of The Tiger was playing as well.
Now to protect my findings from everyone else until I exited the building.
I never once left my cart unattended, I made sure to bury it underneath all of the other items in the cart and did self checkout to make sure it got into the bag. Pretty sad I had to take all of these precautions, but the hobby is what it is now. 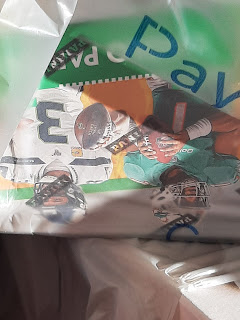 I knew I wasn't completely out of the woods until I put the bags into the trunk with the box. Phew.
*takes another sip, proceeded by another*
With the box in hand, there is only one thing left to do and don't you dare say flip it. Nope, that's not for me. It's time to rip it!
*takes a sip, begins to rip* 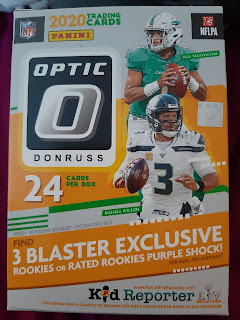 Every blaster box of 2020 Optic football comes with 24 cards. Which is 6 packs of 4 cards each. There is also one 3 card Blaster Exclusive Purple Shock rookies or Rated Rookies pack as well. The box doesn't list it from what I see but apparently there is also one relic card per box and 6 total rookies/Rated Rookies. Blasters sell for $20 but on eBay go for $100. 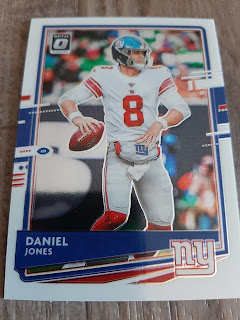 There are 200 cards in the base set to collect and the design is a chromed-up Donruss. I found this Daniel Jones and was pleased.
My other base, 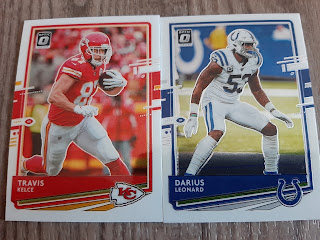 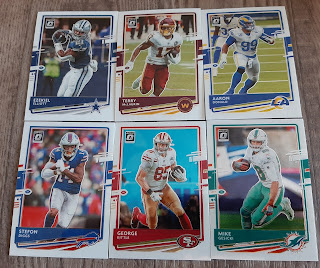 Some stars in there.
Up next, the rookies. I didn't expect as many as I landed but I was pleased. 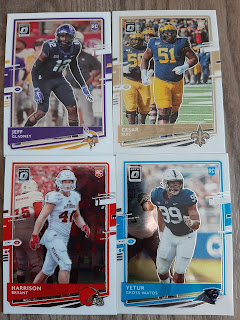 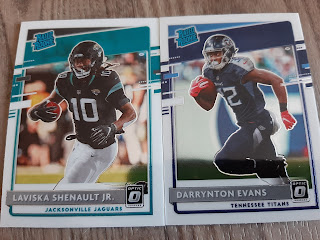 My two Rated rookies. Shenault had a decent season with the Jags despite all of their QB issues and Evans I seem to keep finding when I am able to open 2020 products.
Now onto the parallels. There are tons of parallels as you would expect to find but the most sought after ones are the holo silvers like Prizm.
Here is an overall look at the parallels,
PARALLEL CARDS: Holo, Red Stars, White Sparkle, Aqua /299, Orange /199, Wave /199, Blue /179, Silver Circles /125, Red /99, Orange Scope /79, Pink Velocity /79, Purple /50, Lime Green /35, Black Pandora /25, Purple Stars /25, Gold /10, Green /5, Black 1/1, and Gold Vinyl 1/1.
PREMIUM SET PARALLELS: Wave /199 and Black 1/1.
ROOKIE/RATED ROOKIE ONLY PARALLELS: Bronze, Blue Hyper, Blue Scope, Green Velocity, Orange Scope, Pink, Purple Shock, Red Hyper, Red Mojo, Teal Velocity 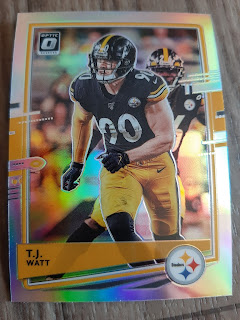 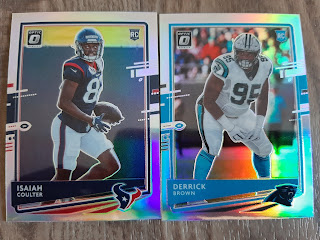 Bleh. Non QB/RB/WR silvers are pretty much bleh unless they are from the Giants of course. 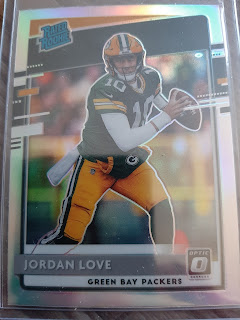 Then a big whopper!!! BOOOOOM! Jordan Love Rated Rookie holo silver. Pretty big card and it actually came out of my first pack! This is my third huge Love hit. I sure hope he turns into the next Mahomes.
Now onto the Purple Shock parallels. 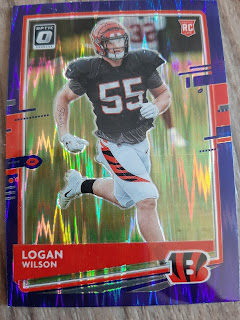 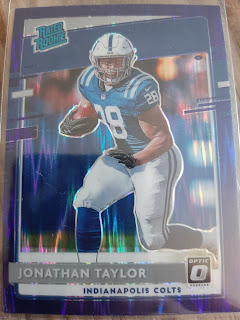 Jonathan Taylor..not too shabby at all. 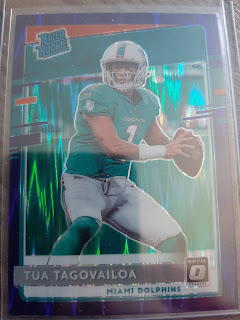 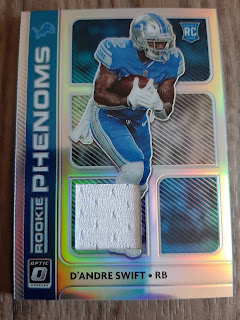 And somewhere in the pack ripping I pulled this relic. Didn't really catch my eye like my two really good hits. In a product like this it's more about the rookie parallels then the actual hits.
That was quite an impressive rip. By far the best box, including hobby, I have opened in a year.
*takes the final sip before finishing up today's post*
That was a pretty good day overall. My wife's good news, finding the box, enjoying that coffee. Couldn't have asked for a better day.
Now I just need to get done with my appointment this week and hope for the same kind of good news. I also need to find the main card in Optic football I need, the Rodney Hampton autograph. I know that's not a flipper kind of chase, but it's my kind of chase.
*goes to look to make a cup of coffee now that the Dunkin' is gone, coffee card blogger out*
Posted by Matt at 10:00 AM