*realizes forgot to take a picture of today's coffee mug to do cheers with his readers. Will make sure to do that next time. In the meantime, the coffee is hot and I hope yours is as well. Let's do another new post on Cards Over Coffee*
Today's coffee guest was the voice of my childhood. No, it wasn't just his voice acting skills as Shaggy on Scooby Doo, but his voice came across my radio station every Sunday at 9 am.
Casey hosted his weekly music countdown shows Casey's Top 40 then Casey's Hot 20 and our local radio station streamed, not sure if that's the correct wording, it here. I always looked forward to it knowing some of the specific songs he would be playing since a lot of the top songs played on a weekly basis. However, if they were played often, he would sometimes not play those songs and skip to the next. That would get frustrating.
One of the most played songs I remember is One Week by Barenaked Ladies. I remember sitting in my parent's car and if I knew the song was coming up on the countdown, I would let whatever parent I was riding with go into the store while I sat in the car and jammed.
*taking a sip of coffee and singing in my head, It's Been One Week Since You Looked At Me,Cocked Your Head To One Side And Said I'm Angry. Five days since I.....great tune. Of course when the song gets really upbeat and fast I sound like I am choking on my coffee trying to get those lyrics out. I hope you can picture that imagery. Now onto the rest of this post*
Along with the Ted Danson autograph I just posted about a week ago, I was able to add a Kasem autograph signed photo as well in my trade with Dions Autograph Collection. Another great piece for my childhood collection. 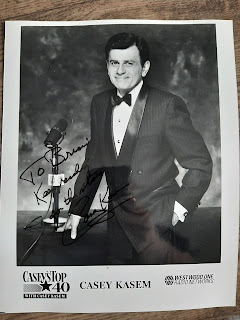 The photo has an inscription, I assume to the friend that Dion had acquired the autographs from. 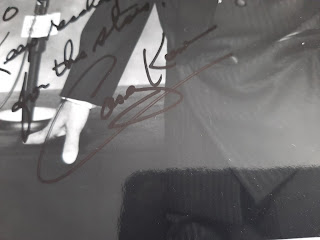 A closer look at the signature.
Casey Kasem sadly passed in 2014 after dealing with Lewy Body Dementia for over a year and spent over 40 years of his life in television and radio.
*takes another sip before finishing up the post*
A big thanks goes out to Dion for the trade and for adding another piece to my childhood collection.
After our local radio station quit playing Kasem's countdown and switched to Rick Dees and the Weekly Top 40, I didn't quite listen to it as much. There was just something soothing about Kasem's voice that I enjoyed. Not that I had anything against Rick Dees or his countdown.
I think it was simply the fact that Kasem was the voice of my childhood.
*another sip, a tip of my mug to you and coffee card blogger out*
Posted by Matt at 8:00 AM