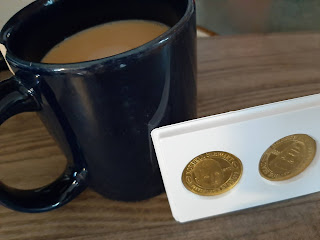 *watching the snow fall...AGAIN...and I picture myself drinking coffee somewhere warm...and then I come back down to earth and at least my coffee is warm. I could use a distraction so guess it's time for some Coins...I mean Cards Over Coffee*
Every year, Shane from Cheap Wax Wednesday fame and myself pull off a fall trade that usually includes some...well..cheap wax.
This past fall we pulled off another one of those massive trades and I have been sitting on some boxes to post about.
First up, a box of 1996 Pinnacle Mint football.
I have already busted a box of this a couple years ago and had so much fun that I wanted to do it again. It's a product that brings two hobbies into one and brings me a lot of nostalgic memories back when I opened some packs at 13 years old.
So now we know what must happen..
*takes a sip, begins to rip* 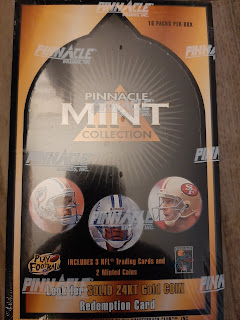 Each box of 1996 Pinnacle Mint football comes with 16 packs. Each pack comes with three cards, two cards with a die cut hole in the middle, one base and two coins in a plastic holder. Box price, I have no idea now. But, with today's hobby, it's gone crazy I am sure. 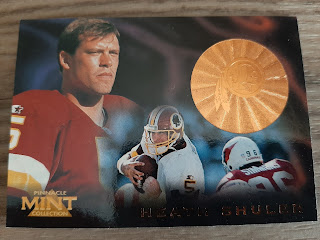 There are 30 base Bronze cards to collect. Sadly only one NY Giant but the rest of the set is mainly the stars of the 90's. The one Giant isn't even Rodney Hampton, it's Dave "I throw tons of interceptions" Brown. 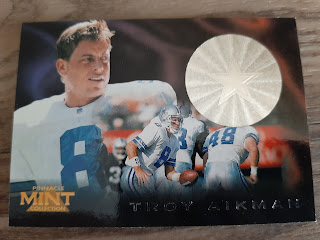 There are also 30 Silver parallels as well that fall 1:20 packs.
You can also find Gold parallels as well.
I need to gather the die cuts and base to see how far I am on those sets and make a list of needs if so. I don't think at this time I will bother chasing the parallel sets with only a few in-hand.
*takes another sip, then another. The snow continues to fall heavily with an expected amount of 1-3 inches today. Another sip is due and more cups to come after this one is finished* 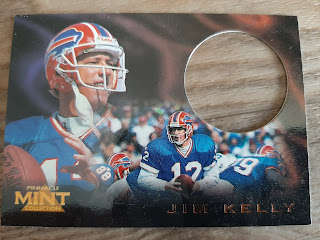 Also in this product are the die cut cards. These die cut cards are meant to be used for the coins to be inserted into.
*onto cup number two, now to check out the coins*

The coins come together as a two pack in every pack of 1996 Pinnacle Mint. Most of the time will be the brass coins which is the basic ones to find.
The coins feature a picture of a players face on one side and the Pinnacle Mint words on the other. I got a little lazy here and just posted all of my coins in one picture with just the faces. I pulled all of the good ones. I need to see if I finally have this set together. 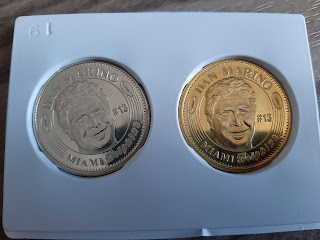 I also found this Nickle parallel coin of Dan Marino that falls 1:20 packs. Next to it is the base brass so you can see the comparison.
And that does it for the break.
Once again that was a lot of fun. Brought me back to when I was 13 years old and found packs of these in a local craft store that had a solid display of cards. My father and I would volunteer to take my grandmother to the craft store so she could grab yarn and just so we had an excuse for my mother on why we went there. As I have said before, my mother was never and still is not a fan of the hobby. Of course she also didn't know of the packs we would hide in our coat pockets back then either. If she did, we would have become a missing persons case.
This is just Box one of four I have to post. So more to come and more coffee to come as well.
*snow finally slowing down for now, some peaks of sun, not sure how long that will last but I plan to take full advantage of it by signing off from here. Coffee blogger out*
Posted by Matt at 11:30 AM