*takes a sip of coffee, this time a mocha coffee from Dunkin' from the early morning errands, and reminisces back to the 90's*
The 1990's had some of the best sitcoms ever to exist. Not that the 2000's haven't brought us some gems but none of them have really stood out like a few from the 90's. Pretty much everyone has heard of Seinfeld, Friends, Home Improvement and Everybody Loves Raymond just to name a few. It was a great time to watch TV and most of these I currently watch on repeats on multiple channels.
Sometimes though, it's not always the headlining sitcoms that were/are the best. Sometimes you find that gem in the rough you simply laugh your pants off at. One of those sitcoms that comes to mind for me is Becker.
Becker starred the great Ted Danson, who most remember from the NBC hit Cheers, who played the lead in the show as Dr. Becker.
The show took place in NYC in a small doctors office run by Dr. Becker who was cantankerous and easily annoyed by his patients, friends and the world but yet cared about all of it. Which is why his friends and patients stood by his side despite how he may have treated them.
Some of the patient and Dr. Becker interactions were absolutely priceless and left me rolling on the floor laughing.
*takes a sip of coffee remembering some of the interactions and trying not to choke on the sip*
Just last week, I acquired a signed piece in a trade with Dions Autograph Collection of Dr. Becker (Ted Danson) for my TV Collection. 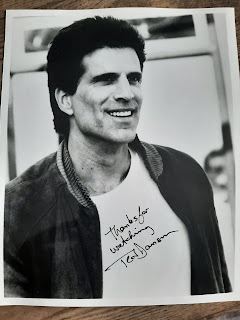 Here is the signed piece 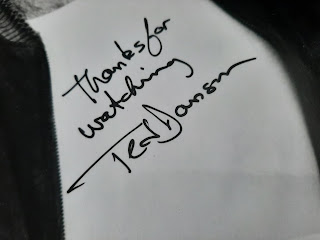 a closer look at the signature.
As always, I am a tad concerned on whether this is an authentic signed piece or maybe a pre-print. The autograph photo came from a friend of Dion's who collected autographs as well. This was either from a signing, fan mail or TTM.
From research I have done, it appears Danson's signature changed a lot from them until now if this is signed by him. This is a clear written out name while newer ones you can read the word Ted with his last name being more of a scribble. If anyone has any input on this would love to hear it.
If this happens to not be real, I will have to acquire a real one with a COA from a respectable company. Either way, this is a cool piece and thanks to Dion for the trade.
*takes a sip before closing out today's post*
Becker ran on CBS from 1998-2004 covering 129 episodes. If you haven't ever heard of it or seen an episode, go find one and I bet you will want to watch the series.
Currently Danson plays on the sitcom Mr. Mayor as the lead after a successful run on The Good Place. Last show I watched him in was CSI where he took over the lead as D.B. Russell. It was odd seeing him play on a drama after many years of doing comedies but he did pretty well in that role.
I would be interested in hearing your favorite Ted Danson show/movie in comments.
*another sip of coffee and on to the rest of my day*
Posted by Matt at 3:30 PM