*takes a sip of afternoon coffee, nothing pairs better with afternoon coffee then a snack. Wonder if I have any cookies kicking around...*
I have been finding myself in a new mood with the hobby in the past two weeks.
That craving, that needing, that wanting to open up packs of cards has suddenly started to diminish. It wasn't something I ever expected to occur, but it has.
The rising cost of hobby boxes/packs along with the retail madness has finally started getting to me. I started to look deeper within my-hobbyself , let's just say visited the inner Mr.Hobbyagi (wax sealed, wax opened) and started seeing those hankerings for a rip starting to dissipate.
How do I know this is true? Opportunities. I have had a few opportunities recently to have something to open but decided against it.
A few examples,
I am not sure what has changed in me, but I didn't feel like giving up cards for packs and would rather turn those trade bait cards into Eli Manning or other cards I need for my personal collection instead of ripping.
WHAT HAS HAPPENED TO ME?!! Did someone pour something in my coffee? Slip a little something in my turnover or sprinkle something on my bagel?
I hope this never happens to me with coffee. What happens if I have an opportunity for a coffee but take an orange juice or even worse....coffee's sister.....tea?
I doubt that will ever happen unless a doctor informs me I can't have coffee and that will be a very cold day in.....well...you know....Vermont.
Does this mean if a pack heads my way from someone I won't open it? Of course I will! That would just be plain silly if I didn't. I mean, the itch won't ever completely go away but it's definitely more subtle recently.
*takes a sip, thinks about the possibility of making a list of available cards for trade to see what I could land for them on here.*
Speaking of pack rips and one that headed my way, I was able to land a pack of 2019-2020 NBA Hoops Premium roughly a month or more ago from Facebook and have kept it sitting in drafts on here. I think with today's post it is time to finally post it.
2019-2020 NBA Hoops Premium was and still is a very popular product. Its another one of those take a base flagship product and throw some chromium technology on it. It was one I really wanted to open, but knew none would be found here (which turned out true) so was able to at least acquire one to open.
So if you haven't seen any yet or you are curious how I did, you know what we must do next.
*takes a sip, begins to rip* 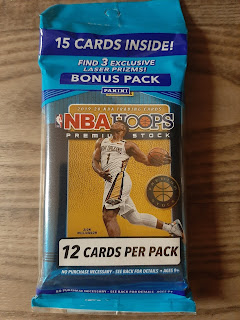 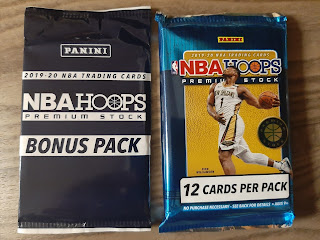 Those 15 cards are broken down to two packs. One pack of 12 cards and one 3-card pack of Lazer parallels. As always, I will save the best pack, the parallels, for last just like the Boston Cream donut in an assorted pack from Dunkin'.
*takes a sip, begins to rip the 12 card pack* 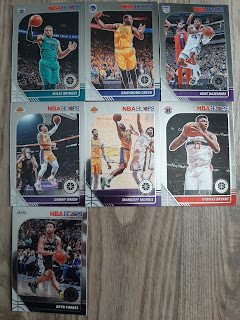 Here are first 7 base cards with not a lot of star power. Leading the way is Draymond and Danny Green. 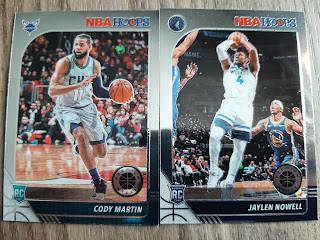 The next two cards are rookies in Cody Martin and Jaylen Nowell. In my mind I picture Zion and Morant. 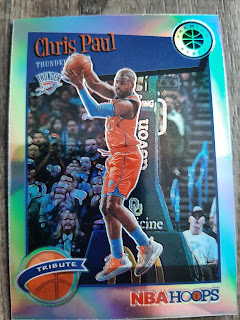 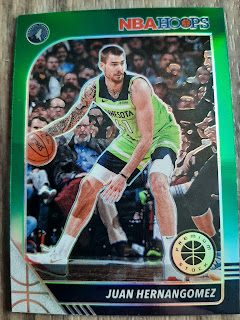 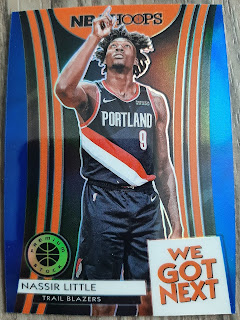 Nassir Little We Got Next Blue Prizm is the final card in the 12 card pack. I like the look of these.
Now onto the 3-card parallel pack of Lazer Prizms.
*takes a sip, begins to rip* 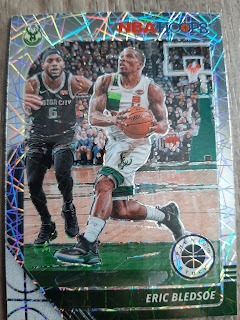 First card, Eric Bledsoe. At least a name I know. 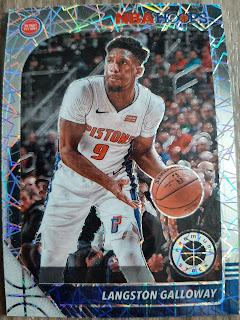 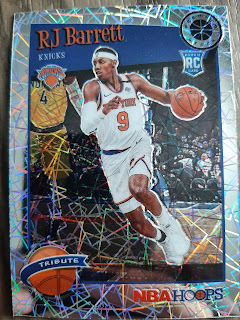 And to end...a nice PC find in a Tribute RJ Barrett!! Best card of the break.
Even though the pack wasn't very strong, unlike this cup of coffee, I still had a lot of fun and would open another if a pack ever headed my way or I actually found some here. I won't trade for any though. For now, I am satisfied with being able to open one.
*finishes up first cup of coffee and already brewing the second cup*
I sure hope my new mode in the hobby continues. I feel idiotic now for some of the trades I made just to land some packs to open. I could have landed some solid cards for my collection but instead opened some packs that mainly had no impact for my personal collection. A little too late now, but at least some lessons were learned.
All I can say is picture that stick figure meme with Don't Be Like and here is what it would say,
This is Matt.
Matt trades good cards for packs to open.
Matt could have landed specific cards for his collection but didn't.
Don't be like Matt.
Posted by Matt at 9:30 AM