*multiple days with posts on here, I am feeling good about this blog and the direction it is heading. It makes this mornings coffee taste even better. It was an early morning but I am ready to put up a fresh post on here. I hope you have your cup in hand, it's time for some Cards Over Coffee*
@OffbeatAllStars knows how much I enjoy collecting sets from the mid to late 90's and knows my list of needs is lengthy, so when he finds some around his house it usually it leads to a trade to help fill some of those needs.
Our last trade helped fill in some gaps and today I will be showing off some of that help in 1996 Topps Gilt Edge.
1996 Topps Gilt Edge set was issued in one series and was only released for one year. The set consisted of a 90 card base which featured 84 members of the 1996 Pro Bowl roster, plus five players who had Pro Bowl-caliber seasons and one checklist card. Each card featured an island tribe background with flames for the AFC Pro Bowlers and Cool Water for the NFC Pro Bowlers. They also featured Topps' new "gilt-edge" technology, placing gold foil edging around every card. There was also a parallel set, Platinum, which changed that gold to silver. Those were found one-per-pack.
At the time in 1996 I didn't quite appreciate the set and only opened a couple of packs. Without rookie cards, I wasn't interested at that time.
Fast forward to now, I am infatuated with collecting it and hope to build the set.
*takes a sip of coffee, reaches over next to him to check out these cards again up close with the Gilt Edge technology. Pretty darn cool unlike my coffee that's burning my tongue*
I have a very long ways to this set still, but any little help is a working progress.
Let's take a look at the AFC first I added in this trade. 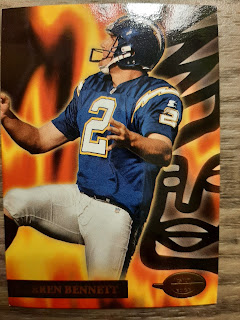 Let's kick it off with how I like my coffee most of the time, warm. Not that I don't mind some iced coffee occasionally in the summer.
*takes a look out the kitchen window to see the 6-8 inches of newly fallen snow, dreams of summer to have iced coffee*
The design is pleasing to the eyes and it's always fun to see a punter get some respect in a set.
Darren was a two-time Pro Bowler, both with the Chargers. I had no idea that later on in his career he went on to play with the Vikings after taking some time away from the NFL. 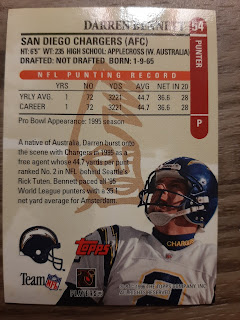 Back of the AFC card 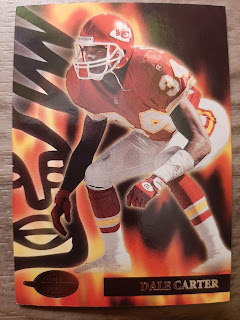 Dale Carter could ball playing in 4 Pro Bowls and 5 teams. 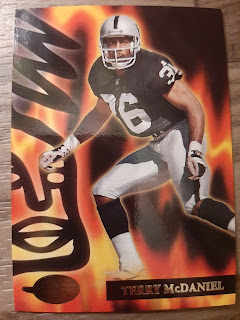 Terry McDaniel was a 5x Pro Bowl corner playing most of his career with the Raiders. 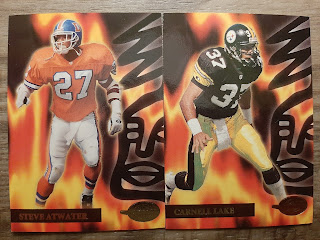 Steve Atwater was a 8x Pro Bowler, 2x Super Bowl champ with the Broncos while Carnell Lake made the Pro Bowl 5x.
Now onto the NFC players I added. 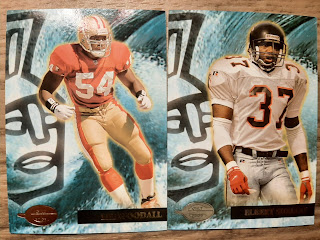 Lee Woodall was a 2x Pro Bowler and a Super Bowl champion and Elbert Shelley is the only player of the group featured today that I didn't know. Come to find out he was a 4x Pro Bowler on Special Teams. Once again, another position that doesn't get a lot of respect when it comes to cardboard. 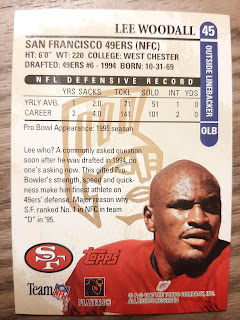