*first post of February on Cards Over Coffee. Bitter cold day, it may be a multiple cup kinda day*
Some collectors chase cards of Hall Of Famers.
Some collectors chase cards of their favorite players.
Some collectors chase cards of certain serial numbering.
Some collectors chase cards of an old man wearing mittens.
This is where I am at with collecting in 2021.
I am having more fun than ever when it comes to collecting and simply collecting cards that I like simply because I like them. Not because someone told me I need to like them. Not because it's a hot player. Not because I can take a certain player to flip.
Just because it's fun.
*takes a sip of coffee, feels a little warmer*
On January 20th, 2021 marked a day in history but probably not the one you are thinking about. It marked the day millions of memes of an older man sitting in a chair with mittens was created. That day marked an internet sensation.
VT Senator Bernie Sanders was the man styling in the meme while wearing a Burton winter coat and mittens created by a VT school teacher out of recycled wool while sitting snugged at the 59th Presidential Inauguration. That one image caught fire overnight and was not only used for many memes, but was also used to raise a ton of money from his internet fame. Sanders created a line of merchandise from stickers to sweatshirts with the image and they all sold out within 30 minutes and raised 1.8 Million for charity which he used for multiple charities in VT. Great gesture by the senator who probably never in his wildest dreams imagined him trying to stay warm would have turned into so much.
The popular image was also used on a Topps Now Inauguration series card and broke some records there as well with that card selling over 90,000 copies. CRAZY!!
There was something fun about wanting to own a copy of that card from the internet sensation-home state-guy that I needed. So I went to Twitter looking for a copy which is my turn-to when I am card hunting.
I posted for three straight days that I wanted a copy, I also want a copy of the J-Lo and Lady Gaga card for my non sport PC, and was looking to trade for one without any responses. I had basically given up and was just going to make it appear on my want list on the blog hoping for help from there. 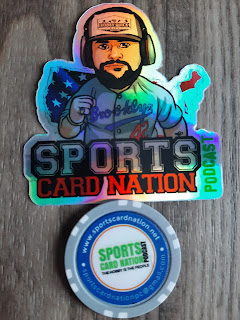 That's when I saw @Sportscardnati1 tweet out that he had grabbed a few copies and I replied to his tweet mentioning how I was looking for one. He responded to that via messaging on Twitter seeking my address. I didn't expect that response but I was more than happy to oblige.
Just a few short days later, 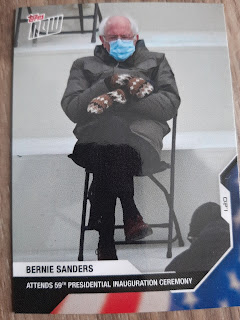 That popular image was in my mail box because of a Random Act Of Kindness. 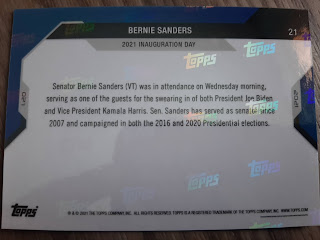 The back of the cards is pretty cool as well with the embedded Topps holograms. Guess it's used so there are no fakes made.
Thanks to @Sportscardnati1 for the card. If you are a fan of Sport Card Podcasts, go give his a listen to in Sports Card Nation Podcast that has new podcasts weekly. One of the best ones out there.
*takes another sip, starts to think about what would be good to go with this coffee today. I have bagels and turnovers to choose from*
With these cold temps I have found myself using my mittens more this week especially to run errands like pumping gas. 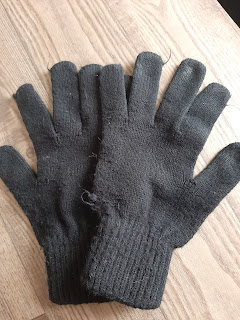 Wonder if I can make my mittens popular. Maybe hold a cup of coffee, pump gas and sing and have someone video or take a picture of me doing so. Well, my singing wouldn't make me popular, it would make you run. However William Hung made a living by his singing.....would I be next...
Odds are though, I will need to work on something more catchy to be Bernie popular.
Posted by Matt at 2:25 PM