*Coffee is ready to go and so am I*

Even though at the time it may not have seem that way, but being a kid was pretty easy. I didn't wake up with back pain, working long days, worry about paying bills and keeping track of life in general.

I simply got up in the morning, possibly had a cup of coffee with mom, then headed outside for the day where I spent hours at a time doing a variety of fun things.

One of those fun things happened around 1994-1995 when I started to get into sports more. Before that, I did a lot of imaginative play as Super Heroes.

My father and I would play a variety of sports against each other but the first one we ever did was backyard basketball. He had found an old basketball rim attached to a deteriorating board (backboard) alongside the road for free on his drive home from work so he stopped, grabbed it and hung it up when he got home.

I didn't know much about the sport other than watching a few games with him, but knew enough of the basics to play a game against him. We would play to twenty one points, each basket was one point unless it was a three point shot which counted for two. He was over 6 ft tall and I was a little above average height for a 10 year old but he still had a mighty advantage.

I was definitely a rookie learning the ropes of how to play and he let me know it. In those days, there was no coddling and letting you win. You simply got beat down and lost. And lose did I ever, again, and again, and again and you get the point. I wished I had gotten the point or any points then.

I am sure research today would show that would being humiliated, destroyed and blown out was a bad approach to a sport, gets your feelings hurt, yada yada. But, not in those days. It made you hungry. It made you want to work hard and practice, practice and practice. I was driven to get better at playing basketball so I could beat him.

I spent countless hours of a summer taking shots, doing free throws, and learning some spin moves. I even created an "NBA League"where I went into a season as the Knicks and played many foes, all of which I would pretend to be and try to make their moves. I even kept track of all of the standings, stats, playoff wins, championship games, etc.

The more I played, the better I was getting. The word rookie could soon be removed but not replaced with pro quite yet. I had to beat the master first.

*takes a sip of coffee, relaxes for half a second before realizing the back pain of sitting in a kitchen chair typing. Well, another sip to put focus elsewhere and do more blogging*

In the 90's, a lot of products included some rookie inserts in them but they weren't rookie cards. They were more similar to the playing level of myself after getting lots of practice.

These are year after rookie sets usually and one that came along with The Diamond King box he sent was one from 1994-1995 Fleer that screamed the 90's and were so eye appealing I couldn't look away. 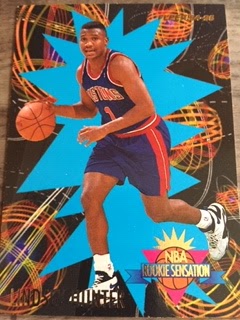 The design featured a weird spacey type background with a player breaking out of some color zone behind him. It's the combo of the background and the colorful background behind the player that really makes this a beautiful piece of cardboard. 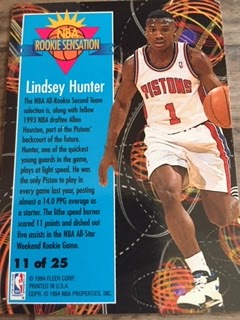 Even the back of the card is pretty outstanding.

And some of the names he sent along brought me back as well. 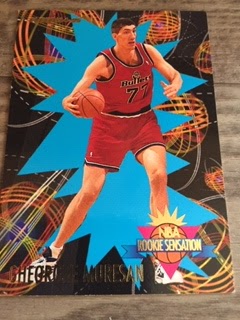 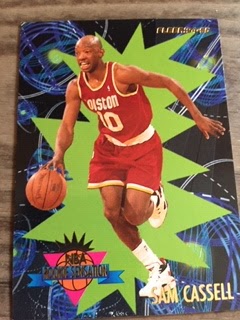 Sam Cassell, just look at that green against the background. 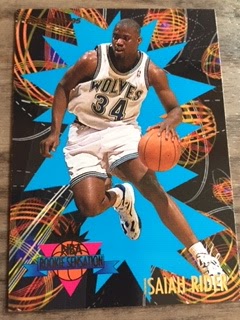 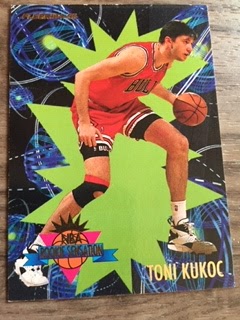 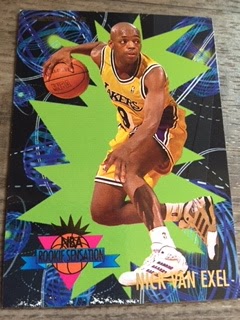 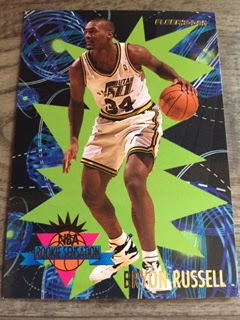 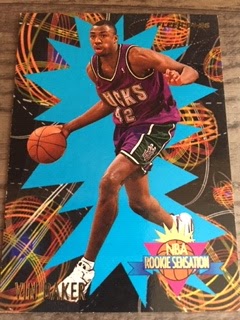 A lot of those guys I was playing as in my solo backyard basketball games. None though ended up in trades to the Knicks which didn't need any extra players with their 90's starting lineup.

The day came where I felt finally ready to take down pops in a one on one game. I had a late afternoon cup of coffee with my mother and sat outside next to the basketball hoop waiting for him to come home from work.

As I sat there, I reflected upon all of the hard work that I put in to try and beat him. It got me pumped and I was raring to go.

That night I put on a show like MJ in the flu game and though the game was close, he still beat me by a point. By a single stinkin' point.

However, that was the last time he ever beat me. That shot of confidence, see what I did there, I had from that game, combined with all of the practice I continued to put in made me a pro. Well of our backyard basketball court.

*cup of coffee done, blog post done, time for breakfast and another cup of course*
Posted by Matt at 7:56 AM