Blogger intro: I have spoiled you readers this week with a fourth consecutive post day. Enjoy it while you can, I can't post every day on here as it is very time consuming to write/create this posts. Some of these even take two days to prepare and up to a few hours.

*not much sleep last night, time to refresh with a cup of hot coffee to keep me awake*

Over the years, my fourth of July's have evolved to pretty much a usual day like today will be. I have nothing special planned, just going to put this post up and get to my usual daily duties.

However, when I was younger, those were the July 4th's I will never forget.

*takes a sip of coffee, now flashing back*

Ah, the good old days of the 90's, July 4th was always exciting. My parents when I was really young would take me to the local fairgrounds where we would fireworks in the car together. We didn't get to watch them every year as things popped up, but the years we did it, it was memorable.

As I got older, we stopped going all together and stayed home to watch what one could call a one man show or as we would call it, Cousin Terry.

He would show up, beer, lawn chair and fireworks in hand and would be the entertainment of the night. He would sit out in his lawn chair, drink a few beers, then use the empty bottles as holders for the fireworks to send them off in. The thing is, when you have had a few, not everything goes as planned....

*takes a sip, smiles, then continues on*

And that's when the real fun would begin.

From a distance,  we would watch Terry burning his fingers lighting the fireworks up (cursing some funny words as well), sometimes setting them off close to himself (he just had to make sure they were lit) and sometimes the bottle would tip over and be aimed at him (think Looney Tunes). Surprisingly, no major injuries ever occurred. Just many laughs.

*another sip, remembers Cousin Terry tripping over his own feet once and landed face first onto the ground. watched him get back up and walk casually to his chair like nothing happened*

*another sip, now onto some cards*

There were some fireworks recently in the mail for myself. And no, they weren't from Cousin Terry. They were from The Diamond King in the big box he sent. The box was full of basketball goodies including some that appear like fireworks and I figured fit the theme of today. 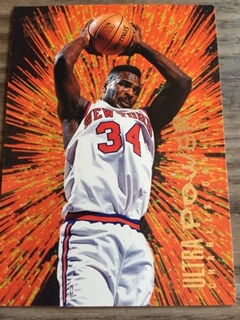 The card design featured a full player cut out and laid over a sparkly, glittery, starburst background that appears there are fireworks behind the player. I chose Charles Oakley to feature because he was a Knick in an era I watched basketball and provided some fireworks during his playing and non playing years on the court both in good and bad ways. 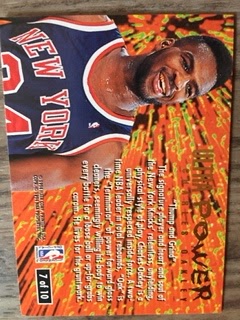 The card back features another shot of the player, a write up and more of those powerful starburst fireworks. They don't feature the sparklyness the front does however.

In all, I now have half of the set thanks to The Diamond King and I can't imagine the rest would be too hard to chase down to complete the set. Charles Barkley, Karl Malone and Shaq will be the toughest to grab.

Here is the rest of them that were in the box, 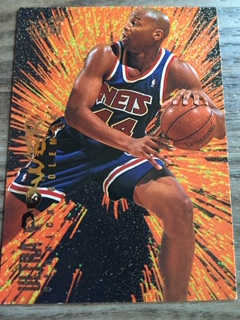 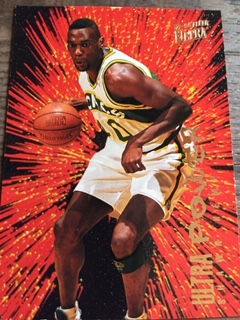 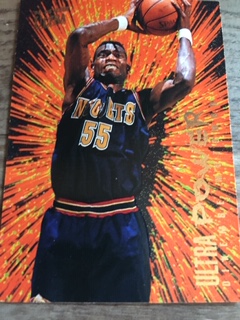 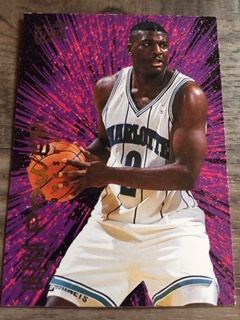 And check out this snazzy Larry Johnson. I am not a fan of purple, but wow, this card looks outstanding.

While I am at it, the other two cards in this set I will need are Dennis Rodman and Chris Webber.

If these aren't fireworks, I don't know what is!

I haven't seen my Cousin Terry in well over 20 years, but it sounded from my other cousin that maybe he smartened up some since those days. Of course he was in his mid 20's back then and now he would be roughly 40ish with a teenager from what I have heard. I would hate to imagine him doing crazy stuff like this now. And there are other Cousin Terry stories to tell another time.

Well, I have decided that maybe I will sort some cards when I find some free time today. I am buried in card projects so it won't be too hard to find one to work on. First I have to close up this post and get some chores done.

So I hope all of you have a Happy 4th of July and stay safe. Remember, DDWTD. Don't Do What Terry Did.
Posted by Matt at 7:40 AM