*sits down with first cup of coffee in front of the keyboard after sleeping in til 7:15 for the first time in almost 20 years, feels great and ready to go. Let's start the day in style*

*toasting my mug to you, holds it for a second waiting to hear an invisible clang because you return toasted*

I gotta admit something to you today, I am easily influenced. Not in a bad way. If I saw you shove your hand up a bees nest because Winnie The Pooh could, I won't do that. Or if you were to lick a toilet seat to prove to the government a virus is a hoax, I won't do that either. Or if you added laxatives to your water bottle to help with your diet and exercise and get yourself to runs, sorry run, more, I won't do that either. Now I am starting to sound like Meatloaf (the singer not the scrumptious piece of meat covered in my special topping).

On the other hand, if my spouse tells me to try an un-coffee drink from Dunkin' because its what she has been drinking, I will try it because it's your spouse and there should be some trust there. Though you may question it because everything you have really ever had from Dunkin' has been in coffee form. So this could lead to trust issues later on. 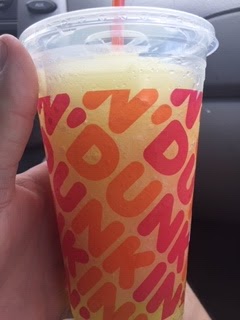 Fortunately for her, she was right. This pineapple drink (I don't know the technical name for it) was delicious and made a great mid morning drink. Could I picture myself waking up to this? Nah. It was good, but I need that aroma of coffee in my house in the morning when I wake up. Then that nice first hot sip, especially in the winters here.

*takes one of those warm sips, then moves on to discuss cardboard*

One of the easier things I am influenced by is cardboard. And I mean easily influenced.

All across the card world, I spy either a card I forgot I wanted to once, a new card release I want a card or cards from or as in today's case, a card I never knew existed but knew I had to have.

I can't remember who posted it on Twitter, but someone tweeted out a  1991-1992 NBA Hoops Will Smith "rookie card" and being the 90's nostalgic loving freak I am, I sought it out. 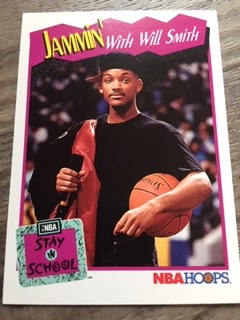 For $1.50 each and .50 shipping total, I landed both copies in the set. This is the first card of the two and you can tell by the design, it's totally 90's and I am totally in awe. This is Bodacious! 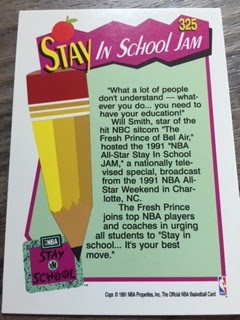 Back of the first card

If I was to pick the true rookie between the two cards, it would be the first. The second one is more like the team photo subset.

Speaking of that second card, 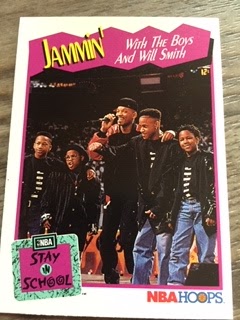 This one features Will Smith joined by a group of students who had perfect attendance as apart of Stay In School promotion. 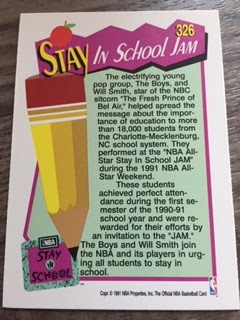 Back of the card gives more details on that.

I have been a Will Smith fan starting with The Fresh Prince of Bel-Air, adding these unknown made cards were solid additions to my non sport PC and I believe are my first Smith cards to my collection.

Also taking a look at these made me remember how much cards were used for promotions/ads like this and things like Don't Do Drugs, etc. It may not hurt a card company today to do something similar today with so much going on. Of course, I would put it in a kid-type product. I don't think too many would be happy to find a cards like these in National Treasures.

*takes another sip, hopes they don't ever create one that says "don't drink coffee". Then takes a bigger sip just in case*

This isn't the first time I have been easily influenced by cardboard, every day I find myself wanting something, then something else and something even more. The thing is and it's a hard realization, you simply just can't have it all. There is too much out there. Just pick and choose which ones mean more to you which once again is a battle in itself.

I have also learned that lesson the tough way with non cardboard and when I think about which coffee creamers I want to try. Just because I am influenced by something new and the word Snickers on the bottle, doesn't mean it's going to be good. Believe me, it's not. Choose wisely folks.

*another sip of non Snickers flavored coffee, now breakfast time*
Posted by Matt at 8:03 AM