*pours himself a cup of coffee, finds a bug floating in it, holds back not wanting coffee, dumps out first cup, grabs a new cup and nothing floating. All is good, let's get to blogging*

Last year I was able to break open a box of Panini's newest line of football line in Luminance and I was hoping to be able to repeat that this year.

Of course it will be hard to top my big pull last year in a Saquon Barkley autograph /75, but I am hoping for the best.

So sit down, grab that fresh cup of coffee and enjoy another Coffee Break with me. 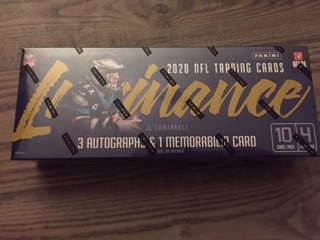 Every hobby box of 2020 Luminance football comes with 4 packs per box with 10 cards per pack. Boxes come with 3 autographs and 1 memorabilia card. Boxes are roughly $210 right now. With the high price, only 40 cards per box, you are hoping there is something decent to be found.

This years base set is built up of 200 cards. 100 rookies and 100 veterans. Within that 100 veterans includes players with their updated teams like one of the biggest ones in.... 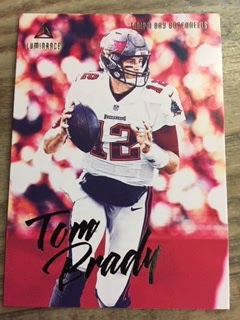 Tom Brady as a Buc. It's his first card as a Buccaneer. This will take awhile to get used to.

The design is almost a clone to last years look with the rough surface, photography and no border look. 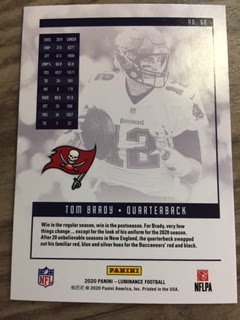 Same goes for the back. I am not too much of a fan of the way the stats are designed. Maybe it's just my hobby OCD.

I wanted to show off a couple other base so you get an idea of what kind of photography that Panini used. 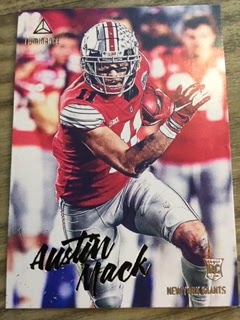 The rookie cards feature players still in their college uniforms 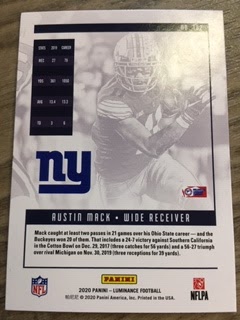 While the backs tell us which teams they are on. I do like that a lot. First product of the year that offers this information.

I will say though, finding the top rookies are not easy. My best rookie pull was Jalen Hurts from this box.

*takes another sip of coffee, thinks about the Giants offense with Jones, Barkley, Lewis, Shepard, Tate, Slayton, Mack, Engram, and a new oline. Smiles, then continues onto the parallels*

There are two different forms of parallels in this product. One for veterans, one for rookies. Here is what you will be looking for, 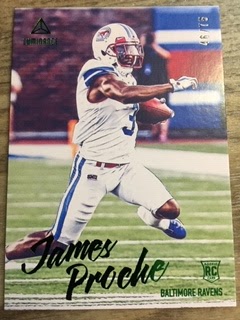 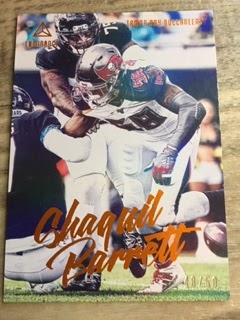 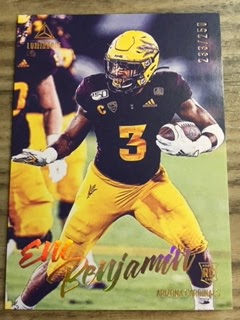 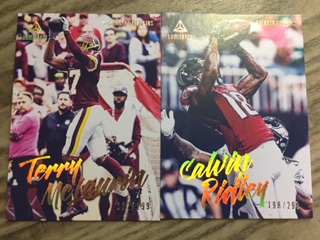 *sneaks in another sip, continues on*

The inserts I wasn't overly impressed with last year, but this year, much different story. The designs and color schemes pop off of the card. 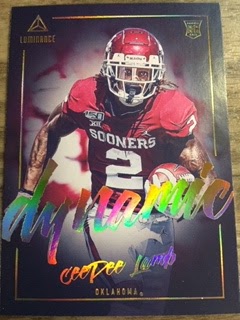 Dynamic CeeDee Lamb. Honestly, I am hoping he isn't Dynamic #GiantsPride. There are 20 of these to collect including rookies and veterans. 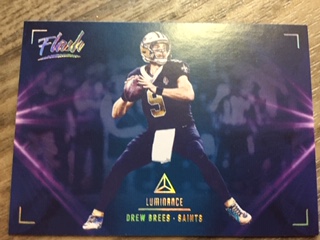 Flash. There are 20 of these to collect as well that includes veterans and legends of the game. I really like the look as if cameras are taking the pictures of the featured players. 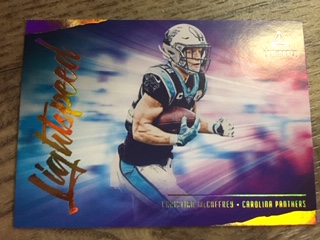 Light Speed. Faster than a speeding McCaffrey. Featured player in the front moving at Lightspeed to the blurred players in the background, well done. There are 20 cards of these as well in the product. 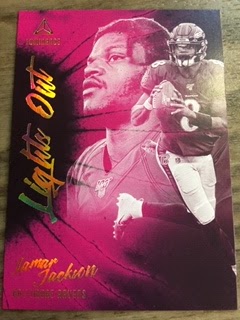 And finally, Lights Out. By far, my favorite of the group. These look so, so good. I was hoping that Jones or Barkley were in this set to chase, but they aren't. At least LT is in here and I will need that without a doubt.

Luminance stays true to itself whether it's base cards, inserts or even hits. You get that feeling throughout the product. I know that sounds weird, but some products look differently at their different levels. 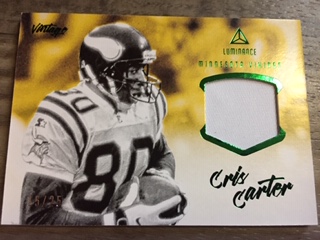 My first hit was this Cris Carter Vintage Materials relic. Not too shabby. I always felt he was underrated. 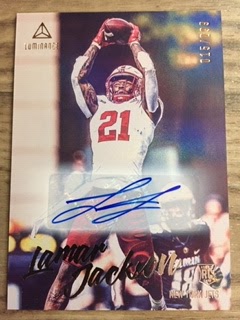 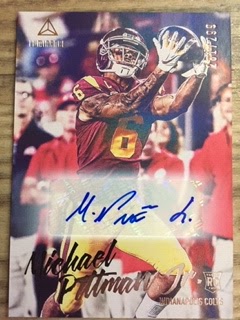 Michael Pittman is my next hit. What an odd autograph. 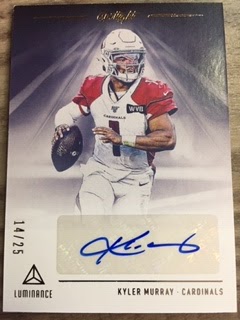 And finally, some strong brew to end this break, a Spotlight Kyler Murray autograph /25.

*coffee mug still shaking in my hand after that last card. My current appearance looks like someone who was up all night and had too much caffeine*

I once again was impressed with this product. Think even more so this year because of the insert improvements over last year. This box wasn't looking too promising at first then the Kyler came and that changed the entire outcome value wise in here.

If you're looking to take a gamble on an early product for this years rookie class, I say look no further than Luminance.

*done typing, gets up to stretch and grab another cup of coffee before the days chores begin*