*Coffee in hand, let's talk about some cards*

Growing up Boss had many meanings to me.

Who's The Boss starring Tony Danza was a show I watched quite often and enjoyed.

There was my father's work Boss who was quite the jerk at the time. I remember the long hours he had to work because of him.

My teachers liked to boss me around or as they called it assigning homework.

Then you always knew on recess who the Boss of the playground was and which one to listen to when they spoke...or else.

And then there was my mother.

My mother was the boss of our house. You did what she told you or there would be consequences. That included my father.

If she asked you to clean something up, you did it.
If she wanted to watch the TV and you were trying to, didn't matter, it was hers
If she wanted you to go to bed at 6:30, you did it
If she didn't want my father buying cards because she felt the hobby was a waste of money....well...he did it still. But, let me tell you, that presented a new challenge in itself.

Every time we bought cards, we would have to find a variety of ways to bring them inside to transfer them to my bedroom without being caught.

We used Jacket pockets, inner shirt pockets, in a newspaper, under the shirts, waited until she was in bed or in the bathroom, and sometimes, I hate to admit to it, even in our underwear. but only the packs not opened of course. You had to get those cards inside no matter the cost!

It was a game, similar to Mouse Trap,as who could get the cards in first without being caught. And it wasn't always smooth sailing either. There were times she nailed us. A forgotten wrapper left in the pocket found in the laundry, a card left behind in the car when she would get in, and sometimes a certain look between my father and I gave it away. Then we would get a long lecture and would play the game all over again. We never fully defeated the big boss you could say if you compared it to Mario. Bowser always hung around.

*smiles behind the cup of joe remembering those moments, then continues to drink it*

Another Boss I remember growing up was this fun insert in 1997-1998 that was put out by Skybox in their Z-Force product called Boss.

These inserts fell 1:6 packs and feature a photo of the player embossed against a hardwood floor background. They look as cool as they sound. 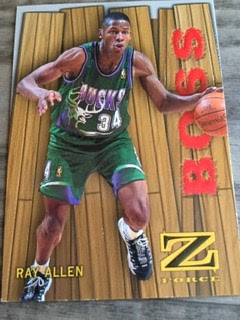 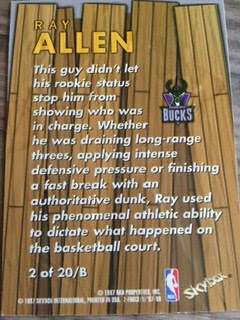 The card back has a small write up and the backside of those boards along with the team logo. There are 20 cards in the set to collect including some big names like Michael Jordan and Kobe Bryant. 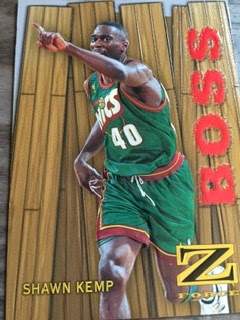 This is a second one I found in the box of goodies was Shawn Kemp who I felt never got enough love on the court or hobby respect.

The Boss inserts also have parallels called Super Boss. Which is just a foil coating and has the word Super overlapping the word Boss. Those fell 1:36 packs. I believe I pulled one back then but don't really remember who it was. Wished I still had it.

*A few sips of cup number one to finish up this cup and this post, then onto cup number 2*

90's inserts will always remain the boss of the hobby especially mine, there is no battling me on that one. I will stand my ground. Cards that look that good and are that creative will trump anything that is presented today.

I should also mention that even though my mother was the boss of the house and the things I said above make her sound like a mean witch, she wasn't. She had a big soft spot especially for me. It also helped me respect her more which is something a lot of kids don't have today for their parents because times are different and you have to go about things differently. I say this often, but change isn't always for the best.

Before I finish, I don't have the big boss battle anymore, I can actually bring my cards inside without any problem as my wife helps support my hobby. I can't say the same for my father who is still battling Bowser after 38 years of marriage and her dislike of the hobby. He needs to find a new block power to help him get by.
Posted by Matt at 3:00 AM