Upper Deck Made Me Happy

*fresh brewed cup of coffee uplifts the spirits on the cool 50 degree fall day. Finding a new box of retail product is also just as uplifting and being able to share my thoughts on this product on my favorite blog is a bonus. It's time for some, #CardsOverCoffee*
I am not a big hockey guy. I don't watch it, don't have any teams or players I follow and I rarely collect it. But, after seeing some previews for Upper Deck's latest hockey product in Metal Universe and knowing my love of the 90's, I was actually hoping to find some to open.
And guess what.....I found a blaster! 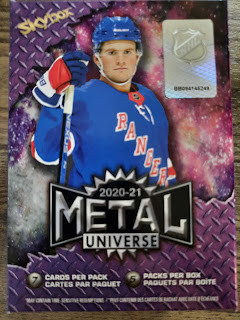 It's just too bad it wasn't at normal blaster price of $20 anymore. I became hesitant after seeing the price of $30 knowing I don't collect hockey that much, but decided in the end the nostalgic me needed to try it. So I did.
Was it worth the gamble? Let's see.
*takes a sip and looks around wondering what should go with this cup. Donuts? Bagel? Toast? Hmm...takes another sip*
I ripped into the first pack and felt the kid in me come back out after seeing the first base card. 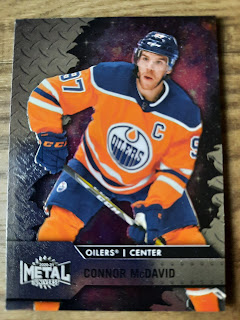 Upper Deck absolutely nailed the base card design. This is exactly what I would have expected from Metal Universe and this design is a mix of all three 90's Metal. 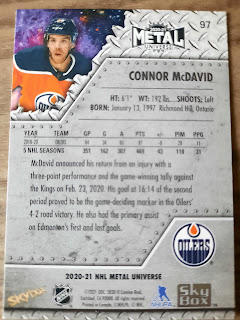 Even the back of the card is perfect.
Here are the other base cards I pulled in the break, 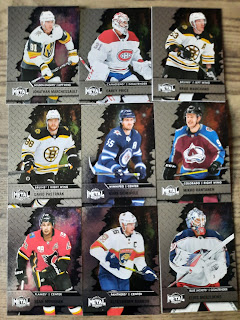 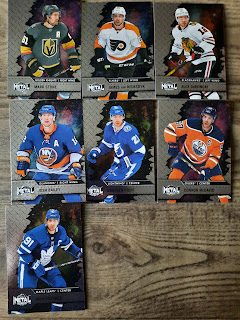 And there are even a couple of subsets that still stick with the theme of the product. Both subsets fall 1:2 packs which makes the chase even more fun.
The subset offerings are, 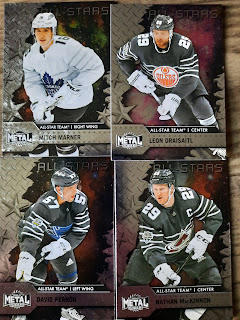 All-Stars keeps the design but adds on Stars to the metal side and the word All-Stars behind the players.
\
And Rookies. I don't collect hockey as I said so I am not sure if any of these guys are good or not, but they still will work great in my rookie card PC. 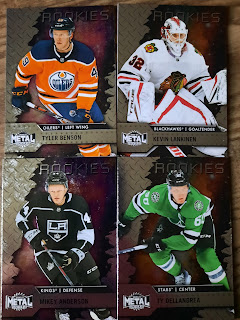 The rookies don't appear to be any different than the base other than the word rookies behind the players.
*takes another sip and is still indecisive on breakfast*
I found a parallel in every pack, not sure how common that is. Blue Spectrum Parallel for base fall 1:2 packs while rookies and All-Stars fall 1:4 packs. 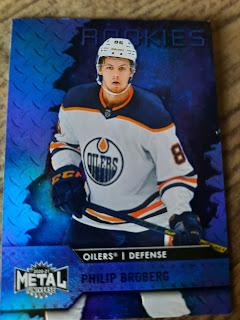 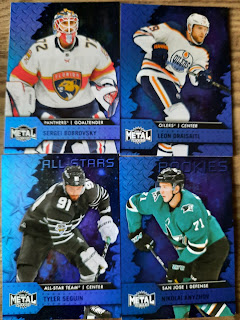 The cards have a shine and are similar to PMG's (Precious Metal Gems) which aren't in this product sadly. 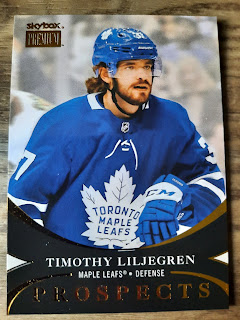 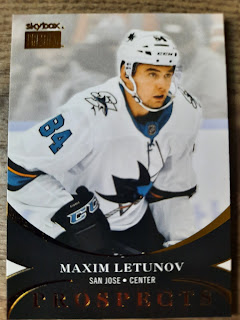 There is some Skybox Premium add-ins however with these Prospects which fall 1:4 packs. 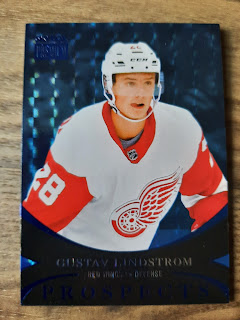 They also have a superfractor looking parallel in Star Sapphire parallel that falls 1:10 packs. 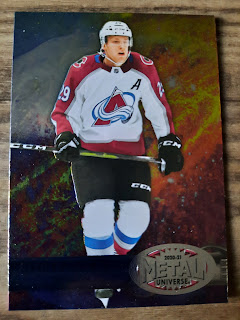 Upper Deck also had me very excited when I found out they did a throwback to the 97-98 Metal Universe set. These fall 1:4 packs. 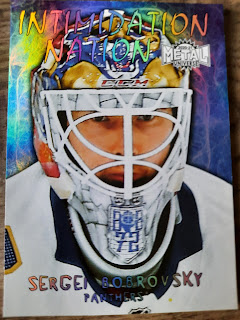 Intimidation Nation is a throwback insert to the late 90's rare insert. These ones are not as rare, but just as stunning. They fall 1:8 packs.
And now my favorite card from the break, 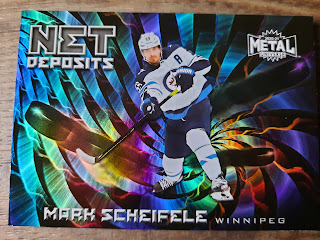 Net Deposits which falls 1:6 packs. What an amazing card and definitely brought me back to the 90's.
*takes a sip before finishing up today's post*
Upper Deck made me happy with this break. Was there any big hits? Not really. Was there any "investing"? No. But, was it a trip back in time and the most fun I have had out of a retail rip this year? ABSOLUTELY. I was left wanting more but may not be able to find more.
So I will end with a thank you Upper Deck for making something this much fun. This was better than the time I found a box of Dunkin' Decaf Coffee Pods hidden behind the caffeinated boxes and believe me, I thought that was the greatest thing ever.
Leave your thoughts below on this product!
*Coffee Card Blogger Out*
Posted by Matt at 2:00 AM