*after an extremely busy morning, it's time to sit down, enjoy a cup of hot coffee on this warm-muggy fall day. Oh, it's also time for some Cards Over Coffee and a little quacking while I am at it, QUACK QUACK QUACK QUACK QUACK!!!!!!!!*
It had been well over 20 years since I watched The Mighty Duck movies so last week I figured it was time to re-watch them again. I think as an adult I thoroughly enjoyed them more than I did when I was a kid.
Watching those movies again reminded me about how great Emilio Estevez is. Movies such as Maximum Overdrive, St.Elmo's Fire (great song to by the way), Young Guns and my favorite of his besides The Mighty Ducks in Breakfast Club.
The reminding led to me to searching for an autograph card of his and I found one pretty quickly made by Leaf Pop Century and snatched it up.
*takes a sip before the card reveal*
I was able to grab this card cheaper than the other versions online and for a low budget collector, that is always a win. 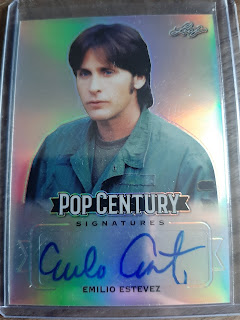 Nice looking card with the shine. The autograph needs some work, but not the worst I have seen. 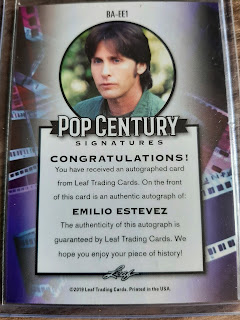 Back of card is kinda lame. I wished they would not only put the guarantee, but maybe some information piece on the actor or actress that lets us know what films they were in.
*takes a sip before finishing up today's post and turns to a hunt of what lunch will be*
I saw there is a new The Mighty Duck series on Disney+ called The Mighty Ducks:The Game Changers I will have to check out. Though my streaming internet here is terrible so I could probably only watch a few episodes a month.
In comments, let me know your favorite Emilio Estevez movie or television appearance and let me know if you have seen that new Disney+ series.
*Coffee Card Blogger Out*
Posted by Matt at 11:26 AM