Falling To The Hobby Trend

I wasn't intending to post on here today, but, after finding out that The Last Dance finale is on tonight, I had to.

*adds creamer and is ready to go*

I haven't watched one episode of The Last Dance honestly, but I have witnessed what its been doing to the hobby. Which right there leads you guys to two questions I bet.

One, why haven't I watched any of The Last Dance? Well, I hated the 90's Bulls, couldn't stand Michael Jordan (at that time) and I didn't want to re-live my Knicks losing to the Bulls time and time again. Which is what I saw a lot of in the 90's not that other teams weren't tortured as well. They were the Patriots of that era, pretty much unbeatable and I hated it.

Second, the hobby has been taken over by inflated values on many of the Michael Jordan cards including Fleer Metal base cards that were pushing the $300 threshold. FOR A STINKIN' BASE CARD. One thing that has been interesting to watch is what cards collectors are targeting and which cards are being driven up because of the show.

Not all Jordans in this price jump have been created equal.

For the fun of it, I recently went through my MJ collection to see what I had, which was nothing special. I think only one card I had was over $25. Not that values mean much to me other than a fun number.

In the past year or so, I started to add a few MJ's to my collection, nothing big, mainly base and a few small inserts, because I started to realize how much he meant to the game of basketball. Not because of a TV show. As I said above, I couldn't stand him in the 90's but it doesn't mean I didn't respect his game. He was and always will be the best. Sorry Lebron and for those who think he is the best. He's good, but he's no MJ.  Just watch The Last Dance, you will see it.

I try not to fall into what I call "the hobby trends", you know the hottest players-cards-products, but occasionally I do and I did this time.

I started to look for MJ cards in trades and eBay.

Which I was okay with. He played in an era I love to collect in. He is needed in some of my insert and base sets I am building from that era and his cards won't ever flop. I don't see the gamble there for myself unlike the times I tried prospecting. I won't ever go back down that trail.

I do find funny that a lot of MJ listings are calling him an "investment". Shouldn't he had always been one? SMH. Investments to me are up-and-coming players you believe could turn out to be the next big superstar. Not a player that is already an established one. 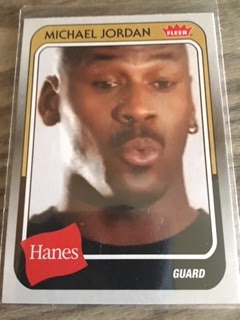 So I started looking at some of those nostalgic cards and his listings like...... 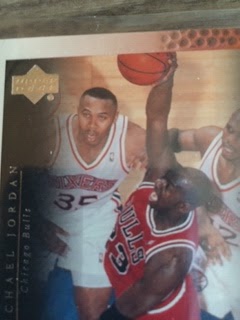 But ended up feeling like Clarence Weatherspoon here. His prices are nuts and too nuts for my low budget.

So I kept looking for any kind of deal. ANY. Just to add a few more MJ's

and I won it. Hey, not the greatest lot but I think it was pretty solid.

And it was MJ so that makes me cool now right? 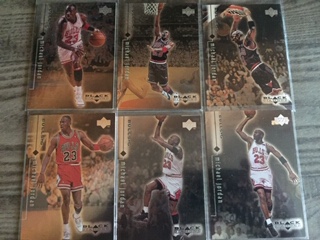 6 Black Diamond. The year Michael retired they dedicated a ton of sets to him and included him as much as possible. You will see some of those below. 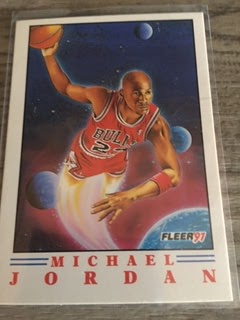 Always love Provisions art. This was a cool looking one with Jordan taking a flight out of this world. It is as close as it gets to a comparison to his game. 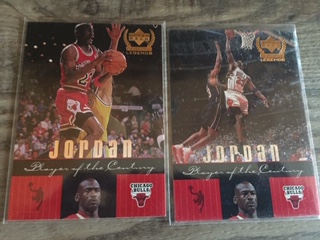 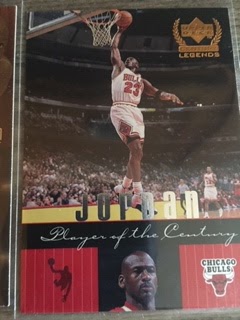 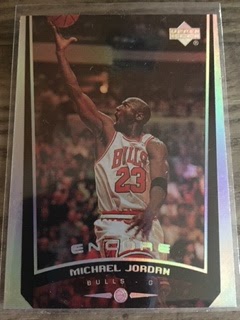 This one really caught my eye with Encore. Always enjoyed that product and it was why I hit the bid submit button 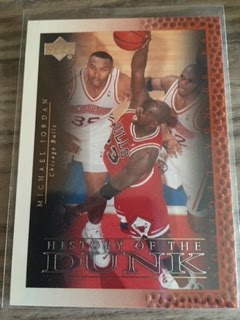 Ovation. Which I showed earlier. Look at that photo, classic MJ 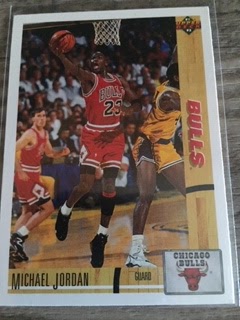 Upper Deck again, this time an older one and again Upper Deck shines through with its photography 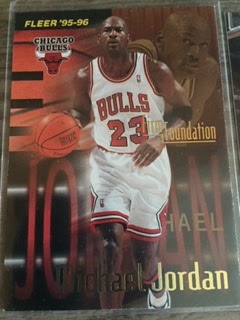 Fleer subset I don't remember much and I bought a lot of Fleer. 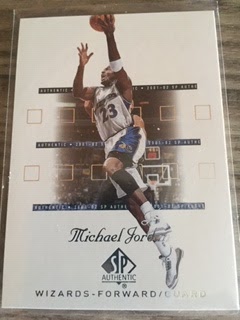 And the final card from the lot, was this card of him in a Wizards uniform. I can't believe he came back after two years to play again. He wasn't quite the same player and it was so odd to see him in a new uniform. This was like the Emmitt Smith in a Cardinals uniform/Brett Favre in Jets/Jerry Rice in Raiders kinda feel thing. It wasn't good.

But, I wasn't done there. I went and found a few more cheap singles. 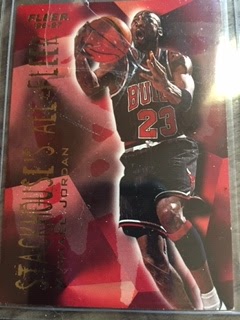 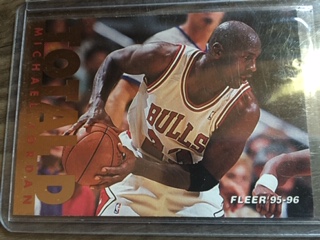 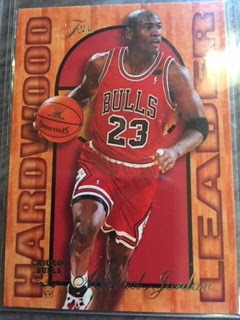 And thanks to @Jake1725 I was able to trade for it. Biggest card in the set now done, just need to find the other 20 cards.

If only now I can land that 1996 Spx MJ to complete my Spx base set.

*final few sips of my cup of coffee*

I think my chase of MJ won't really ever end, I will take whatever I can when I can, but it's not something I will seek out as much now that the trend will be on the downside once the final episode airs tonight. At least that's the way I feel it will happen.

Hobby trends come and go. It's whether you can stay away from the hype or buy into it. I have been on both sides and both sides as of recent. I rode the MJ train home but stayed away from Topps Project 2020 that doesn't interest me whatsoever. Usually when it's a trend, I try to stick with the things that fit within my collecting.

So who knows what the next trend will be. 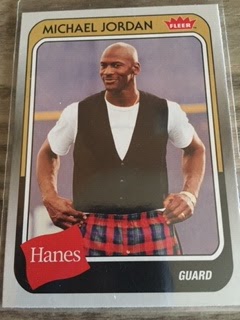 I just hope the next one isn't drinking my coffee while wearing my underwear like this.
Posted by Matt at 12:02 PM