*coffee in hand, good to go*

Every morning my routine is pretty much the same. I get up, grab my glasses, make a quick bathroom trip and head to the coffee maker for my first cup of fresh brew. Once that first cup is in hand, I sit, catch up on Twitter/Facebook then it's either to the computer I go to be here with you guys or off to start the day depending on what time I have left.

Today is Sunday, a day off, so here I am.

*half way through first cup, yeah, one of those mornings*

Usually half way through my second cup I am looking for a breakfast pairing to go along with my coffee. What that pairing may be, depends on the day and what I have in the house.

Some days, it's a muffin (I prefer berry ones or pistachio).

Some days, it's an English muffin (only with butter on it).

Some days, it's a piece of cheesecake.

But most days, it's a bagel. My perfect pairing. 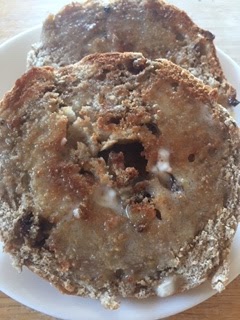 I eat a variety of bagels, mainly with butter but sometimes with veggie cream cheese, but my top two favorites are Asiago and today's flavor, cinnamon/raisin. I don't toast my bagel a ton, just crisp enough unlike my wife who likes it borderline rock, and add just enough butter so I am not clogging the ole arteries faster than they need to be. And it's butter to, not margarine. I grew up hating butter and loving margarine, but as I have gotten older, butter tastes so much better. It's amazing how your tastes change over time.

My tastes have changed for both food and the hobby over time.

Another perfect pairing that I feel got better over time, was Upper Deck getting chromed with its card line of UD Ionix.

I didn't quite fall in love with the product back in 1999, but since then, I have traded for quite a few singles and felt it was time I re-opened a pack of the cards to see how I felt about it now. 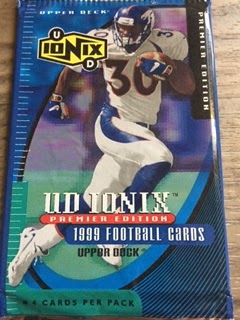 So I searched eBay for a cheap one, and found one for $2.50 and .85 shipped. For that price, I figured it was worth the rip. Each of these packs come with four cards. So as long as each card is worth at least .84, it's worth the gamble. Once again, I am not a guy about value and I prefer the fun aspect a lot more. 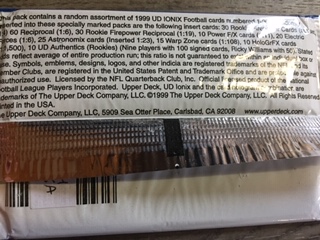 There are a variety of fun and shiny inserts to find along with a chance at autographs. But, as you can see, the odds are ever not in my favor.

*first cup down, next one up. Also half way through my bagel*

Let's see if this pack had anything worthwhile in it. My one fear with opening up older product is the cards sticking together, fortunately, I didn't have any issue with these and I think it's because of the technology. 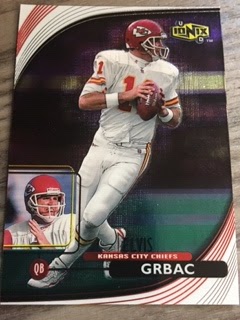 First card, Elvis Grbac. Played for three times, went to the Pro Bowl twice and even won a Super Bowl. He was one of those halfway decent forgotten quarterbacks of his time. 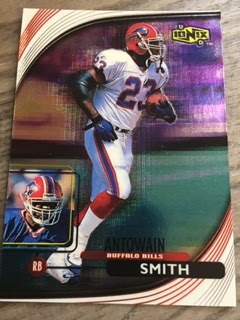 Antowain was one of my first big autograph rookie card pulls of the 90's, but he didn't quite pan out as well as I had hoped. But even still, he played for the Patriots which made him a two time Super Bowl champion. 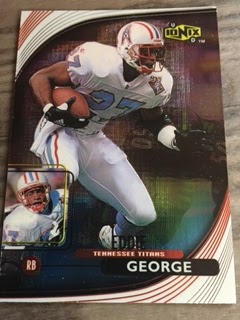 Eddie was a big time running back for the Oilers/Titans. Four time Pro Bowler, jersey number retired for Titans and Ohio State, ROY in 1996, and a few other accolades. I just feel bad that he was another one of those players that went on too long for his career and played one forgettable year for the Cowboys. I wished these guys would just play for the one team for their whole career. 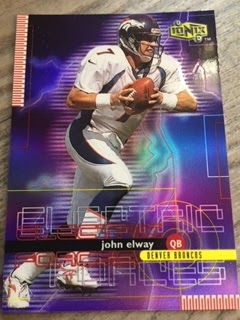 1:6 odds of pulling this Electric Forces John Elway. This card alone made the pack. I enjoyed watching John towards the end of his career even though I was excited when my Giants beat their undefeated team and when the Jags beat them in the playoffs.

That was a lot of fun to open and was exactly what I had hoped for.

*finishes up bagel and second cup of coffee*

Just like my bagel and coffee this morning, Upper Deck having its own line of chromed cards really pairs up well. I may have to grab another pack or two just to open another and maybe keep one sealed for a rainy day. It's just too bad Upper Deck didn't have more to offer me nowadays since it only has a hockey license and I am not a hockey guy.

Someday I hope they will dominate again.

Before I close today's post, I wanted to let you know of another perfect pair I hope you already experience, cards and coffee. And no, that's not my subtle way of promoting this blog more. Well, maybe.
Posted by Matt at 8:24 AM