It's early morning, about 5:30 am where I am. I just woke up, the smell of fresh brew is in the air. I take a look outside hoping to see sun, which I do and no snow so that's gotta be a good sign. However, I see a thick frost on my vehicle and am now hoping that my spring flowers have not died because of it. It's a chilly 25 degrees out but the coffee and house inside is warm.

So that's where I will stay. 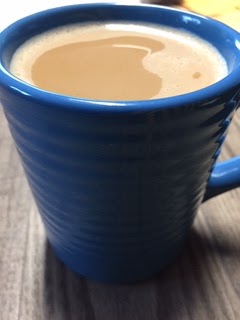 So I grab my cup of coffee, the mug is a new one someone gave me for Easter, and I sit at my table in front of my computer to do some Cards Over Coffee.

Settling. It's the past tense for Settle which means "resolve or reach an agreement about (an argument or problem)"

It's something in life we all do whether we unintentionally do it or recognize the fact that we do it. But we all do it.

Remember that box of cereal you really wanted to have to go with your Saturday Morning cartoons but your younger sister wanted another one and you knew you couldn't win a fight against your parents favorite so you settled for hers? You settled.

How about that 8th grade field trip you could have taken to a baseball stadium and you fought really hard to keep it, but most of your classmates wanted to go to Six Flags so you said that was fine and went with it, you settled.

That time you really had your mind and stomach on pizza but your wife wanted subs, well, any married man knows, you settled with subs.

What about that sports car you wanted your whole life and could afford but realized your life and family situation couldn't allow it so you had to get a minivan, you settled.

Or even that time you told yourself you would get a 1998-1999 Topps Chrome Vince Carter rookie card because of the nostalgia and memories it brought you but your wallet told you otherwise and you ended up with a step down, you settled.

That last one actually wasn't actually an example, it happened to me.

But first, I will tell you the backstory to my want of a 1998-1999 Topps Chrome Vince Carter rookie card.

Back in 1998, I was running "errands" with my father or at least that's what my mother thought. We were actually hitting up the local gas station that served as our hobby shop. They had this rotating white cart that carried card boxes while off to the side on the counter were the opened card boxes to buy packs from that were sitting next to the candy and dog biscuits.

As much as we really wanted to snag a box of something, my father didn't have the funds so we looked on the packs counter and immediately noticed 1998-1999 Topps Chrome basketball. Having bought lots of Chrome in the past for football, baseball and basketball, we knew it was a no-brainer to grab a few packs acknowledging those had the best rookie cards in them.

So we did and got in the car to head home before my mother realized we were gone for a little too long. She always was very suspicious of us, which she should have been.

Knowing how my mom would react if we came home with cards, which we already knew we would have to sneak them in, we opened on the ride home. Yes, my father was driving and busting, not something I recommend doing. Pretty similar to drinking and driving.

As we were opening, all of a sudden,my father jolted. I wasn't sure if he got bit by a bug, spilled his soda on himself...again, or had an allergic reaction but something happened. That's when his shaking hands handed me his opened pack revealing a Vince Carter Topps Chrome rookie refractor on top. We knew we hit it big with the hottest rookie from that class. YOWZERS! And here I was excited myself to just find the base rookie in my two packs I was waiting to tell him about when we got home.

He blew my pull out of the water. Good thing Pack Battles didn't exist then that I knew of.

I remember vividly waiting for the newest Beckett basketball to come out so we could look up the value of the card- that we had no intentions of selling at the time-and it was going for $600. By far the best card we had ever pulled.

It was something I had hoped to take with me some day when I grew up and moved out.

But, sometimes things pop up and since my family wasn't extremely rich, my father had to sell it to his friend to have money for auto repairs. It wasn't easy for this 15 year old at the time to see their best card gone. But, it was what it was.

At least I had the base rookie right?

When I moved out of my parents house my father and I split up the card collection in which I took mostly football and my Ken Griffey Jr collection I worked so hard to build. While forgetting and leaving behind my solid basketball collection including said Topps Chrome rookie. My father only collected for another year after I moved out and then sold it all off. Every last card.

*another sip of coffee. can see the bottom of the mug now*

So here I am over 20 years later slowly adding cards back into my collection I once had.

The past few months I have had my eye on the Topps Chrome Vince Carter rookie (I already know the the refractor version is too rich for my blood go look it up) and was looking to land one under $10. Well, I missed a couple of opportunities for one and then turned down even a couple of $12 and $15 offers I was given.

Am I ever kicking myself now.

Since the Last Dance, prices for the Topps Chrome Vince Carter rookie have exploded for one reason or another along with other 90's cards as most know. So those ones I thought were overpriced at $10-$15 are now $70 and up.

So you guessed it, I had to settle for the next best thing. An unchromed version of the card I landed for $3 and free shipping. 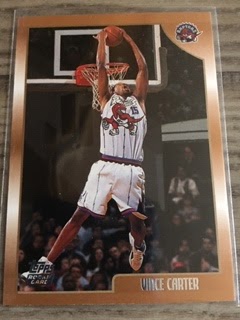 Vince's picture on this card was of him doing what he did best, especially in the 2000 Slam Dunk contest. It's one many have not forgotten. If you haven't seen this man in action, go Google or YouTube that video and be prepared to be amazed. 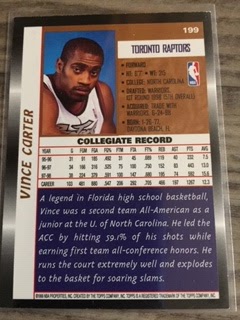 Back of the card.

*final sip of first cup, onto the second cup*

I may not have gotten the card I wanted and had to settle, but at least I got a version of it. Unlike the guy with pizza who had to settle for a sub. Those are not the same.

Will I stay settled on this card forever, I will try not to. But, until I can either trade for one or the prices drop back down under $20, I will have to make the best of what I got and sometimes in life that's enough.
Posted by Matt at 7:11 AM