*getting ready to head out the door for a dentist appointment, fortunately only a cleaning, so need to down a couple of cups and get a new post for Cards Over Coffee up!*
I have found in the last 9 years of being on Social Media Hobby that some of the friends I have made being apart of it are better than the few friends I have nearby. Some are better than some family members and feel like they are apart of your family instead.
These are friendships that go much further and deeper than some pieces of cardboard. These are people who message to check in on you and how you are feeling. These are people who ask how your daughter, son, grandmother, uncle are doing. These are people who go the extra mile to help you out when you need it. These are people who pray for you, cheer you up when you are down and even sometimes send you surprises just because.
I know a few of these people, but the one that comes to mind today is @CardpocalypseNC.
Yesterday in my mail I had an unexpected package from Tim. We hadn't made a trade and were working on one so I had absolutely no idea what was in there. So I opened it up, saw a greeting card that I set aside (I always like saving those for last when I open up any package) and began to dig through many packed layers. There was a bubbler, than bubble wrap, then a Heritage Hanger box, then inside of that was more packaging and then inside of that packaging was this, 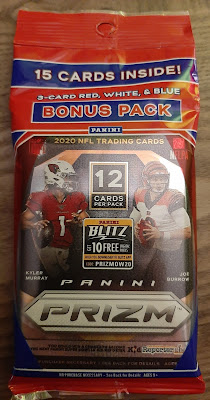 A hanger pack of 2020 Prizm football. I couldn't believe it. It was as if I had unwrapped a wad of cash was my reaction to it. That Indiana Jones feeling when he found the Crystal Skull.
As many of you know, finding retail right now especially Prizm is like finding that a unicorn in your cup of coffee or a winning Powerball ticket on the ground at your feet.
Tim however, had tweeted a picture on Twitter that he had actually found some in the wild back in December and I was certainly jealous. What I didn't know though was he actually took one of those packs and had mailed it to me for Christmas. But, the magic of the mail delays right now made it not arrive until yesterday.
I would certainly call that true sacrifice for a friend.
*takes a sip of coffee while smiling*
The thought of holding onto the pack and waiting for the right moment to open it came across my mind, you know one of those days where you have a really big itch to open one, but I couldn't hold back. So I ripped into the pack, each pack comes with a 12 card Prizm pack along with a 3 card Red,White, Blue parallel pack, and here were my results, 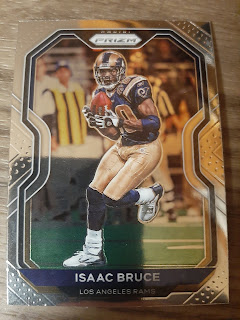 Isaac Bruce kicks off the pack 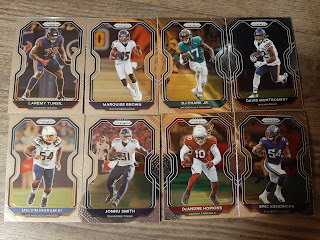 Followed by a group of base led by DeAndre Hopkins 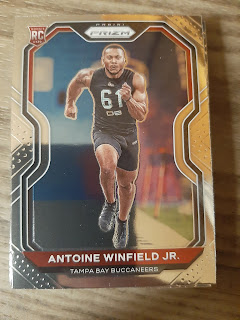 My rookie of the pack was Antoine Winfield Jr. Far from Justin Herbert or Joe Burrow but a solid player in the playoffs. 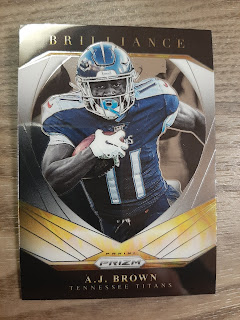 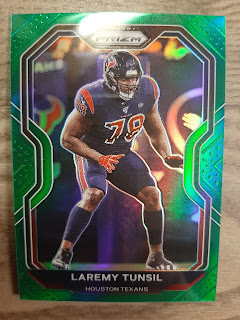 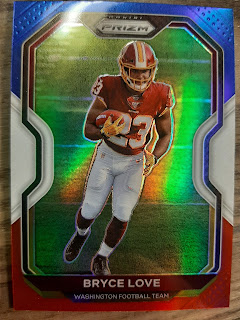 Bryce Love. Seems like I pulled a ton of him last year. 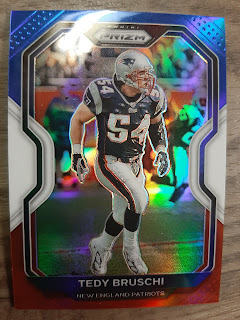 Tedy Bruschi. Long time legendary linebacker for the Patriots
And the final card.... 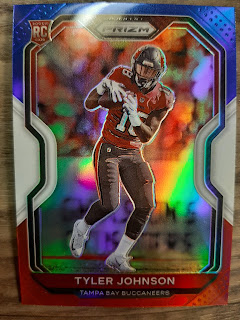 Tyler Johnson. I don't know much about him but with Tampa Bay with so many weapons at that position I can't imagine he gets much playing time.
Nothing too spectacular in this pack, but to me, that's not what this pack was about.
*takes a sip before closing. Okay you got me, I finished the cup*
The pack may not have held the big hit that Tim had hoped I would pull from the greeting card note he left me, but these cards mean more than a Silver Prizm Joe Burrow and that says a lot. Especially to those hit-flipper thrill seekers.
Tim, I know I have told you thanks already multiple times on Twitter but I will say it again. Thank you. Thank you for checking in on me, thank you for the thoughts and prayers, thank you for our long distance pack sized friendship.
What is a pack sized friendship? It's everything you would want in a friendship, or even a pack of cards, packed into one friend. I hope I am also that pack of cards and more to you as well.
Posted by Matt at 8:30 AM