*brews his cup of coffee, pours the last little bit of Peppermint Mocha creamer that's in the bottle and decides that's probably it for the Christmas season on that.*
The New Mentality in the hobby is spreading and spreading fast.
When I got my father back into the hobby three years ago, he was all about adding cards to his collection and opening packs for the thrill of the chase.
Then 2020 hit and he caught The New Mentality.
He started to see how others were making big time money off from retail flips and decided to dip his feet in. That's the starting point of The New Mentality. First it was a fat pack. Then a blaster. Then a blaster and a hanger. And then he started to do the thing I hate most, clearing off most of the shelves of products and even attempting to flip the unflippable products like Score. It had gotten so bad where he wouldn't even tell me what products were on the shelves when I texted for him to pick me up something. He preferred to flip it for more than have me be able to open some.
That was a painful realization.
The New Mentality is an ugly disease in the hobby. It's when greed and money means more than card collecting. It's all about the money and not about the fun. I believe the only cure for people who have caught The New Mentality is to show them how to have fun collecting again.
I am currently working on that with my father. It's a slow, slow cure especially if someone has had that mentality for awhile.
*takes a sip of coffee while game planning the next part of my cure*
Before The New Mentality fully hit him, I was able to land myself one more blaster box from him in trade. It wasn't the hottest product on the shelf but it was better than nothing at the time.
*takes a sip, begins to rip* 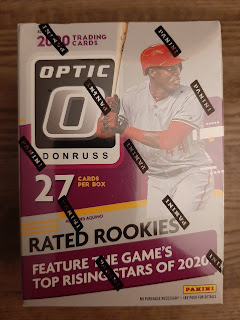 In every blaster box of 2020 Panini Optic baseball, there are 27 cards. There are 6 packs of 4 cards of Optic then an extra 3 card pack of Pink parallels. Each blaster is $20 unless you are buying from a flipper. 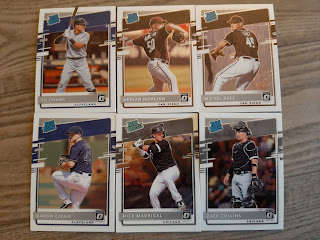 There wasn't much in terms of names of note for base, so I will skip to the rookies which I was impressed with. There was almost two in every pack which seems odd to me. Feels like the last time I ripped Optic on here there was maybe a couple total. 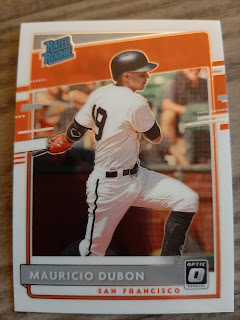 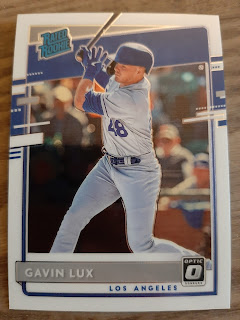 Even found a Gavin Lux Rated Rookie. He's no Luis Robert in terms of value, but maybe down the road he will be.
*takes a sip happy at what I have seen already*
Now onto the shiny stuff and inserts 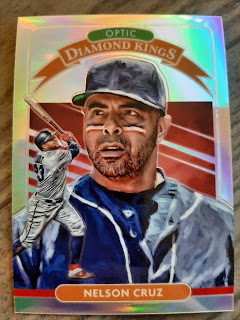 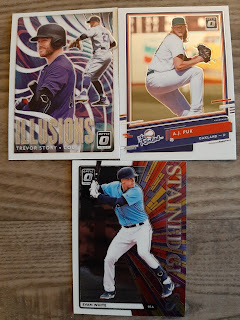 Inserts of Illusions with Trevor Story, The Rookies AJ Puk and Stained Glass with Ketel Marte 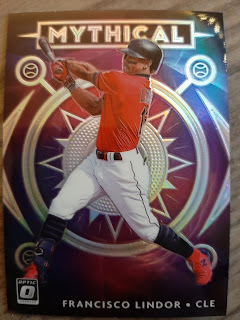 This Lindor was my favorite designed insert of the group, Mythical.
*takes another sip before another rip*
Now onto the bonus Pink Pack Parallels. 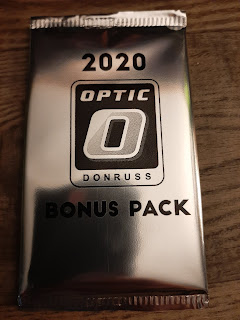 Each of these have three cards. Could be insert parallels, subsets or base. It's all a surprise. 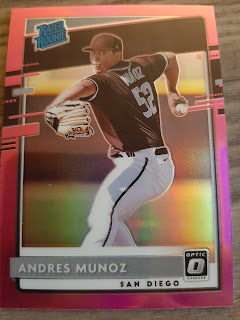 Andres Munoz. Not sure who this is. 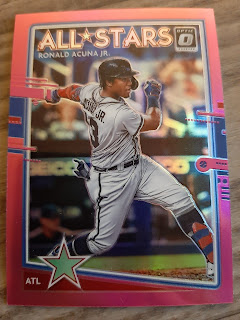 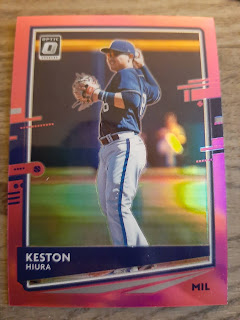 Hiura
Not too bad at all!
*finishes up cup of coffee with the remaining Peppermint Mocha creamer, now back to Hazelnut for the next cup and to finish up this post*
Remember above where I mentioned the spread of The New Mentality is fast, since my father started doing that, others around the area caught it. They have the disease much more than my father does as they follow the vendor store to store to store taking all they can and leaving the scraps. Scraps are known as Hockey cards. This has helped me out some in trying to fix my father's catch of The New Mentality. He isn't getting the opportunities as much to flip anymore and I have been trying to take advantage of that and remind him how great the hobby is just collecting again.
And believe me, collecting is great. So isn't coffee.
Before I close, I wanted to give you some insight on what to look for when you or someone else you know has caught The New Mentality.
Here are the signs to look for to know if you or someone you know has caught it, it's as simple as one, two, three.
It will be pretty obvious when you have or someone you knows does.
How do you know if you are cured or don't have it? Well, that's as simple as one, two, three as well.
I hope this helps. If you or someone you know has caught The New Mentality, remember to remind them why they got into collecting in the first place. It may or may not work but it's worth a try.
Posted by Matt at 5:00 AM