*takes a sip of non black coffee, one thing I haven't ever enjoyed about coffee was it being completely black. Not that I drown mine in creamer to make it all creamer either. It is a little lightened that way I get more coffee than creamer flavor. I think a great cup needs a great balance and today's cup hits that spot*
Black Friday is known to most as a day of shopping, whether that means online or in a store people go crazy for the crazy deals. Sometimes even trampling others to get to them.
Black Friday to me is tomorrow and isn't anything close to shopping or landing a crazy deal. Tomorrow I will be going into surgery to get my kidney stone removed. Well, hopefully removed. The past two surgeries I have had to remove a kidney stone, I have had to go through two surgeries to get the job done. The first surgery usually tells the tale of whether the urologist can reach the stone or not. If they go in and can't get to it because of my "narrow tubes", I apologize for the TMI, I will get a stent put in place and will need a second surgery to remove the stent and stone.
It's all the party that it sounds to be.
*takes a sip of coffee, hopes it can calm down the nerves and stress of tomorrow. Then realizes he can't drink coffee in the morning since can't eat or drink after midnight. Starts drinking this cup faster to get more in today*
One positive at least this week is I found a pack of 2019 Panini Black Friday kicking around so figured to fit the theme of today's post, I would show off the results. I will promise in advance that I won't show off the results of tomorrow's Black Friday though ;) 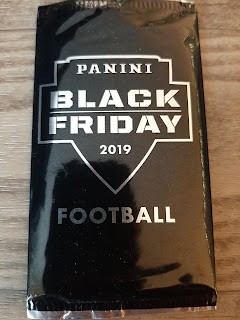 There are two cards per pack of Panini's promo Black Friday packs. It was actually quite sad this year not to see this fun promotion continue. There are some really nice cards that can be found in these packs. I know the odds are against me since the pack is skinny and it's just one pack but I was still hopeful for a possible parallel or autograph. 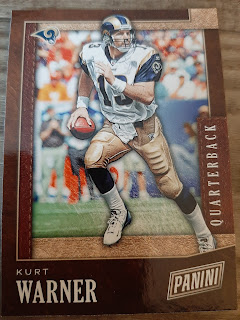 First card, Hall Of Famer Kurt Warner. Kurt was a Super Bowl champ and MVP when he led the Rams to victory in Super Bowl XXXIV over the Tennessee Titans. What an ending to that game with the Titans falling just one yard short of trying to tie the game up. One of those Super Bowl memories I will have.
I am also a fan of Kurt's. He was a NY Giant for one year (I try to chase down cards of him in Big Blue but not too many out there), he is an underdog and who doesn't root for them, and he is a devout Christian which I am all for. 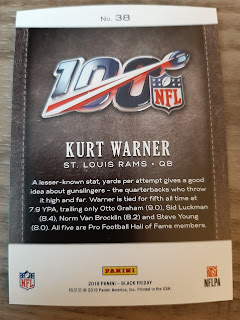 Back of the Warner card.
Next card, Josh Jacobs and it's a rookie. I would have rather found Daniel Jones but not going to complain too much about one of the top players of last year's draft. 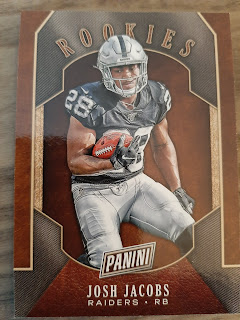 Jacobs is having a great sophomore year and proving he wasn't just a one year wonder for the Raiders last year. Their offense definitely builds themselves around how he does. 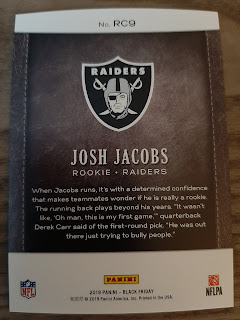 Back of his card which is slightly different than the Warner.
Not too bad of a pack break with a Hall Of Famer and a possible Hall Of Famer.
*takes another sip to finish up the first cup, will pour a second very soon*
I am hopeful they will find a way just to get the stone out with one surgery and hoping not for a second. I know I will be a bit out of it for the rest of the day tomorrow so watch for updates in the near future on here or on Twitter if you follow me there.
Maybe while I am knocked out in anesthesia tomorrow, I will dream about actually landing more of these Black Friday packs or that big screen TV I always ask my wife for. Which will be great until I wake in realization of how my Black Friday actually went.
Posted by Matt at 2:30 PM