*sits down with a huge stack of cards nearby, gets up, makes coffee and sits back down for a new Cards Over Coffee post*
Before I collected NY Giants cards, before I collected 90's inserts, before I collected non-sport cards, before I became known as the Rodney Hampton Super Collector, I was known as the Ken Griffey Jr guy.
Well, at least locally when the hobby was alive here.
I used to trade for Ken, add any item that featured him on it (still have an Easy Cheese canister from 2000) and search for his cards at Card Shows.
But, since I joined the online game with collecting, my Griffey days went to the side. There are so many Griffey collectors online with such massive collections and so many bidding wars on his cards, that a little guy like myself wouldn't match up.
So, I don't really fully collect him anymore but that doesn't mean if a Junior card is offered in a trade to me, that I won't trade for it. Just ask Shane from Cheap Wax Wednesday fame whose latest mail day was loaded with Junior.
*takes a sip before moving onto today's cards* 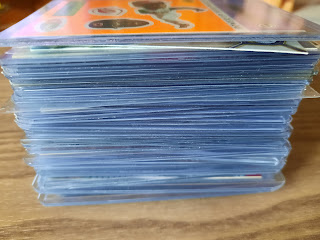 There were so many Griffey's in this mail day that I can't show them all. It would take a miniseries on here to do it. Instead, I had the trouble of narrowing down the stack into my Top 5 favorites from it. 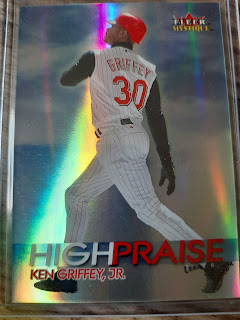 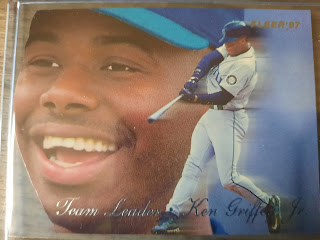 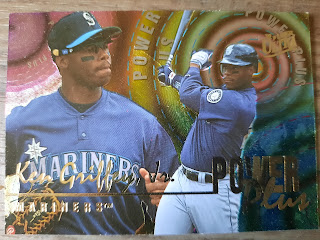 3. 1996 Ultra Power Plus. This insert line kicked around a long time for Ultra with a cool unique design every year. This one is condition sensitive and has micro etching technology. 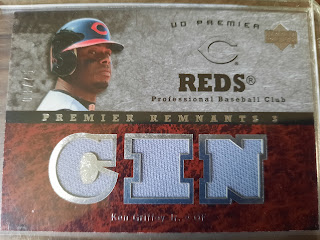 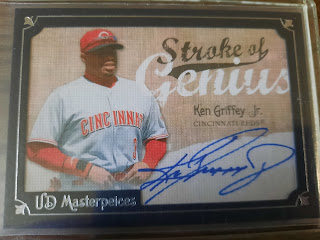 1.2007 UD Masterpieces Stroke Of Genius. It has been years since I added a Junior autograph, mostly because there was never one for trade and the outrageous prices the pandemic drove them up to, but here is a new one. On Card autograph as well. Griffey autos are as sweet as his swing.
Thanks again to Shane for the Griffey's and our massive trade again.
*takes a sip before finishing up today's post*
I guess you can use the term, closet Griffey Collector when you talk about me collecting him. I don't advertise myself as one, but I don't deny it either.
It was nice to add all of these to my collection and hopefully at some point I can add up how many I have again. I know it's over 1,000 different, just not sure how many. For now, I will take Griffey's anytime I can and trade off my dupes for more.
Hope everyone has a great Wednesday.
In comments, let me know if you collect Griffey in any form
*Coffee Card Blogger Out*
Posted by Matt at 8:51 AM