*Takes a sip from a very hot cup of coffee, tongue goes numb for a second but it's okay, the coffee is in*

When I was younger, I always used my time wisely. I didn't waste a single minute because even at that age, I knew, life goes by way too fast. So have fun whenever you can was my approach. So no matter if I was inside or outside, I found a way to not sit around and waste anytime.

INSIDE:
When I wasn't outside, which wasn't very often (it had to have been way too cold or really raining), I found some fun things to do that wasn't sitting down in front of the TV.

I would write first of all. Hundreds of stories, hundreds of comics (I created a series off from Ren and Stimpy called Aaron and Stimpy. It was the adventures of my friend Aaron and the lovable cat Simpy).  I would play with action figures and use my imagination. I would read. I absolutely loved to read, non fiction of course. Then throw some PS1, not a lot, in there later on in the 90's but no matter what I did, I always kept myself busy. I was never bored.

Oh, and there was coffee. I can't forget the coffee when I was a bit older. I should also say there was cards to. At that point in my life, there wasn't Cards Over Coffee 😏. When I finally got into collecting, I spent a lot of time organizing, re-organizing, and writing down EVERY SINGLE CARD I OWNED in a notebook to keep track. Along with that, I would write down their "book values" and keep track of down and up value arrows, etc. I studied the Beckett like it was U.S. History.

OUTSIDE:
Long before the days of the internet, in the 80's and 90's, we had something called outside. I would play out there in snow, rain, sun, sometimes even an occasional rumble of thunder. I would be there from the time I woke up til the time I went for bed (with a few snack breaks in-between)

The outside was a marvelous place where you could use your imagination and let it blossom. I spent a lot of time by myself using mine. I would take myself on this wonderful journeys created in my mind either re-creating myself as Darkwing Duck or Tommy from the Power Rangers or even make myself some new hero I created. I would travel different dimensions, times, planets, etc fighting against the most evil villains ever. My imagination was endless.

Other times, especially as I got older, I would play sports by myself. I found ways to use my garage to bounce a baseball off of and try to catch it. If I dropped it, the player was on base and safe. I created a full MLB league and kept track of stats/standings etc doing so. During the winter, I would do football season. I would throw the ball to myself and dive into snowbanks or try to keep my feet in bounds from doing so while playing as some of my favorite players in the league. I would keep track of stats, standings,etc. Then of course came basketball. I wont' go too far into this sport quite yet, but let's say it was comparable to the other sports I already mentioned.

Why not talk too much about basketball yet, well, that's because The Diamond King sent a lot of it and I have stories to save for another day.

*takes a much cooler sip of coffee, starting to get tongue feeling back*

Back in 1993-1994, Fleer Ultra created a basketball insert set called Inside Outside. This 10 card set was built of guys who dominated inside and outside the rim. These cards fell in random packs of 1993-1994 Fleer Ultra Series 2. I couldn't find the exact odds on these but I assume it was one of the easier inserts to find. 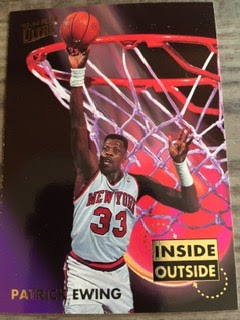 The front of the Patrick Ewing, the number one card in the set, of the card looks pretty cool. A fireball of a basketball flying into huge hoop with player in the forefront. The only place you can find a cool looking insert like this is the 90's. 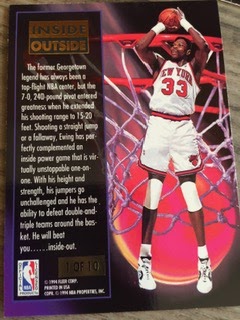 The back has a write up and another new pic of Ewing with the Inside Outside. 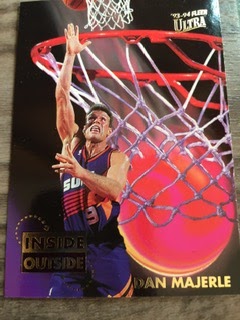 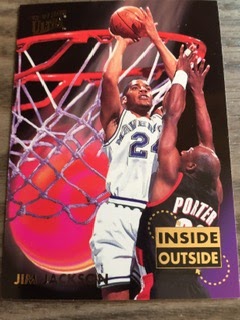 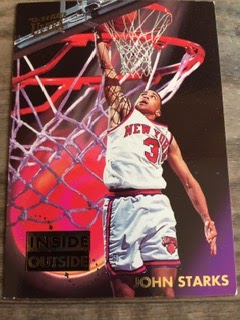 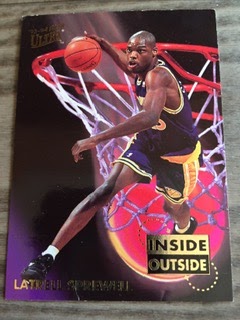 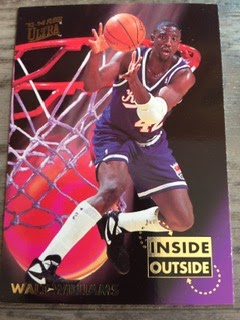 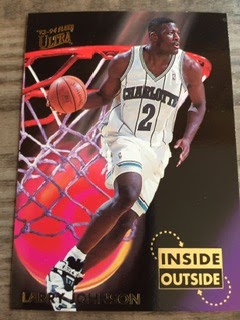 Seven of the ten cards are here and I believe I have the other three. I definitely have the big one in MJ. I pack pulled it about ten years ago. I will let you know in another post if I have the set.

As an adult now, inside and outside has really changed but what hasn't changed is my approach to life. Don't waste a single moment.

OUTSIDE:
Even as an adult, I still prefer to be outside more than in. Unless it's freezing cold or boiling hot. I could handle that more as a kid than I can now.

Gardening, playing wiffle ball with my nephew, taking a walk.

Though I will admit that my imagination is still there, just can't express it the way I used to. How odd would it look if my wife came home from work and I had my action figures out on the table.

Instead, I take a look back on those memories I made and write about them on here. While also have some Cards Over Coffee.
Posted by Matt at 8:43 AM