Retro Cup:Out Of This World

*takes a sip of a new brand of coffee, daaaaannng pretty good. May be out of this world....*

Have you ever had something that tasted so good, that it gave you goosebumps or even made the hair on your arms stand up? Maybe it even gave you that tingly feeling on the inside or even made you smile on the outside? Maybe you even consider it out of this world?

Some of my grandmothers cooking always took me there and it was the oddest of things that she made that brought it home.

Let's take a look at a list of items she made that was so weird, it was good.
This is just some of the items that come to mind first. Some of those items and remembering them just gave me goosebumps.

*takes a giant gulp of this delicious cup of coffee*

The mid to late 90's produced some of the greatest cards EVER. EEEEEEEEVVVEERRR. The base, inserts and even the rare occasional hits were well designed, creative and just plain out of this world.

Recently with the popularity of Fleer (Skybox) Metal coming back for every sport, mainly the Fleer Metal Universe sets from 1997 to 1999, I had forgotten how much I appreciated the set myself and started to dig into my collection just to see what I had. What I didn't realize is I didn't have much. Here I was thinking this whole time I was sitting on a bunch of these to look back on some day but I actually wasn't. So where did my Metal go over the years? I have no idea. Maybe I looked in the wrong spot, maybe my father sold it off. Who knows.

Either way, it was disappointing but I plan to keep looking.

Luckily, my disappointment turned to some happiness when I found some in the box I got from The Diamond King. 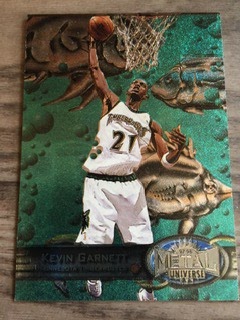 1997-1998 Fleer Metal Universe Kevin Garnett. What other card is etched foil textured and takes a popular basketball player under the sea? None. The only thing missing here is Spongebob. 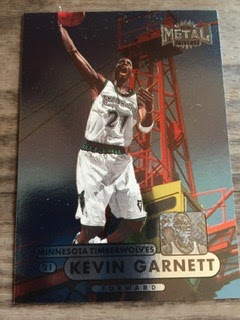 Great background. This was from the 1998-1999 cards. At first glance you would swear it was the same photo as the previous year, but, the facial expression is different. 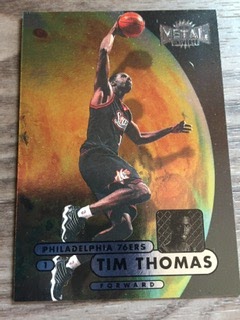 After I saw these three from The Diamond King in hand, I became addicted and wanted even more so I took to Twitter to see if anyone there had any to trade. I had a lot of RT's, but only one response. That one response was from @Offbeatallstars who had a handful he was willing to trade to me.

So fortunately for me, I haven't ever traded with him before, he was as easy as it was trading and we had a deal done pretty fast. I like traders like that. He gets something he can appreciate and I do as well. In the end, we both were really happy and to me that's what really matters in collecting.

Within a few days, his mail day was in hand. Here's what he sent, 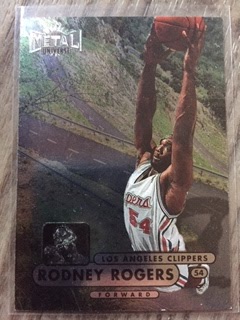 Rodney Rogers who is playing some major street, or I guess you could say interstate ball 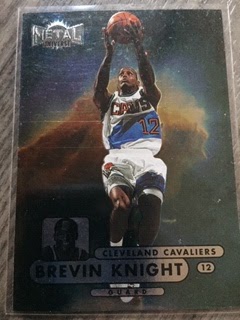 Brevin Knight driving away from a mysterious cloud 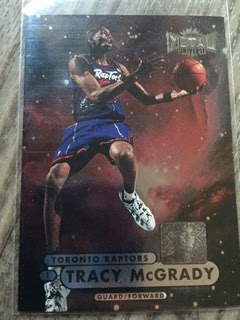 Tracy McGrady in our solar system 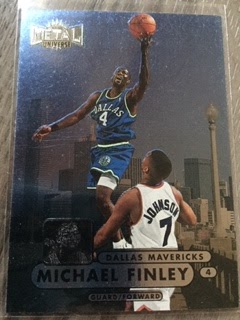 Michael Finley towering over the city 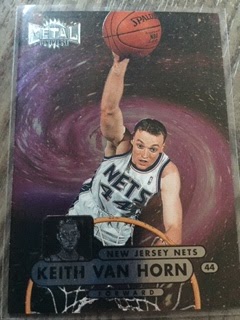 Keith Van Horn, seemed like I always pulled his cards, is jamming away from the milky way 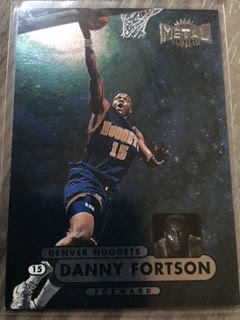 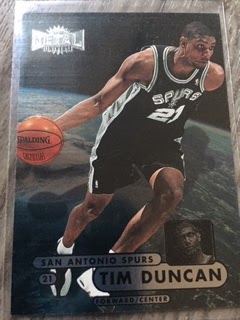 And Tim Duncan playing out of this world.

Appreciate the trade @offbeatallstars! Hope to do it again.

*the final sips of cup one, will lead to cup two but will be done this post before that happens. I am trying to savor every moment of this first cup*

Getting these in hand, gave me that arm hair standing up, goosebump feeling and made me smile. The creativity like this is what we are missing a lot of from today's products. Too much of the same old thing or trying to repeat something that is done gets kinda boring. Sort of like today's food in comparison to my grandmothers.

And yes, I am seeking more Fleer Metal Universe of any player, team and sport. I also feel a hankering for a piece of my grandmother's Raisin Pie to go with this cup of coffee. If only she was around still like Fleer Metal, as I bet she would have been more than happy to have made some and would have put this breakfast out of this world.
Posted by Matt at 8:02 AM