*cups in hand, we are good to go*
Underrated. It means underestimating the extent, value, or importance of  someone or something.

Like this mornings cup of coffee so far, every brew is different depending on how its composed, it's very underrated in comparison to yesterdays. Yesterday's was amazing, today's is pretty solid though despite not giving it as much recognition as yesterdays cup. Yesterday's was the star of the morning and maybe even the week so far.

But, that doesn't mean that today's isn't good and isn't valued to my day.

Underrated can be said for a lot of things in life. Food (my pizza pasta), television (too many comedies to list here that got cancelled before given a chance), movies (Employee Of The Month comes to mind immediately here with a solid cast/funny as they come but didn't get the big screen love), myself as a blogger and hobby enthusiast (feels that way sometimes), our hobby (I think the actual art of collecting cards gets missed a lot with the money aspect being so important to most)and so on and so forth.

Just because those things aren't the headliners, doesn't mean they don't have their importance in life.

If anyone has followed me on any of my blogs over the past eight years, they would know my player collections and they would also know it's not a lineup of mega stars.

It's headlined by Rodney Hampton who had a solid career but once again was underrated when he played in a era with Emmitt Smith and Barry Sanders. Despite some of his numbers and trips to the Pro Bowl. But, he meant a lot to the Giants team and helped carry them to some big wins including a Super Bowl.

Kerry Collins played for many teams but he led the NY Giants to the Super Bowl and had the Panthers on the cusp of one. A lot of times it's forgotten that his career almost ended with some off the field issues but he turned it around and put up multiple 3,000 yard plus seasons. He was a solid QB and was underrated.

RJ Barrett plays for the today Knicks, a brand that's known for losing. And even though RJ was a top draft pick in the last draft for the Knicks in 2020, he put up good numbers but still fell to the wayside of Zion and Morant when it came to the rookie talk both in the hobby and on the court. Even though he averages 14 points a game, he's underrated. (just wait til next year)

And my newest PC chase falls into that category as well.

Allan put up a solid career for the Knicks averaging 17 points a game and could knock down three pointers like no other. But, he still was underrated on the Knicks that had Patrick Ewing, Charles Oakley, John Starks and Larry Johnson already in place when he signed there after his rookie contract ended with the Detroit Pistons. Which means he was really underrated when it came to the whole league despite All Star and USA basketball appearances.

Allan was the player I idolized on the Knicks when I was a kid (John Starks was second place),that I was always pretending to be when playing basketball against classmates while the rest of them were trying to be some guy named Michael. I didn't try to do all of the fancy moves like MJ, I simply sat back and shot threes.

During this recent spike in basketball card interest thanks to the Last Dance, something in me wanted to jump start my already in place Allan Houston PC. It was a side PC forever that I would add a card or two a year to. Recently, I have been adding quite a few and actually lost count of PC numbers that I think are close to if not surpassed 100 different cards now.

My main focus of the Allan Houston PC right now is autographs. I can always trade/add base and cheaper inserts later on.

I had two autographs already in hand but have since added a good amount of cheap ones with so many of his autos out there.

So here is a look at some of my Houston autographs, 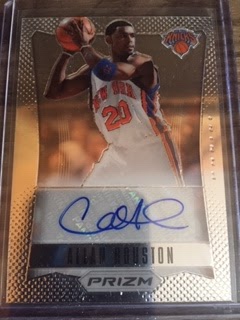 Prizm autograph I acquired from Shane from Project Pedro blog 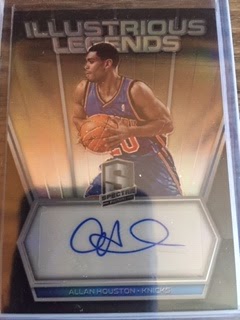 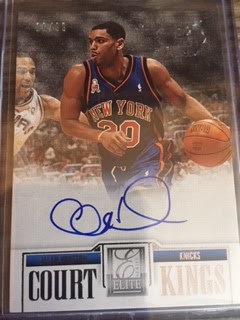 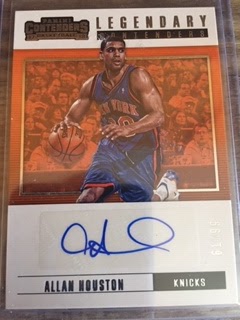 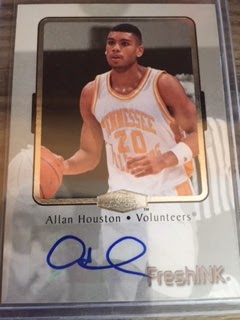 I pulled this one myself from the Fleer Retro product 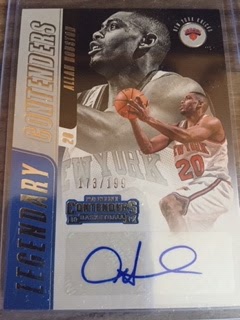 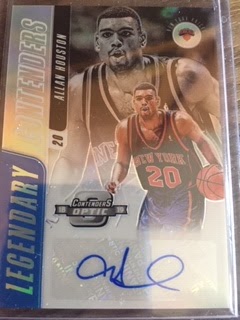 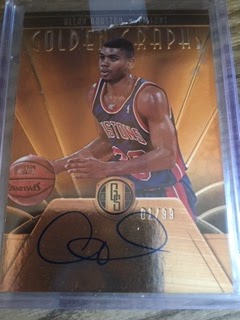 I try to only focus on the Knicks autographs, but I am overall chasing all of Allan's. This was the first Pistons one I grabbed. 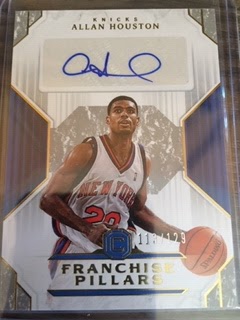 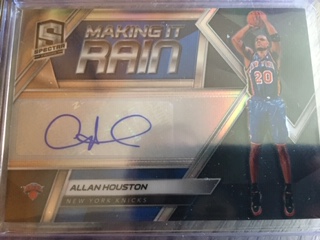 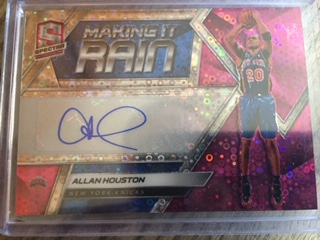 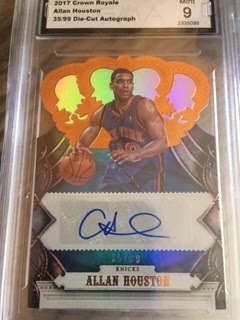 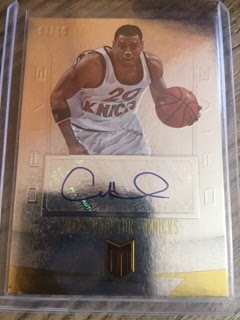 And while I was at it, I was going to show you one more of my favorite Houstons but it's not an autograph..... 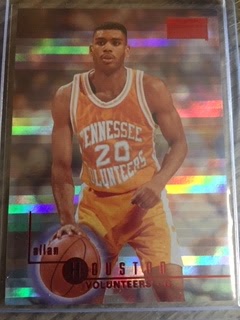 It's a Allan Houston Star Rubies /150 from Upper Deck's Fleer Retro product. That product was amazing overall and is very underrated in the hobby. UD did a pretty spot on job with re-making a lot of the 90's gems that came from Fleer/Skybox and Allan has quite a few cards in the set along with multiple autographs. This is one of the rarer parallel cards to find.

One more thing I want to mention about Allan Houston, I think a lot of people forget how much he helped carry the Knicks in the 90's. Do any of you remember the 1999 season especially the playoffs? Allan nailed a running jumper in the lane with .08 seconds left to carry the 8th seed Knicks to a victory over the 1 seed, and hated, Miami Heat. It was also just the beginning of his run as he helped carry the Knicks to the NBA Finals that year where they would fall to the Spurs despite him averaging over 21 points a game. He had a load on his shoulders that season and playoff run with a team that was decimated by injuries.

Once again, I don't think anyone will ever think/mention that season because well, Allan Houston was underrated. It was something for me though I will never forget.

*shuffles through a couple more Allan Houston cards to see what else I should post, decides to save them for another day, another time*

There are days I feel that Cards Over Coffee, both blog and act of doing so are underrated. I need to think of a way to get the word out there more about this and have more collectors enjoy their mornings with a cup of coffee and some cardboard.

And of course some reading material occasionally to jump in on and discuss.
Posted by Matt at 10:11 AM