*sits down with a freshly brewed cup from the Keurig, was it because his coffee maker was broken? Nope. It's blocked in right now and since life can't go on without coffee, so goes to the second best route*

Why is my coffee maker blocked in? Well, that's because my wife and I have been on a canning spree. 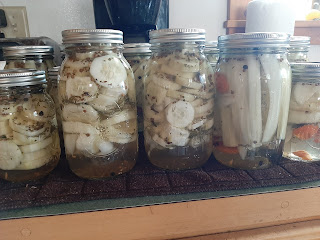 (there's the ole coffee maker in the back) 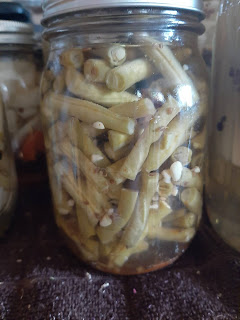 Between the amount of pickles, dilly beans and salsa we have made so far and haven't had the chance to put away yet, there's no counter space for my beloved best friend Mr. Black+Decker. He's the one friend I can usually rely on throughout my day. Always has my back and my fills my soul.

But, it's creeping in on Fall and this is the kind of stuff we do when it is around the corner. Well except buy a bunch of Pumpkin spice stuff, more on that another time. For now, I will enjoy the smells that all of this brings.

I always miss summer with the sun and warm temperatures around this time of year as it starts to get a tad cooler, but there also comes that time where I am ready for it to cool down. It's been one of the hottest summers on record here so I don't mind moving into the next phase. That's what great about having four seasons unlike a lot of places where it's summer all of the time. I wouldn't survive and need the variety in my life.


*takes another sip of coffee, gets ready for the cards portion of this post*

In the hobby, I have also been blocked in by my want list for years. There is so much I want in the cardosphere that I want to keep expanding my list on but I don't. I have been blocked in by whats already on there and don't feel like I should keep adding to it until I knock more down. Occasionally I am able to knock down a card or two, but there are still so many big ones on there that I may never get to accomplish it or be able to add to it.

In my latest trade with Dions Autograph Collection, I really made some headway on a few of those wants. Especially when it comes to my baseball want list.

First up, we will take a look at some football cards I traded for that were not on my want list but were cards I wanted. Yes, there is a difference in that.

Cards On The Want List:Usually dream cards you hope to own
Cards You Want:Spur of the moment, fits your collection cards. 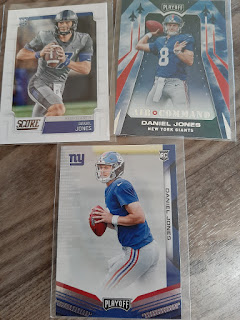 Three more Daniel Jones rookies for the PC. I really need to do a complete number update on my Jones collection. 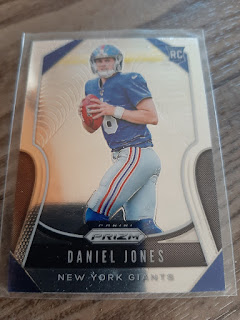 Prizm Jones rookie. This was technically on my want list as I wanted a second one for my PC. Just in case he breaks out and I don't get another. So I will partially count this as a want knocked down despite already owning one. We will get to the real knockdowns soon. 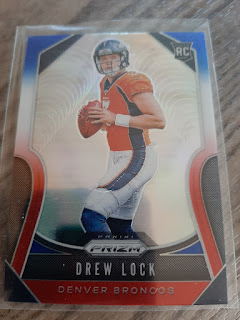 I crossed off a much wanted Drew Lock Prizm rookie a few weeks ago, but, when you see another in a trade you grab it. This time though, its a Red White and Blue version. Prizm sure is pretty. Just like our canning jar of goods.
*another sip of coffee. Looks at his hand of remaining cards and smiles knowing what's remaining to show off*
And now onto the big part of the trade for my want lists. These were actually cards I thought I would never own of Hall Of Famers but finally do now. 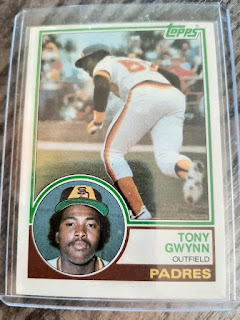 I do own a rookie of Gwynn with the O-Pee-Chee version, but to me it's a knock off to the Topps one and really wanted the real brand. Now I have it. Yes, the centering on it isn't beautiful, but that's not what I am about. I just wanted the rookie card. 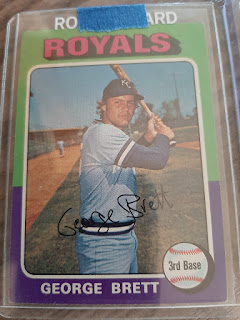 Second card, George Brett rookie. I know many don't care for this design, but I do. I like the color schemes and to me it's one of the iconic Topps designs. 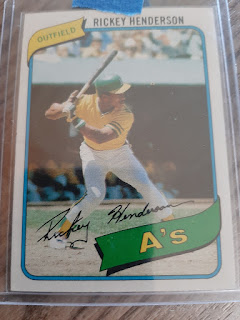 *takes another sip, realizes one more item was stuck behind the Henderson. I guess you can say that Henderson had it blocked in....*
This one wasn't on my want list for basketball, but it's such a cool piece I added it, 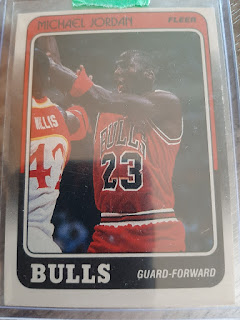 Also in this trade was a 1988 Fleer Michael Jordan sticker. Great centerpiece for my MJ collection.

*few more sips to finish up this post. Trying to decide what breakfast will be*

Three big milestones in this trade knocked down and now my want list needs an update. I will have to look at my baseball want list again to see if there is room to expand or will I still be blocked in by what remains.

I just hope my coffee maker won't be blocked in much longer by an ever expanding canning operation. Will be doing some spaghetti sauce today for the first time but also will be purchasing a shelf hopefully to store this stuff on. I can't go another day without my coffee maker in sight.
Posted by Matt at 7:47 AM