Freshly Perked is a new series that will be focused on my mail days throughout the week. I will only post this series on the weekend whether it's a Saturday or a Sunday to recap my mail days. Hope you enjoy!

This should be a fun new series on the blog that takes a look at cards I don't always show off on all of my social media reaches or even in a regular blog post on here. Not that they aren't as important, but it's more because they are smaller type mail days that don't require a big long rambling.

*goes over to coffee maker to grab a cup before moving into this post, but realizes the coffee maker didn't brew all the way through. Opens up the cover, sees that the a good chunk of the water is still held up with the grounds. Slams the cover back down, gives it another tap and for some reason or another, coffee maker is going. Being resilient for that need of a fresh cup will help you get what you want*

This weeks mail days come from a trade, a steal of a deal and some generosity.

First up, I saw a buddy of mine post a 2020 Prestige Heroes insert of Patrick Mahomes and instantly fell in love. Kinda of like when you see that big coffee mug you simply need.

So I went and found the checklist to see if any Giants players were on it and discovered that Eli Manning was. This led to a tweet by yours truly looking for that said Eli Manning card.

I ended up getting a pretty quick response after my tweet and the person wanted to do a pwe trade in which they were looking to trade for Braves cards. So I spent a good hour looking for a few of equal value and replied to that person's tweet to never hear back from them. There is nothing worse then not responding to someone. That is my biggest pet peeve in the hobby. Well, besides wasting time looking for stuff in a failed trade. This person hit both but I am not one to shout out there names from a hill top in song.

Remember that the next time you try to trade with me. I am looking at all of you.

Fortunately, a Jets fan by the Twitter handle @pbasniper said he had a blue parallel version he would happily pwe for free my way before he threw it away. Read that again and catch the key word Jets fan in there to see why he would toss Eli away.

I was very happy to hear that after my first failed attempt to land this card. 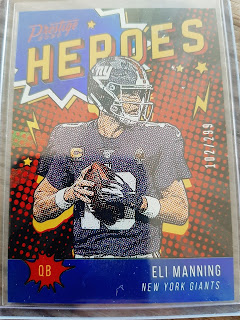 The card arrived in a few days and was as spectacular as I expected, maybe even a little more with the Giants blue also involved. 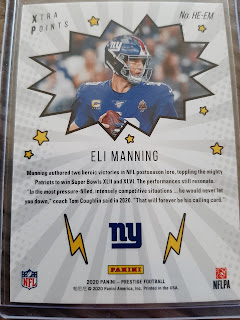 Back of the card showcases more of the fun comic book art creativity.

This would be a fun rainbow chase, but probably a costly one. I will just be happy to own a copy of it.

A well earned thanks to @pbasniper for this mail day.

*takes a sip of coffee feeling better about the missed trade*

Next up, I pulled off a very quick trade with @GarrettAdair who had a couple of Xavier McKinney cards for sale. Yes, I put both trade and for sale in the same sentence. Knowing I couldn't buy, I reached out to Garrett about a trade and he happily obliged knowing they would be going to a good home. 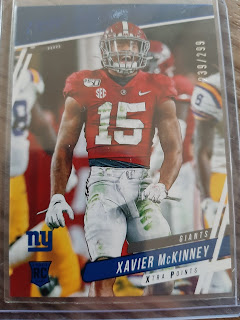 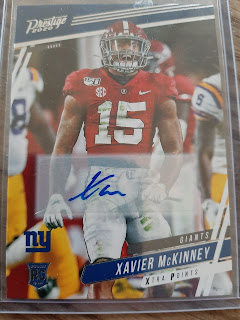 And autograph. My first Xavier autograph and it accomplishes my biggest want out of this years Giants draft class. His signature though, could use some coaching.

Xavier McKinney was a second round pick by the Giants and fills in a much needed position that has been a gaping whole for some time. With him and Peppers side by side, the Giants secondary got a little bit better. Big expectations are all around for Xavier.

Thanks for the trade Garrett!

Finally, my wife could see my disappointment on one of our latest Walmart runs to look for cards and the shelves were so bare I could have set up my blogging station there with laptop and coffee and changed the name to this blog to No Cards Over Coffee.

Which wouldn't be quite as good as this one.

She and I share the same eBay account so she had a notification that one of my cards was ending and landed it for me as a surprise really cheap. I had actually forgotten it was ending. 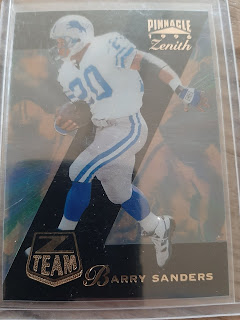 This 1996 Zenith Z-Team Barry Sanders creeps me to only three more cards away from having the set. I am only missing Troy Aikman, Deion Sanders and Dan Marino from completing it. This is a slow moving snail of a 14 year set build. I know someday I will get there but first it would be nice to see a Aikman pop up. None are on eBay from what I can tell.

That does it for the very first Freshly Perked. I will see how this kind of post is received before I do another down the road. As I have said before, mail days for me right now are few and far between so I never know when the next could be!

*takes a sip of coffee, thinks over what breakfast could be today and decides on a bagel.......yes again. *
Posted by Matt at 9:08 AM