*only 48 degrees here this morning, only one thing can warm up such a colder start to the day, a nice hot cup of fresh brew. Pours a cup, brings breakfast along, and gets ready for another Cards Over Coffee*

They come in all shapes and forms, but no matter the form they come in, they are always nice whether it's for yourself or for someone else. It gives you that warm feeling on the inside when you either give one or receive one. You get those butterflies in your stomach of excitement for that grand finale moment when you or another person sees their surprise.

Sometimes those surprises come from the least likely of places. 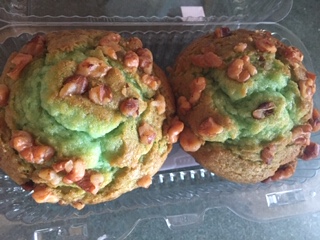 Take these Pistachio muffins. Taking a glance at them you must be thinking disgusting, believe me I did.  I thought with all of that green I would mutate into something if I ate them. At the same time how cool would it be to mutate into a super nut. Though I am a bit nutty it seems at times as it is.

So I didn't try these for the longest time until my wife actually made me try it. Yes, made me. Sort of like one of those wedding cake picturesque moments.

Let me tell you what though, that one bite led me to be a big fan. These are the best stinkin' muffins I have ever had. EVER. And I have eaten a lot of muffins as my stomach shows. These are also coincidentally my breakfast this morning.

That was quite the pleasant surprise and I was happy to had taken the chance on them. Before you ask, no, I did not mutate. At least yet.

Another pleasant surprise I had recently was when a Twitter follower known as @bmw3679 asked for my address out of the blue and said he had checked over my want lists and wanted to send me something.

At first, I was very hesitant on sending someone I hadn't interacted with much my information, but, I was glad I did.

As I said, some surprises come in the least likely of places.

It wasn't too long before I received my mail day from Brad, @bmw3679, and inside the package was some Kerry Collins (posting some other time) and then something wrapped in white paper.

*takes a suspenseful sip of coffee. I expect you to do the same at this point* 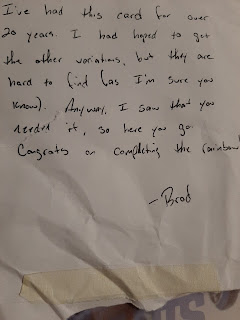 On the outside of the white paper, he wrote this.

I had no idea what could be in there, but whatever it was, it was finishing up a rainbow I was trying for and with so many rainbow attempts out there for me, I had no idea which one it was going to be.

*takes another suspenseful sip of coffee. I expect you to do another at this point* 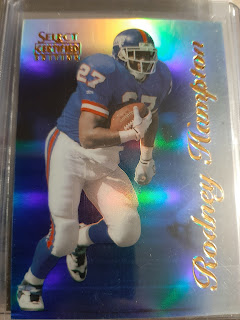 Inserted in packs of 1996 Select Certified football at the odds of 1:200, were these Mirror Blue parallels. The one and only card I was missing from completing my extremely rare and tough 1996 Select Certified rainbow for Rodney Hampton. There were only 50 sets produced of this card. Which may not sound that tough in today's collecting world, but in the world of the 90's these were beyond rare.

So rare I have never seen a Rodney version...EVER. 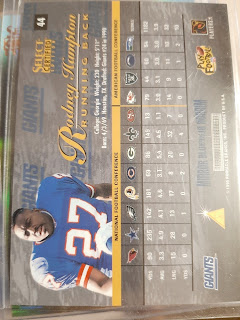 Here is the back of the card. Each of the cards in the rainbow have their own labeling.

But, looking at one of the cards isn't enough. You need to see the beauty of all of them together.

*another sip of coffee before the big reveal* 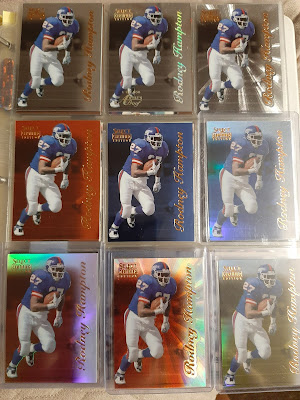 Here is the rainbow all together.

How great does that look? And what a pleasant surprise from the least likely of places.

*another sip for the final part of this post*

I am still in awe of this completed rainbow and I couldn't have done it without the help of a surprise. Many thanks to Brad again for helping me complete this rainbow and I have tucked the note in behind the Mirror Blue so I can always remember and document how it was completed.

As for those pistachio muffins, I could only handle one this morning. They are very heavy but very good. I will let you know if I end up mutating and become a hero.
Posted by Matt at 8:59 AM