It's That Time Of Year 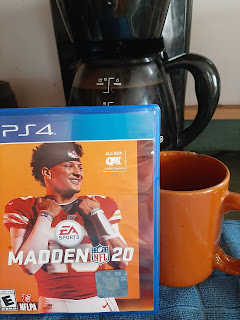 *cup of coffee in hand, ready to blog*

The temperatures are starting to dip and the smell is in the air, fall is creeping upon us.

Fall is Pumpkin flavored everything, sweatshirts, foliage and most importantly, football.

On a normal year, we are blessed to be able to watch some Preseason games around this time-yes I said blessed as I actually enjoy preseason-and right about now it would be winding down. However, it's 2020. There is no preseason and at this point we are hoping to make it through a regular season.

Somewhere in-between the preseason and the regular season is what I consider Madden Season or Madden Holiday. It's when the yearly Madden NFL game releases. It's something I have celebrated on a yearly basis since 1996 but even dabbed into years before that.

This years edition releases tomorrow, unless you are rich and can order the special editions, which is a little later than past years but once again this is 2020. Just like every year, I have the game on preorder and expect a late Friday night playing the latest edition.

It's the one and only video game I play. So I wouldn't consider myself a big time gamer. I don't even play this game online or against anyone else, I play the game the way I have always played it in Franchise Mode against the "computer".

*takes another sip. The warm coffee soothes his soul*

I am sure many of you have read the post title and clicked the link expecting to see some cards, but not today. I do hope you read this at least, but if you skip over it, don't worry, as card posts will return next time.

For those of you still reading, I am going to break down how I play Madden every year.
Once this is all set up, I play. And I "play to win the game."

*another sip of coffee, checks the time to see if it's closer to Madden yet, not close enough so continues to blog. Since the new game isn't here to talk about, decides to talk about the previous game in the meantime*

Winning wasn't easy in the beginning of Madden 20, which will soon be known as the previous years game, or actually for me over the long haul of the game. Which is what I need. I like a good challenge that makes me use my noggin', so after restarting my first season a few times, I finally got my head on straight and started to win more.

By season 3, I was in the Super Bowl and walked away with the trophy. It took me another four seasons to win my second one. I played another three seasons without a Super Bowl before I decided it was time to start all over again and build a new Giants roster.

The newest roster led me to three Super Bowl wins in five seasons. I averaged thirteen wins a season in my final run of the game before I decided after winning my last Super Bowl, it was time to hang up my controller and wait for the newest Madden.

That final Super Bowl though, was one to remember,

The game came down to the final quarter. I took up most of the quarter being down 10-6 and ate up time on my slow drive down the field. I managed to score a touchdown on a screen pass from Kyler Murray (yup I traded for him) to Saquon Barkley to take a 13-10 lead but knew my lead wasn't safe. In the final minute, Patrick Mahomes led his team all the way to my ten yard line. Luckily for me my defense, which was probably the best one I ever had in the game, stopped them at my two yard line on a 4th down play. The game wasn't over yet though. There was still 30 seconds left, they had two time outs and I needed to get out of my end zone so I wouldn't get a safety and give them two points and a chance. There was only one decision this coach had to make, hand the ball to my play maker, but make him run up the left side where the line is stronger. So that's what I did and it paid off with a 8 yard run getting me out of the end zone and where I ran the game clock out.

(dance breaks to Flashdance what a feeling)

Now onto the celebratory pictures. Yes, I document every Super Bowl win. 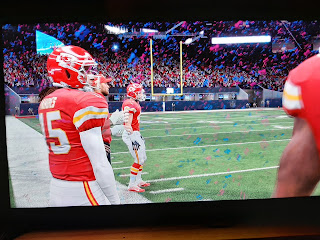 Patrick Mahomes looks on disappointed as the confetti falls 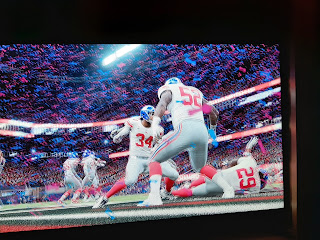 As my team celebrates midfield 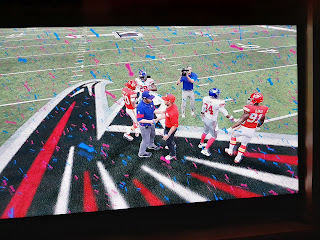 I shake hands with their coach, that's no longer Andy Reid at this point in the game 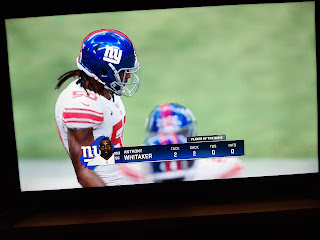 Super Bowl MVP. This linebacker had 40 sacks and was the seasons MVP as well. I drafted him in the second round. Quite the player. 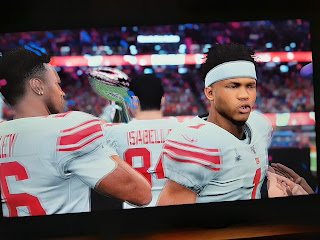 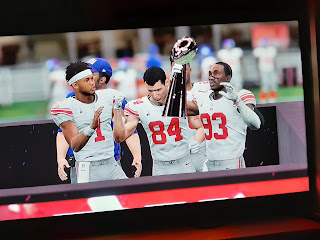 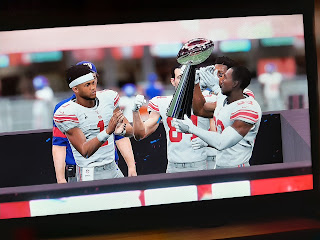 It's not quite as good as your real team winning a Super Bowl, but ranks pretty high up there with how you feel when you take home the trophy.

*takes another sip of coffee before closing*

In roughly 31 hours, the newest edition of Madden should arrive at my doorstep and take some time away from my card hobby. But, you know what, sometimes a break from the card hobby isn't a bad thing. I have been seeing a lot of political/angry/fed up card collectors all across social media so a quick step away, especially right now, isn't a terrible thing.
Posted by Matt at 7:19 AM