*sits down to his already second cup of coffee of the early morning. Looks over his shoulder at the breakfast offerings and is intrigued on which ones to pick...what will the decision be?*

As the days of September roll on, the cooler weather has started coming in. This means foliage, football and the taste of fall to have with my coffee.

My wife and I were stuck in line at the grocery store just waiting to get to checkout, that's when we noticed a nearby display of some tantalizing treats.

Everyone knows that every grocery store is as evil as the Amityville house. They purposely know that you haven't had lunch, they put their best baked goods up front and purposely have their cashiers go slower than squeezing honey out of a bottle to make you stare, drool, and be tempted to grab those items. Which works pretty much every time.

And on that day, it targeted us and knew we hadn't eaten lunch yet and were waiting what felt like years in line. If you haven't also noticed, a lot of these evil grocery stores will stick the 80 year old cashier on while the 20 year old bags the groceries. Why not switch that around? Well, the baked goods wouldn't end up in your cart that way....and that's what a variety of donuts did that day.

(another evil store laugh, this time insert Jack Nicholson with the Joker laugh)

*takes another sip of coffee, begins to open up one of the packages of donuts*

The taste of fall offering is what we grabbed that day. 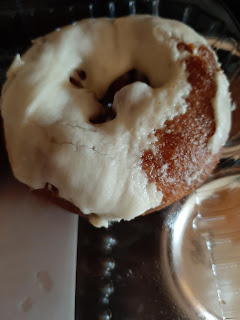 This is a Pumpkin with cream cheese frosting 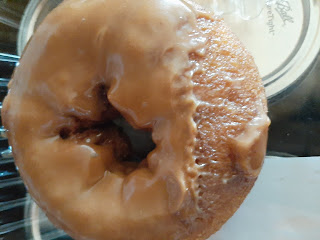 This is an Apple Cider one with caramel topping 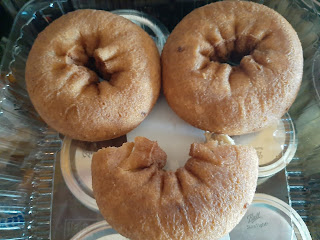 And there were plain versions to both as well with Pumpkin Spice and Apple Cider. Which after trying a couple made me feel, well, the donuts explain it the best.

*decides on a plain pumpkin to go with this cup of coffee, grabs one and closes the lid. Even though I could eat a few, gotta limit my intake right now with a few health issues lingering*

In the hobby, just like at the grocery store, there are evils that lie beneath the surface. Some are obvious, some are not. Some are used to manipulate your mind into telling you that you need something when you most likely don't. You know, those donuts.

One of those evils took over me.

Something supernatural in 2019 made me want to start collecting some Patrick Mahomes cards. I don't know if it's because his cards were hot/popular, because he is likable, or is it because of the underlying money value. For whatever evil reason, I started a very small PC of him that I have been adding to.

A couple of months ago, I was looking to add a few cards of Patrick and found an unopened pack of 2017 Elite Draft listed on eBay. Instead of buying the Elite Draft rookie card outright for $25-$30, I decided instead to grab the pack for half that. Figured it was worth the shot if I could land it for cheaper and who doesn't like a fun rip. I also noticed that these packs usually sell for as much as the rookie card and that I had stumbled upon a deal at the time.

*takes a sip, begins to rip* 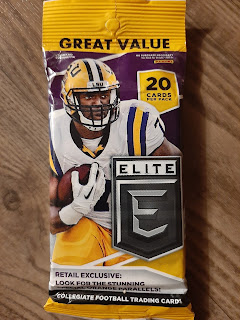 *takes a sip before sifting through cards* 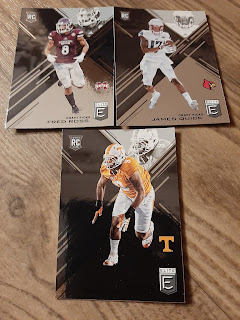 There are 199 cards in the base set, for some reason there is no card 101, this is very paranormal, and features 100 veterans. My pack had 12 veteran base cards within. 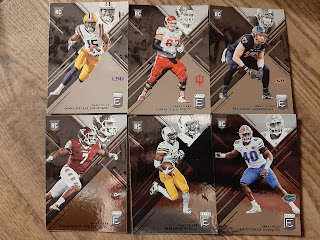 The next 7 cards in my pack were rookies. With 99 rookies in the base set, landing the Mahomes wasn't going to be easy. And as I expected, it wasn't. Not much to brag about in this group.... 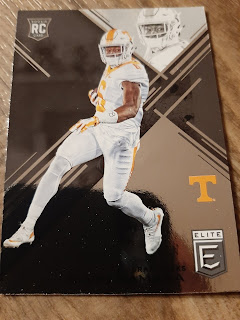 But I did land one of the top rookies of that draft in Alvin Kamara. I would place him third behind Mahomes and Watson, so not going to complain. 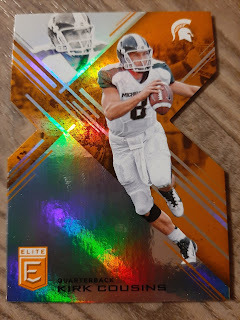 My last hope was the orange die cut parallel for my Mahomes.....nope. Some QB named Kirk Cousins. Angelic designed one however.

It was a fun try in this pack. The Cousins looks nice and I did land a Kamara so not too much to complain about. Some of the pack will be PC adds, while the rest heads to trade bait which is a win in my books.

*takes another bite of doughnut, another sip or two or three of coffee and tries to sum up this post*

My Mahomes PC may be missing this Elite Draft rookie, but I did manage to add other rookie cards in trades,some I had and even discovered I had recently. Been adding some base, inserts and parallels when I can to. Something that started out on a whim has grown. It's just me and Mahom(i)es.

The doughnut PC however, has some HOLES now but I am still fulFILLED by it.

I wished the grocery store was set up like it used to be in the 90's when they had packs of cards upfront by the register, that is something I could go for and no longer worry about their bakery evil goodness. Well, maybe.

*cup of coffee done, corny jokes have been had and this blogger is out*