A Clip From A Movie

*wakes up, drags self out of bed and decides to distract self with a new cards over coffee post. grabs a mug, forgets to fill it with coffee, does so, then sits. opens laptop and starts typing what you are reading now. let's get this going*
Drinking coffee, collecting sport cards are not the only things that have been a big part of my life and bring back memories and nostalgia, but movies and television do as well. If not bigger than the first two.
It's also what a lot of my non sport collection is based off from. Yes, I will pick up non sport autographs, relics and base cards that have nothing to do with my past, but most of the time whatever is featured on the card/photograph, plays a role in some form or memory or nostalgia.
When I saw my buddy @clrshonuff post some cool Movie Clip relic cards from Historic Americans he was collecting, I had to seek out a checklist to see if any would fit my collection.
Fortunately for me, @clrshonuff came through with some screen shots of it immediately.

My biggest wish was that there was a National Lampoons Christmas Vacation version of these I could track all down of. But no such luck.
However, there were a few other films I could choose from which had their own memories so I was good with that. But, I expect Christmas Vacation next time Historic Autographs.
*takes a gulp. yup, we are beyond a sip this morning. moves onto the rest of the post*
Even though I wanted to tackle movies like Austin Powers and Space Jam first, I started with two kids films first. 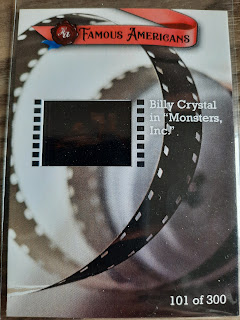 I really enjoyed the movie Monsters Inc which released in 2001.
The film cel I found was one of my favorite scenes from the movie and a line that I use in different forms. 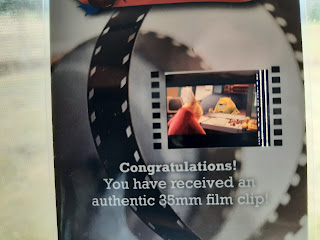 *holds card up to the light so you can see the film cel*
"Wazowski, you didn’t file your paperwork"
Or in case of this blog,
"Matt, you didn't post these cards when you got them"
Or
"Matt, you didn't brew yourself another cup of coffee"
The line is very versatile.
The next two cards I grabbed, came as a two-card lot from the movie Ice Age which was very memorable for me.
*takes another gulp*
In March of 2002, I met who would end up being my wife while we both worked at a local grocery store. On our first date, we chose the movie Ice Age to go and see. I am not sure why we chose that movie but we did.
I remember a little girl sitting in front of us who she used to babysit watch us all night. I also remember it taking me half of the movie to make my first move and hold her hand. I also remember how much we laughed at the movie especially the scenes where the acorn-obsessed saber-toothed squirrel Scrat was involved. 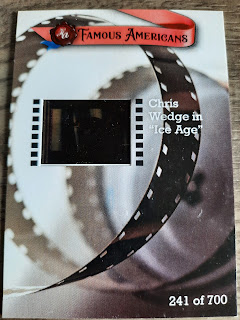 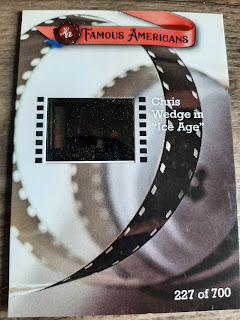 So, I was able to find two cards featuring Scrat. *holds card up to the light so you can see the film cel*
As you can see, Scrat is trying to land that acorn.
That first date led to us going on more and getting engaged a month later and married six months later after that. When you know, you know. In October of this year it will be 20 years for us.
Occasionally we will watch Ice Age and we did watch the sequels which were not as good as the first, when are they ever. But, now I have pieces of cardboard memories to tie in as well.
Before I close up today's post, I wanted to mention these cards fell 1:10 packs and here are the card backs, 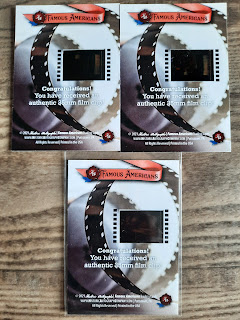 It doesn't give much details on the guarantee on these, but according to their website, these were culled from reels by Historic Autographs. So not sure if they are from original ones or not.
Thanks to Chris for the heads up on these and for the checklist.
*takes a sip before finishing up today's post*
I hope to track down a few more of these, especially from Austin Powers and Space Jam. Not that I wouldn't mind adding some Star Wars or an American Pie.
Thoughts on these relics, the movies I listed above and which ones you would chase is welcomed in comments!
Have a Fantastic Friday.
*Coffee Card Blogger Out*
Posted by Matt at 8:14 AM