The State Of The Hobby: 90's Parallels/Inserts

*takes a sip, feels a little angered from the newest faze from the hobby. takes an angry sip. gets ready for a new #CardsOverCoffee post to let out that frustration*
The influx of money hungry card chasers in the hobby have finally dug their way into the depths of my favorite part of collecting, the late 90's.
First they cleaned off retail shelves, then they drove up prices on retail and hobby products, and now they are driving insert and parallel prices up from the 90's including guys like Rodney Hampton, Charles Way and Kerry Collins that I collect.

Check out this sale on a Rodney Hampton Red PMG. When I acquired my version of this card it was $60, which I still thought it was steep. Yes, it's raw unlike this one, but still, it's Rodney Hampton. There is no reason for a card like this to be this high. 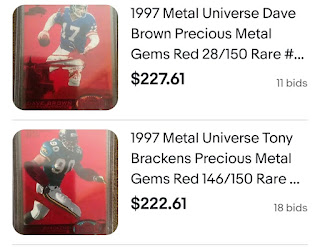 Check out these sales as well. Kerry Collins for over $300?? Dave Brown, yes, Dave Brown raw sold for over $200. You could have landed that card for probably $20 two years ago. Same with Tony Brackens.
It's not just PMG's that are going nuts either. There are other 90's parallels and inserts feeling the heat too. 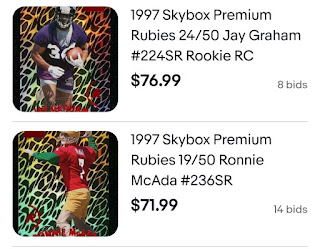 Let's take a look at a couple 1997 Skybox Premium Rubies. Can you imagine spending $76.99 on a Jay Graham card..EVER IN YOUR LIFE??? Or even $71.99 on a Ronnie McAda version. Who?? I know Graham at least but I actually had to Google who McAda was. Which he was Mr.Irrelevant in the 1997 NFL Draft and was drafted from the United States Military Academy. It appears he never had a snap in the NFL.
But, yet someone forked out $72 for him.
These are only a couple of examples for the craziness going on and the prices others are driving up on these cards.
Some of which I still need for my player collections. Speaking of which, I have a story to tell but first...
*takes an angry sip, you know, one of those loud slurps*
*takes another. returns to the keyboard to tell a story*
A guy on Instagram contacted me about a month ago after he noticed some of the players I collected and asked if I was interested in seeing some cards of those players he had.
I wished I had said no.
He had an amazing assortment of PMG's, Ex Credentials and a 1997 Skybox Rubies Rodney Hampton which besides the Green PMG, is my most wanted Hampton card. Immediately I inquired about a trade, which he was fine with doing but preferred to sell. So, I asked for trade value and this is the part that got me.
Overall, the cards he showed me had close to $1200 in trade value. These players included Kerry Collins, Charles Way, Tyrone Wheatley, Jessie Armstead, and Rodney Hampton by the way. I thought the number was steeper than Mount Everest so I tried just trading for the Skybox Rubies Hampton which alone was over $250 in trade value. Even though I really wanted those cards, especially the Hampton, thinking about the cards I would have had to give up to land those was overwhelming. I had to back out and cry in a corner with a cup of coffee.
Since then, I have seen a few of those cards list on eBay with a starting bid of $99. None of which ever received a bid. I am not sure if he still has those cards or not, but if I ever start to see the values dip I may check in with him again.
*takes a sip before finishing up today's post*
It's a sad hobby world when you collect the least popular players, and they have values of Hall Of Famers or more than them. Do you know how many vintage cards or Hall Of Fame autographs you can land for $1200? Yeah, exactly. Even though it was really hard for me to pass up, I made the right decision in the end.
I just wish that deep pockets would stay out of my woods of collecting.
Thoughts on today's post and if you would have done that trade deal is welcomed in comments.
Hope everyone has a fantastic Friday, the weekend is near!
*Coffee Card Blogger Out*
*one last angry sip*
Posted by Matt at 8:20 AM

Email ThisBlogThis!Share to TwitterShare to FacebookShare to Pinterest
Labels: 2022, Fleer, Metal Universe, Rodney Hampton, The State Of The Hobby