*sits down, then realizes left the most important thing on the counter. gets back up, grabs coffee and sits back down. a newer product in hand, coffee now ready and laptop being typed on. it's time for some cards over coffee*
For some reason or another, I get easily persuaded a lot of the time. When I see a card or cards I want, I do my best to try to acquire them whether they fit my collection or not.
I always turned down peer pressure in childhood from others wanting me to try a drink, but I see a piece of cardboard and I am all in.
Even though I don't watch WWE or really collect the cards, I kept seeing everyone post about the newest and hottest release, I fell for it. I NEEDED AND WANTED SOME.
*takes a sip, picks up pack off from the table and looks at it again and mind preps for today's break and post. sets it back down, takes another sip and continues on*
2022 Prizm WWE was so hot when it first released, it trended on Twitter for a few days. Trended! When was the last time anything in the hobby actually trended? 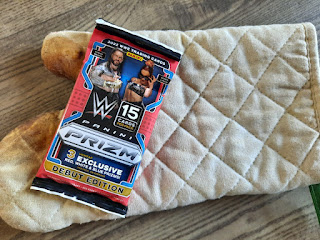 So when I found a hanger pack at Walmart, I questioned whether I should have used an oven mitt or not to grab the pack because of how hot it was.
I decided against it and took my chance with my bare hands. No burning, guess I got lucky. Of course, the product has cooled down some since the retail release started flooding the market.
But, now I had a pack to open anyways. I was apart of the cool kids club.
*takes a sip before showing the pack off* 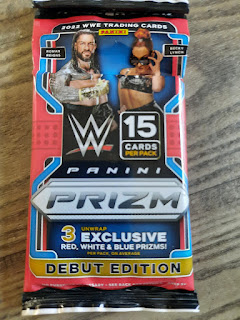 In every pack of 2022 Prizm WWE, there are 15 cards. Three of those cards will be Red, White and Blue parallels. Look for other parallels as well along with inserts and possibly long stretched autograph odds. Each pack is $16.
*takes a sip, begins to rip*
Even though I don't particularly collect wrestling, it doesn't mean there wasn't stuff in here I wasn't looking for. I always collect rookie cards and my wife being a Dwayne Johnson fan, I was hoping he would make an appearance as well. 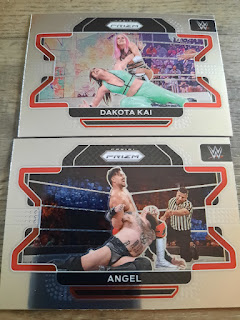 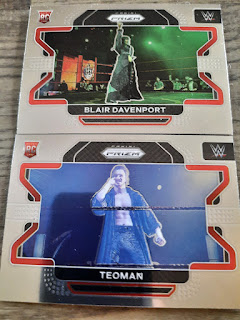 (a couple of rookies) 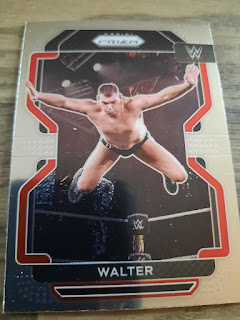 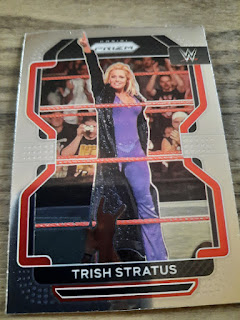 (finally, a name I know) 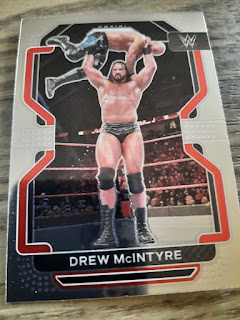 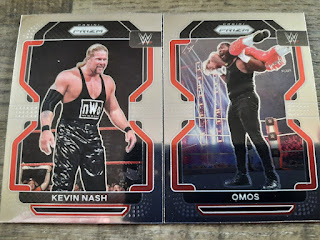 Got a couple of rookies so far. But, no Rock. 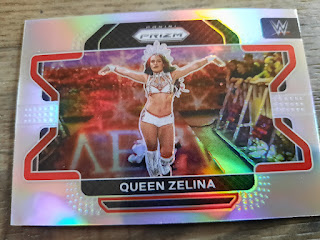 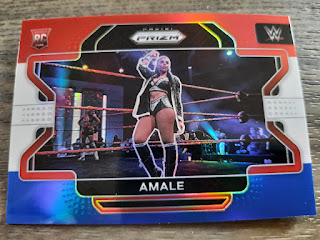 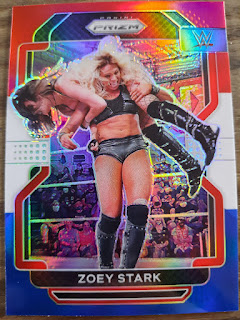 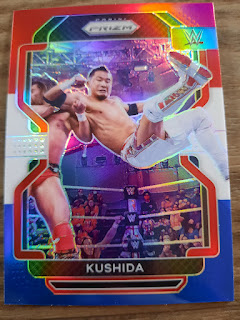 Final Red, White and Blue parallel card. I didn't know any of the wrestlers I pulled from this. 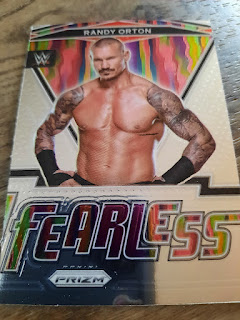 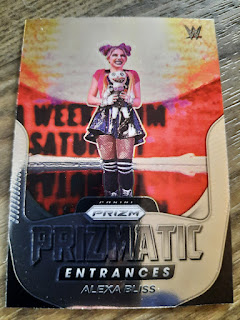 And a freaky entrance, well, Prizmatic Entrances of Alexa Bliss. Another name I knew.
Well, landed three rookies for my collection, but no Rock cards for the Mrs. I can see why though this would be a popular product among wrestling collectors especially since Prizm is my favorite Panini product for the other sports.
*takes a sip before finishing up today's post*
I will admit I did watch some wrestling back in the early 2000's but it wasn't something that ever truly caught on with me. I see a lot of die-hard fans on Twitter though and have some friends on Facebook that are as well.
The one thing I always wondered about wrestling, is whether you consider it more of a sport or more of an entertainment show? Let me know in comments your thoughts on this and the product above.
Have a thankful Thursday!
*Coffee Card Blogger Out*
Posted by Matt at 3:00 AM