*cup of joe ready to go, let's rip this pack*

My father has been very lucky in finding packs at Walmart in the past month while I see many other collectors coming up empty. From new products to even some old ones, his timing is almost perfect.

Almost of course. Even in my area there are those flippers.

In the past month, I have been trading him cards for packs since I haven't gone to Walmart in months and need the occasional rip and he has been more than happy to help me with that.

One of the newest releases I craved, like I do every year, is the first official NFL release in Score football. I like to get the first cards of not only my NY Giants, but of other teams as well and the new incoming rookies. Though I am not a big fan of the rookies still in College uniforms, I will take it for now. 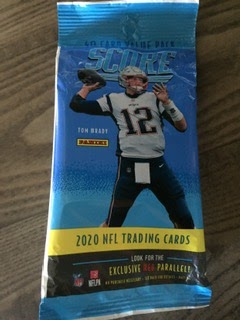 For Score this year or so far as I hope to think of it, I ended up with a Fat Pack. There are 40 cards in every fat pack and the pack is just under $6. The legend, I won't call him GOAT as that's Eli Manning of course, Tom Brady graces the pack cover this year.

And I believe Tom his own Tribute insert line in the product which doesn't make a lot of sense to me. Save that for when he retires and make one for Eli who has retired and has also earned one for this year. Come on Panini. 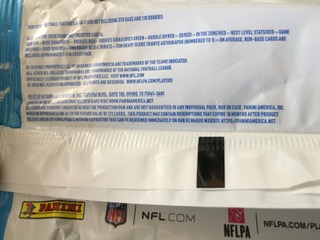 Here is the back of the pack with breakdown of what could be inside.

That feeling of the unknown within is just as thrilling as that first cup in the morning.

*a couple of sips before opening it*

Once I opened the pack, I am blessed with some great action photography right off the bat. The card, despite being a Giants fan, that caught my eye first was the Michael Gallup. Look at that angle of that photograph. 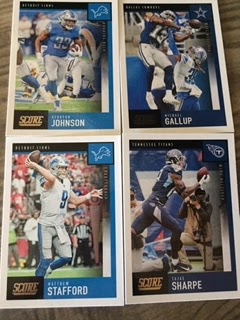 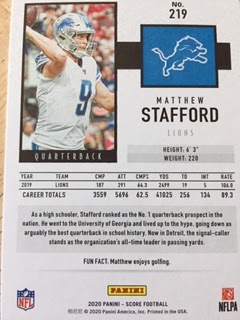 As for the card backs, yes I do look at the stats and read the write up, I iked what Panini did. I do wished there was more stats of the player however.

Though I do find this Fun Fact add to the back very interesting. I didn't know that I enjoyed, I mean, Matthew Stafford enjoys golfing. (if you don't get this joke, my name is Matthew) 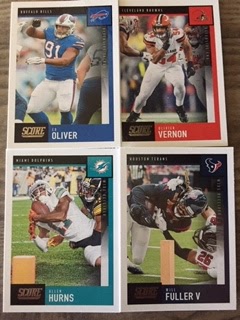 The next four cards show Allen Hurns and Will Fuller making dives into pylons while Ed Oliver celebrates a big play and Olivier Vernon pass rushing. I was curious how he would do with the Browns after the Giants traded him off like Odell, seems he took another step backwards according to his stats. Good move G-Men. 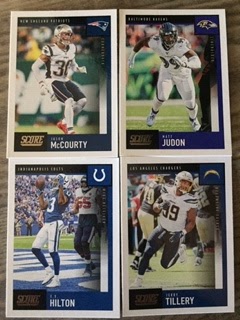 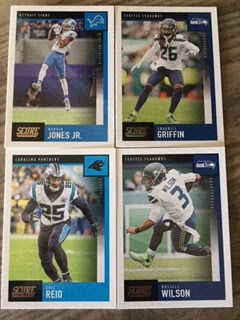 Another four base cards and Russell Wilson is making his swift moves. I don't think he gets enough recognition for the great QB he actually is. I doubt Seattle even wins half of their games without Russell. 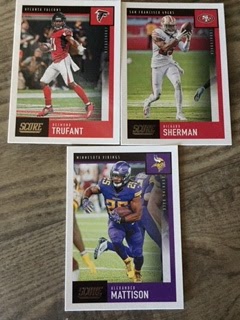 Final three veteran base cards including Richard Sherman who helped lead the 49ers to the Super Bowl.

Before I move on, I must mention the base set is a big one built up of 440 cards including 110 rookies which are always last in the pack. We will get to those soon I promise. 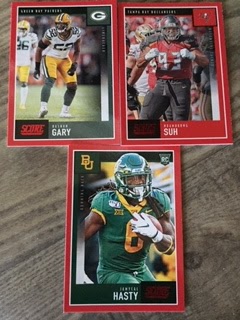 Up next in the pack was the three Red parallels that are exclusive to Fat Packs. Every retail level has it's own exclusive parallels. So if you're thinking about building a rainbow, well, you will have to dabble into each or I suppose you could just buy singles but where's the fun in that.

My three reds weren't terrible. Two great defenders in Gary and Suh and then a promising rookie that signed with the 49ers in Hasty. He could be one of those sneaky undrafted picks that turns out to be the next Terrell Davis.

*before diving into the inserts, takes a gulp of coffee, bite of bagel, wipes butter off hand so it doesn't ruin the cards and continues to go back to type*

The next 12 cards in the pack were inserts. So much for the 90's where you would have one or none. It's a guarantee now. 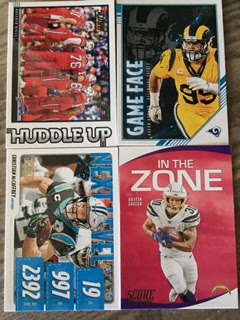 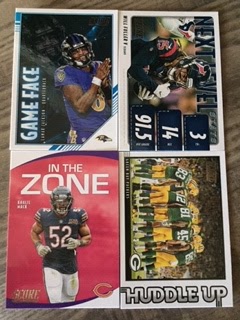 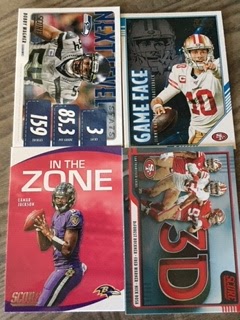 Score 2020 features a variety of inserts that stay the Score course and some exclusive just to retail.

Here is a breakdown of the offerings I found in my Fat Pack. I should also mention each insert has their own set of parallels,

3D offers the best defenders on a team and has 15 cards to collect
Game Face is exactly what it says, a players game face. This insert also has 15 cards to collect
Huddle Up really took a step back this year in terms of size, there is only 10 cards and not the usual every team offering. Which is really disappointing.
In The Zone is all of the best players in the game who are almost unstoppable. There are 25 cards in this set to collect and this one was my favorite design of the group
Next Level Stats has 25 cards in the set and shows the top stats for each player that are quite impressive.

The final six cards in the base set are always the rookies. From top rookies to the bottom of the crop, Score always offers it all especially with 110 of them to collect. 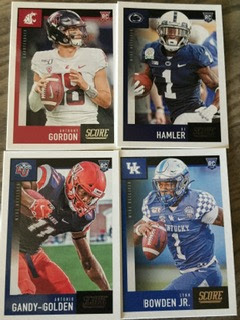 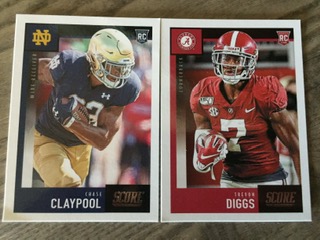 
*finishes up the cup of coffee, now onto cup two to finish this Coffee Break*

My thoughts are the usual when it comes to Score, it was a fun cheap rip and gives me my first NFL cards of 2020. I just hope I am able to get more, I need some of the top draft picks rookie cards and the Giants inserts since I have the base now that someone gave to me.

I also hope there is some football this fall. I NEED SOME FOOTBALL. You gotta give me that at least 2020.
Ratings (ratings based on 1-5 🍵)