*gets pumped up looking at the pictures taken for this post, should have played Eye Of The Tiger as well, takes a sip of coffee, then moves onto blogging*

Let me explain a little something about where I live, there are little to no collectors here. I could hit up yard sales with sport cards in the listing and buy them at any point in the day without worrying about them being sold before I got there. I could walk into Walmart a week after a release came out to buy whatever card brand I wanted to. Prizm basketball, my Walmart had tons of it when it hit retail shelves. I could/should have opened more than one of the hangers which is all I opened of it. I wasn't a least bit concerned about never having something to open occasionally when I made the 45 minute to hour long trip.

Then out of nowhere, you can't find anything here anymore.

I think I would be much more excited if I knew that it's because the hobby is coming back and is thriving in my area, but, that's not the case. The flippers have arrived folks. Cleaning off every single shelf of every kind of product.

I know this because my father goes to Walmart religiously every day and has seen them. He has also seen/heard about a few guys who will stalk down the distributor to grab stuff before it even hits the shelves at ALL local Walmart locations. He has even heard about people fighting over product from some workers at Walmart he knows. He even talked to the distributor once who said they had to switch times they were coming because they had people waiting for them. I haven't seen any of that first hand as I haven't been to Walmart much since Covid, but the few times I have gone the shelves have been dry to the bone with product and have been slowly overtaken with Jack Links products since demand is stronger than the supply. 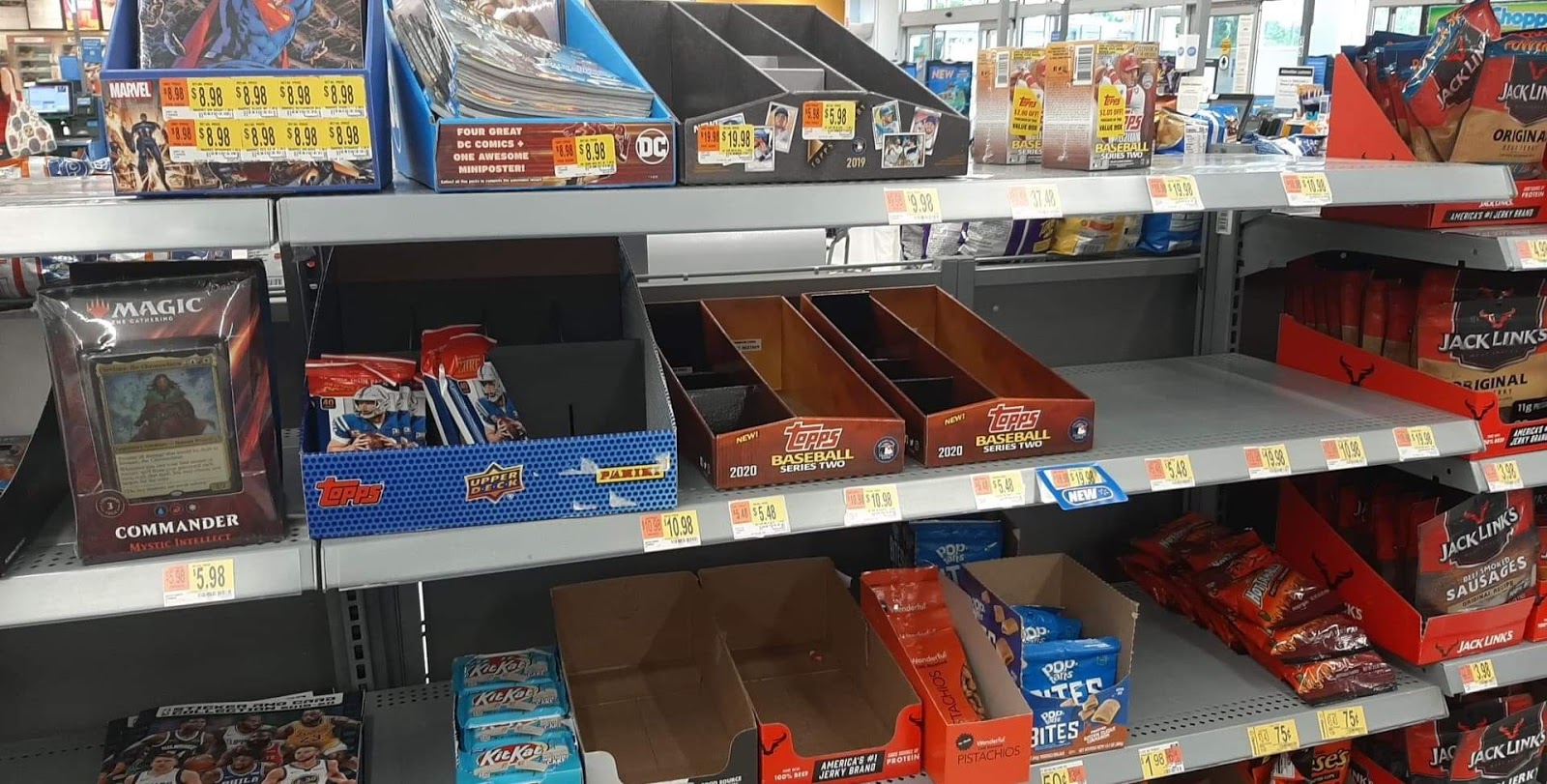 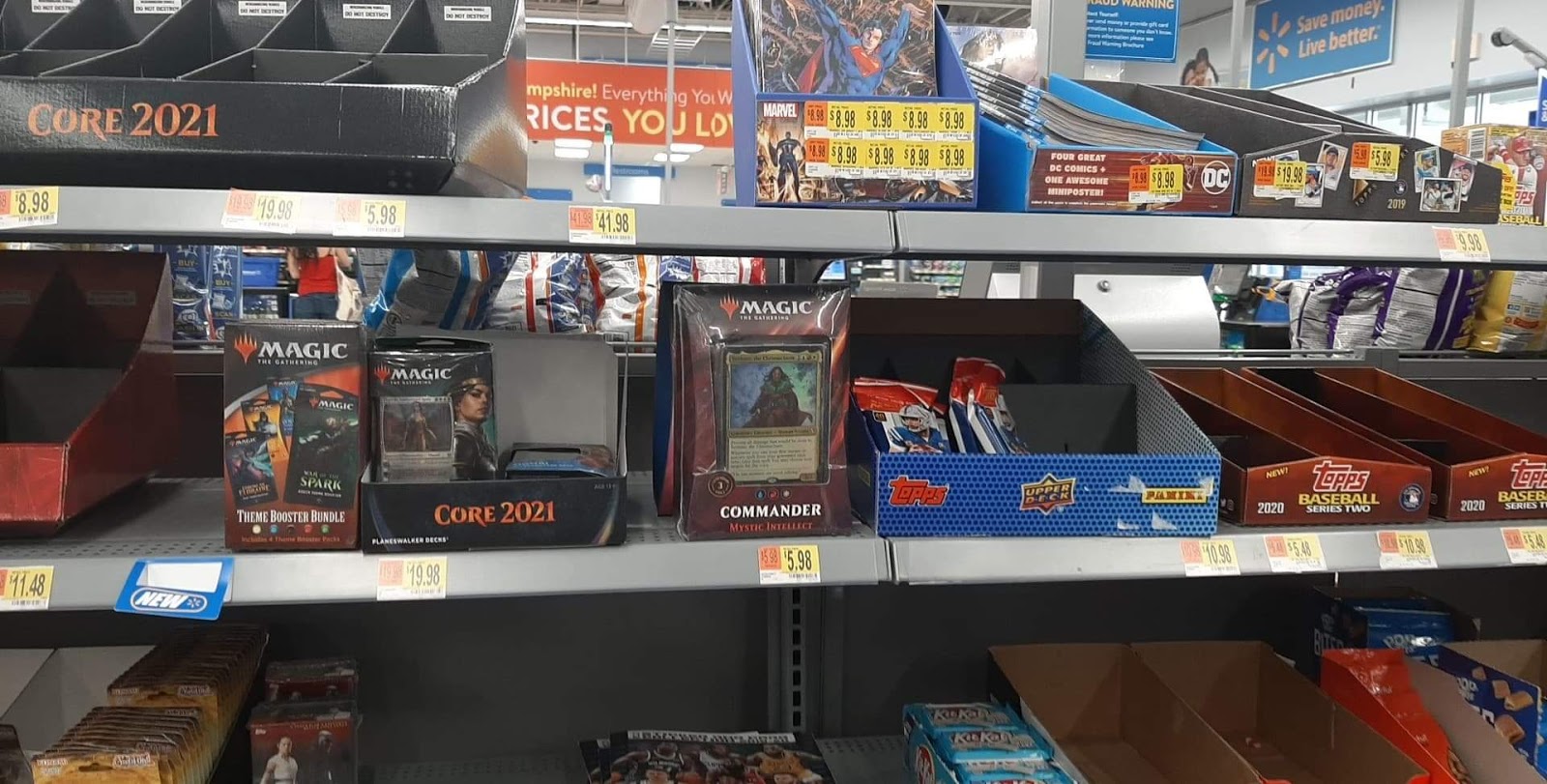 There is two blasters of 2020 Topps Series 2, two Panini basketball sticker books (no stickers) and four packs of 2019 Score football.

It's ridiculous. I know probably some of you reading this right now will probably exit this post because you are one of the guilty ones doing this, but, hear me out from a long time collector. I also know some of you are thinking it's about time someone said something.

Save some for the little people.

I know I have seen those posts across Twitter, save some for the kids, blah, blah, blah. And every flippers response would be "You would do the Same (as in buying out the shelves)." Or "It's my hard earned money, I will do what I want with it."

My response would be, "I would not do the same since my intention is to open only (its all about the thrill of pack ripping with me) and I could never afford to clean off a shelf." and then "Yes, it is you're hard earned money and you can do what you want with it, but there should be a line to draw with it. You wanna buy three blaster boxes, open one and flip two. Okay. I am fine with that. That means you left some hanger packs, hanger boxes and a few blasters for the rest of us. But, you wanna take a display of every new product the second it hits the shelves with only intention of making money, sorry, I am not a fan. Even the Grinch left behind some stuff when he was robbing the Whos. There has got to be some kind of Card Collector Rule Of Conduct that would back my case."

*takes a sip of coffee, feeling flip'd off*

Fortunately for me, my wife could see my frustration since it had been months since I had physically gone into the store (and the pictures I was taking of it) with the card section and she also spotted the $2 off coupon on the front of a Series 2 blaster box and told me I should grab one.

I wasn't going to turn that down. Who knows how much longer these last two blasters will be on there for. So I grabbed one and thankful that I did. Because it was a good one the flippers left behind. I look at it as a box that flip'd off the flippers.

*smiles like Stephen King behind his cup of coffee, then it morphs into an IT smile before continuing on* 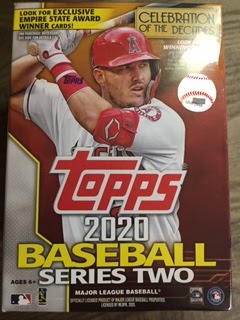 Look at Mike Trout's face, he knows the flippers were coming back to grab this box and the other one as well. He wanted to swing them away.

Let's take a look at how I did, 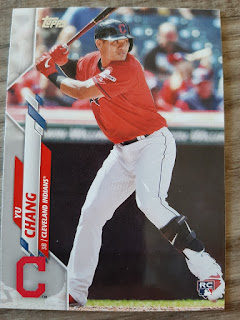 Normally I wouldn't feature a Yu Chang rookie card as a highlight, but when you pull the base and then 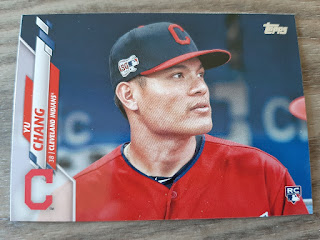 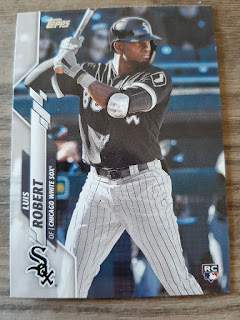 Normally I would have started off with this. BOOM. First pack into this box had it. I have no intention of selling or flipping it. I have been wanting one for my rookie collection and now I have it. I have also heard these are not easy to find though not being fully announced as an Sp. 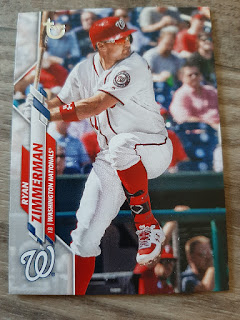 Oh look, another solid pull. Vintage /99 and a tough 1:283 odds of finding it. This blaster is rocking so far. 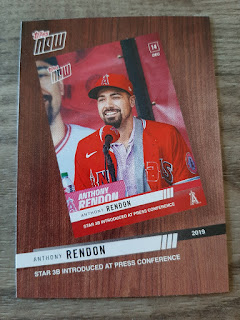 These inserts drive me nuts. I think these should be bonus filler cards and not considered an insert. 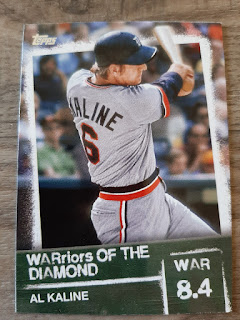 I didn't get one of these in my previous blaster (one I had to trade for). Kinda cool. 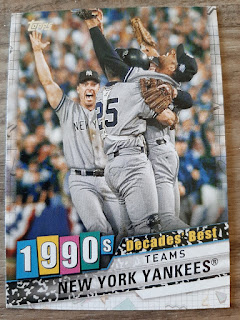 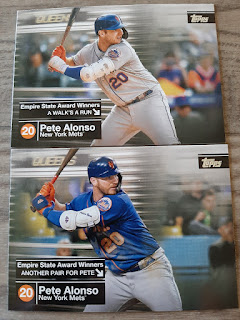 Pete Alonso inserts. I just stick them into my player PC. 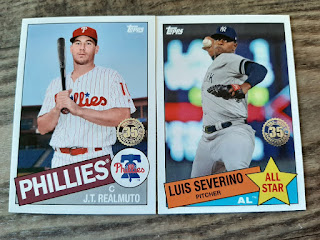 Another Yankees find with Severino. Pretty happy with all of the new Pinstripe finds. 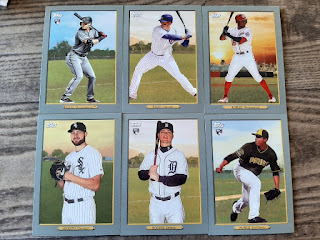 A few rookies among this group, great! (I do wish they would just bring back this as a product and not as an insert. Especially since the checklist is 100 cards deep which would be enough for a base set) 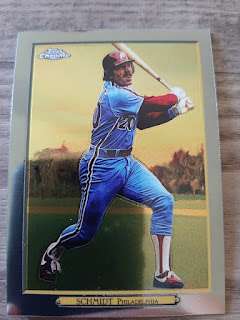 Mike Schmidt chrome. Can't go wrong with this one.

And now time for that one-per-blaster medallion. My first one was Bo Bichette and was numbered. 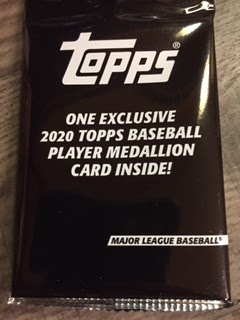 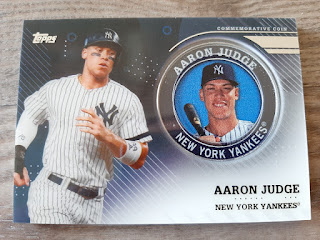 BOOM. Aaron Judge. Awesome PC piece. Now I just need the Gleyber to go along with it.

That was a lot of fun. I live for the thrill of the pack rip.

*feels really satisfied like I had eaten a Snickers*

I am not sure how retail outlets like Walmart can slow down people from taking an entire shelf of product, but I think it's time they do. They could put a limit on them, but who says flippers won't find other ways to clean off the shelf. I am sure they would. Retail outlets could ask for more product, but that just means flippers take more and not to mention, distributors only get what they get.

For now, I would guess things will continue to be this way. I just gotta hope that my father can time it right with some products so I am able to trade for them and be able to open something newer.

I waited a long time before writing a piece about my feelings on flippers because I know it's a sensitive subject as I know flippers do have their role in the hobby I am very passionate about. It's just that to me. A hobby. It's not a money grub, I don't sell cards at all. I think that's another piece on why flippers bother me some. I am all about buying something, collecting it, trading it, sorting it, etc. The hobby part. Not money. Money is the root of all evil as it's stated in the Bible, "1 Timothy 6:10 has it as: For the love of money is the root of all of evil: which while some coveted after, they have erred from the faith, and pierced themselves through with many sorrows."

Greed is never a good thing and it's hard to see it happening to my hobby and every day I see it causing strife between collectors which is never a good look for it or any newbies/kids wanting in. Just remember that.
It probably also doesn't help when there are influencers out there saying that cards are an investment.  Just remember those Jose Canseco rookies you are still holding onto for your retirement. It's a hobby guys and gals.

Invest wisely.
*final sip of coffee before deciding on breakfast*

Before I close, hot tip, if you do live near me and are checking out the card section, cards aren't hot anymore. That's why there are none. However, Jack Links products, oh yeah, those are where it's at. You should go grab a few or shelf full of that stuff before it's too late :)
Posted by Matt at 8:11 AM