So Glad I Didn't Pay This Part 2

*Coffee aroma fills the house on yet another cold morning. But, something about that scent just lifts you up and carries you out the bedroom door into the kitchen. It sets me down next to the computer to do another new post of Cards Over Coffee*
Yesterday, I showed you the results of a "$60" Hanger Box and today I will dig into a much more expensive Blaster Box.
But, first...I want to show you something I did pay a lot extra to get. 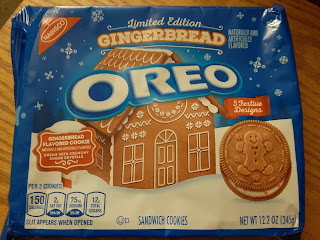 Every year my wife knows I look for holiday flavored Oreos and Facebook must have known as well as ads for the Limited Edition Gingerbread Oreos circulated across my face for a week. The only problem was finding them.
Well, my wife did find them finally on Amazon. The asking price shipped for them was $13. You read that right, THIRRRRRR-----TEEEEEENNN----BUCCCCKKSSS.
Can you put a price on love or Oreos though? No. At least not this time. So she went and pulled the trigger and told me to not waste any regardless if I like them or not. I obliged knowing I didn't think I would have a problem with it.
A week later, they were coming from the West Coast, the cookies arrived and they were marvelous. Every bite was like eating a cookie of gold. It must be how Bill Gates feels when he eats cookies and this is as close as I will be eating like the rich.
*takes a bite of cookie, thinks about making Windows 2020. Decides not to, could contain a virus*
Now it's time to break this blaster box of Prizm and see how we do.
*takes a sip, begins to rip* 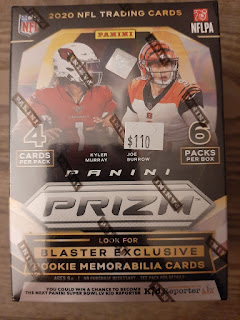 (once again, take note of the price of this blaster box....$110)
2020 Prizm Football Blaster boxes come with 6 packs of 4 cards each.
This blaster should come with the following,
Blaster boxes normally are $20 but as you saw above this one would have been $110. With only a few more cards in a blaster than a hanger, 4 to be exact, this makes this an even tougher bargain with each card having to be valued around $5.
*opens up packs, pulls out the best of the group to show off* 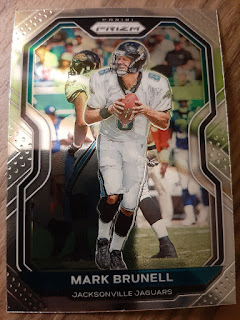 Mark Brunell was my best base card of the group. He also is a player I collect so I won't complain.
Only found three rookie cards in this box and none of which are top notch. 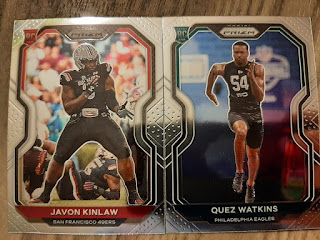 Kinlaw (defense ugh) and Quez Watkins who I am not even sure has played at all this year. 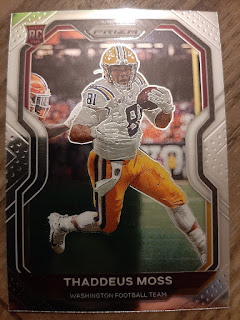 And Thaddeus Moss was the other. Once again, not a household name so not sure if he has hit the field at all either.
Now onto my insert pull.
I also found one insert in my break, 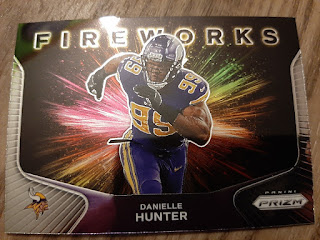 Not great. It's funny not to see an insert in every pack anymore. I kinda like it but then don't. I am hard to please I guess.
*takes another sip of coffee before moving onto the next part of my break*
Let's hope the parallels or the relic card stand out. 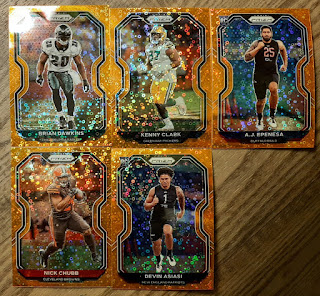 Here is my five Disco Parallels. I really like the look of them but a TE and OL for my rookie parallels, ugh. Some decent veterans however. 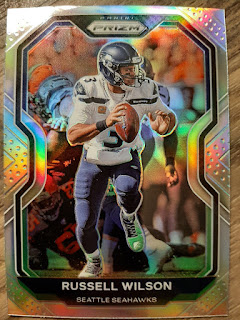 And my silver parallel was of Russell Wilson. I love me some Russ so this will be kept in the collection and may be the card of the break so far.
Now onto my relic pull....
Boom!! Oh wait...........................................there wasn't one.
*takes a sad sip of coffee hoping that the taste will re-awaken the mood after this tough break, it does. To a certain extent*
No relic, no big name rookies, and not much else to brag about. The Wilson is beautiful and by far the highlight of this box break. Once again, I am glad that I didn't have to pay for this.
In closing, overspending on the Oreos was a great decision in comparison to this Prizm. It doesn't take a genius like Bill Gates to see that.
Will I fall for more Prizm, it's likely despite these two breaks. But, what price will I be willing to pay  or not pay for more, well, we will see.
Posted by Matt at 5:00 AM