*(batman voice) pours cup, turns on laptop, sits down and checks updates on the Joker. Doesn't see any, I guess it's time for Cards Over Coffee*
I have been a Batman fan since my youth. It started with watching the 1989 Batman movie, to being heavily into Batman The Animated Series, to watching the 1966 series with my grandmother to collecting cards from and seeing Batman Returns and Batman Forever, to renting Batman and Robin on VHS, to going to the movie theaters with my Mother-In-Law to watch the Dark Knight series. If that last part doesn't tell how much I like Batman, then nothing will.
Despite my fandom, I don't have a lot of Batman cardboard. The small amount of cards I had in my youth from Batman Forever and Batman Returns are gone. So I am basically starting from scratch with any additions I get now.
Earlier this year, Oren got me going on my Batman chase again and recently I added two more items to my collection.
*takes a sip before getting ready for a battle with The Riddler*
In 2013 Topps put together a 75th anniversary set that featured more than 100 different entertainment sets. 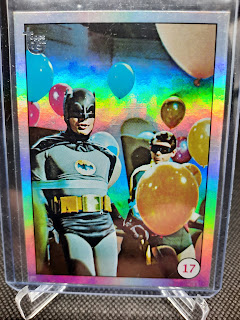 One of those featured The Dark Knight himself. This one isn't the base, still missing that one, but is the very sharp Rainbow Foil.
Then I found some unopened packs of 1995 Fleer Ultra Batman Forever, 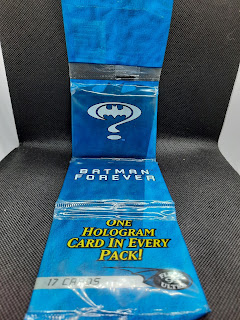 So I grabbed one. Not sure if I will open it yet or not as it may mean more to me unopened.
*takes a sip before finishing up today's post...and before I take on The Penguin!*
There is a lot of Batman sets I want to collect from the '89 Batman to Batman Returns to Batman Forever to the Dark Knight series. I do have an unopened box of Batman The Animated Series I got from my wife's uncle, but I don't plan on opening that up.
As always, I am interested in trading for needs.
By the way before I finish up today's post, I wanted to let everyone know my favorite Batman villain which is Clayface. After that, Joker comes in next (best played by Nicholson and Ledger).
And when it comes to my favorite Batman, Keaton, Kilmer and Bale played him best with Keaton holding a slight lead at the top.
In comments, let me know if you like Batman, your favorite villain, your favorite actor who portrayed Batman.
*Coffee Card Blogger Out*
*Coffee Card Blogger Out...until Catwoman just arrived...meoooowww*
Posted by Matt at 8:11 AM