*takes a sip of coffee, gets ready to dive in on some topics of 2020 and go offbeat from cards for a little bit*

*another sip before the dive it*

2020 has been a really bad cup of coffee, my internet has been awful with so many using it do to Covid-19, oh yeah, we have Covid-19, riots and acts of violence spreading like wildfires, we had actual wildfires, killer bees, plane crashes, death tolls and so on and so forth.

But to me, one thing is clear, it's one simple person/act that has spread all of these issues. Have we ever wondered what it would be like to have the opposite of that? What happens if one person was to give to someone, say a kind word to someone and then that person feeling good about themselves passes that along to somebody else who is feeling good about themselves and then passes that along to two people and then that continues to move on. Imagine that, a world of positivity.

I was raised to have good manners mostly by my grandmother. I say please and thank you. I hold the door for anyone behind me. I compliment someone when the moment strikes. I push the shopping cart back to the store. I say good morning to anyone I pass. If I see someone on Twitter who needs a encouraging word or message of hope, I let them know that someone is there for them. I like to make people laugh, hopefully at my jokes and quick wit and not myself, but either way it helps to make someone smile. My wife and I have even bought lunch a few times for an unsuspecting group of people. It doesn't take any effort and comes out naturally and I feel good about it. It would be amazing to see others be like this as well especially during these times where we all could use some lifting up.

I am not saying be like me, but even a small bit of effort, can change the world.

*takes another sip of coffee, steps off the soap box and moves onto some cardboard*

During these times, I have found some comfort in being nostalgic in the hobby. I think others have as well with players like Michael Jordan, Sammy Sosa, Mark McGwire, Ken Griffey Jr, Dan Marino and products like Spx, Topps Chrome and Fleer Metal being put back in the spotlight again.

Some of the hype I fell for, but not all. Some I didn't need to as I already had the hype in me and some of the cards especially Fleer Metal. That was one of my favorites especially when it turned to Metal Universe later in the 90's.

It had some wacky, but incredible background designs especially for 1997 and 1998 with volcanoes, city highlights, etc. The 1999 version I didn't remember much about as it was around the time where girls became more important than cards. 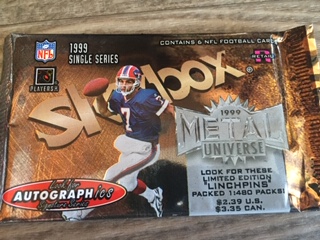 It got me wanting to open some, as along as the prices weren't insane like the other releases of it, and I found packs for less than the advertised price on the package.

So I grabbed four packs. Three to rip, one to keep. It's been a tradition in the last year when I bought nostalgic cards that I keep at least one sealed. Sort of like a time capsule later on in life when I may not be able to find some of these.

It's time to give these a rip.

There are 6 cards per retail pack and I paid $2.25 per pack. There are chances at plenty of great inserts including PMG cards which I was really hoping for. Precious Metal Gem cards of the 90's were some of the best/rare parallels. Never once did I pull one despite plenty of my metal pack ripping. Guess you could say I was a metal head.

Will today be the day I find a PMG? Its time to see (unintended Dr.Seuss rhyme) 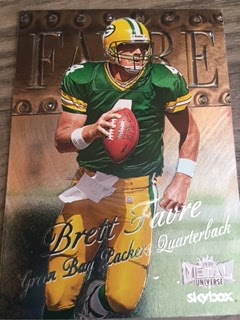 Not a bad start to find Brett Favre as the first card. The card is covered in metal foil with a steelworks kinda headline with the players last name embossed. 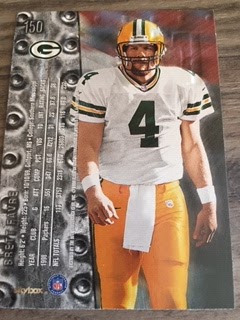 Back of the card, you can see the embossing behind the players head. It's an okay design, but definitely not as good as 1997 and 1998. I think it actually would have looked better without the last name header. 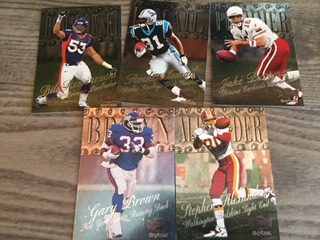 Rest of pack one landed me a PC card with Gary Brown and a player PC card in Jake Plummer. 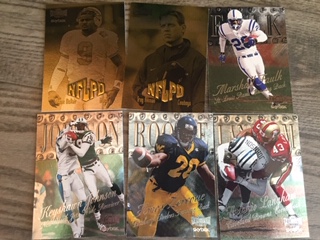 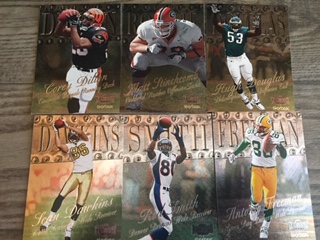 Not a lot of big hits, but didn't matter. Nostalgia rules! It left me wanting more and wanting to open up that final pack. Which, I didn't. Maybe instead I will find a couple more later on to open online. Seller had a ton.

So today, I ask you to take a minute out and say hi to someone, hold a door, show a smile, ask how someone is doing, buy that coffee (I know your in line somewhere to get one) for the person in front or back of you, and even return that shopping cart. The walk isn't that far, I promise. It will make you feel good and the person you are doing it to as well.

And who knows, that could start the next up-rise.
Posted by Matt at 7:46 AM