I Can't Explain It

*it's Monday afternoon, 81 degrees and I am by the lake. Despite it being late in the day and a tad warm, it's never too late for some cards over coffee*
UFO's, Bigfoot, The Bermuda Triangle, cheese being stuffed into pizza crust, flippers trying to move Score football are just some of the things that can't be explained in the world.
I would also add my collecting to that list as well as there are some things that I can't explain about it.
You see, sometimes I will make a trade for cards and can't explain why I traded for those particular ones. I just do it. Then I wonder sometimes if it's not my collecting and maybe it's just me. Maybe I can't be explained like Bigfoot.
*takes a sip realizing that my hair loss over the years probably proves I am not Bigfoot*
Take today's cards for example. I don't watch tennis. I don't play tennis. I don't even collect tennis but something told me I just needed to trade for these so I did.
*takes a sip before moving on*
I acquired these cards awhile back so my memory is blank on who I acquired them from, but thank you if you are reading this.
Even though Tennis isn't my thing at all, it doesn't mean I don't know some of the tennis players. Big names like Roger Federer, Rafael Nadal, and Serena Williams are ones that even the non tennis fans know or have at least seen or heard in newspapers, the news or SportsCenter.
That's probably the same for, 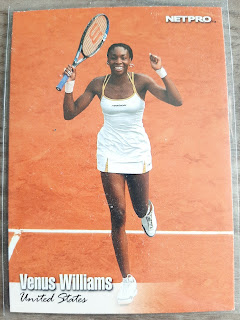 Venus Williams who is known for being one of the all-time greats in women's tennis alongside her sister Serena. 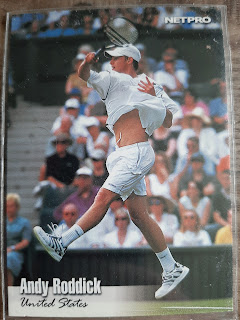 Andy Roddick who won the 2003 US Open and remained at the top for a few years despite only winning that one time. 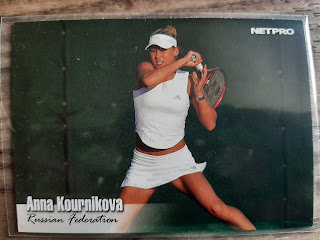 And of course who could forget about Anna Kournikova. The stunning Kournikova won championships and tournaments at an early age of 14 and made a name in pros for herself especially in doubles matchups. She was also known for dating Enrique Iglesias.
*takes a sip, gulp actually before moving on*
Just a little information on this set, the 2003 NetPro cards had 100 cards in the base set made up of big rookies including Serena and the cards above. Well, the Andy Roddick is actually an Sp and not the rookie, but still is his rookie year card.
*takes a sip before finishing up today's post and begins to contemplate a coffee snack companion*
Don't get me wrong, I think the additions are fun and all, I just still can't explain why I added them. If only Unsolved Mysteries was still around. I can picture Robert Stack walking from behind a dark alley corner..."tonight on Unsolved Mysteries.. we try to solve why a guy continues to acquire cards that do not quite fit his collection....and why he continues to drink coffee next to his cards and laptop..."
Now that would be a worthwhile watch.
I am sure these additions will not be the last ones I acquire and can't explain why I did.
*takes another sip*
Do you add cards and not know why? Tell me some examples in comments.
*Coffee Card Blogger Out*
Posted by Matt at 6:17 PM