*takes a sip feeling nostalgic today as the memories are floating back to when I first met my wife and some of the movies and TV shows we used to watch. I am not sure why my mind is floating back then but it may have to do with today's card and coffee mate. See what I did there? takes another sip, it's time for some Cards Over Coffee*
When it comes to comedy sketch shows, I am sure many of your minds jump to SNL. To me, SNL is okay. I preferred one which I called a hidden gem in MADtv
Not only were there some hilarious sketches, but some of the characters they brought to the show made you never forget them. Characters like Ms.Swan, Stuart, Kenny Rogers (well played by Will Sasso), Cabana Chat and some great impressions by today's Coffee With actor, Aries Spears.
*takes a sip before moving on*
Aries Spears has been in both film (he was in Jerry Maguire and Malcolm X to name a couple) and TV, but to me will be best known for his role on MADtv. He has some great impressions including two of my favorites of his in Jay-Z and Eddie Murphy.
Spears appeared in Upper Deck's Goodwin Champions product in 2019 which is known to find autographs/relics of people you don't get everyday. 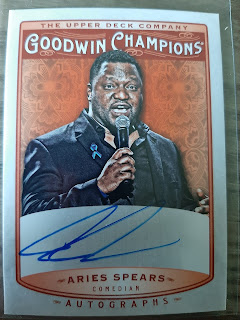 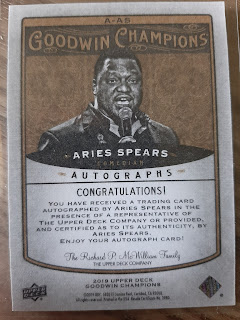 I recently snagged this autograph for $4 on eBay with a leftover gift card. As always, my celebrity autographs always represent a part of my past and memories. Spears also has base, parallels and a relic card as well. Maybe something to look at down the road.
*takes a sip before finishing up today's post*
Aries played on MADtv between 1997-2005 and currently does some voices in cartoons, guest appearances on shows and still continues his roots of comedy stand-up.
I think if I was to go back in time, I would have tried some stand up myself. I love comedy and especially making others laugh. The saying goes "laughter is the best medicine" and I believe in that. I did all I could to make people laugh last year as I know we were all going through a tough time. The laughter of others also helps yourself feel better too.
*takes a sip, Coffee Card Blogger Out*
Posted by Matt at 7:59 AM