*the skies are darkening as the rain approaches on vacation. Instead of sitting outside by the lake, I am in with a cup of coffee and my laptop*
I haven't sent out a TTM autograph in a little while, but after seeing a few scores in the Autograph Facebook Group I am in, I was thinking it was about time I sent one.
One of the returns by those in the group caught my attention. That one was from an actress I saw a lot of in the 90's.
That actress, Fran Drescher.
*takes a sip, continues on*
Fran Drescher starred in a few shows and other TV series guest appearances, but was best known by me and many in her role of Fran Fine on the series, The Nanny, which ran from 1993-1999.
I sent Fran an index card to sign and she was more than generous on her return. 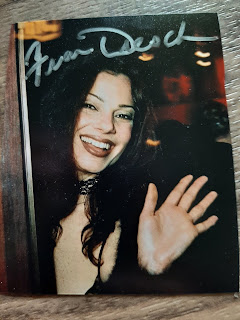 She sent me a signed pocket photo 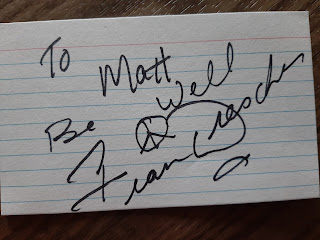 Along with the index card I sent signed to me. Nothing better than getting an autograph back written to you. For some reason, it feels more legit.
Thanks Fran for the return and for taking time out for a fan.
*takes a sip, finishes up today's post*
Drescher was diagnosed with uterine cancer in 2000 and underwent a radical hysterectomy. No further treatment was needed as she had a clear bill of health. But because of that, she started the Cancer Schmancer movement, a non-profit organization dedicated to ensuring that all women's cancers be diagnosed while in Stage 1, which is the most curable stage.
She is always looking for donations, if you are up to doing so or just want to read her website about her movement, check it out HERE.
I think cancer awareness is so important and I always appreciate others when they do all they can to get the word out. I will always share anything to do my part to help.
*Coffee Card Blogger Out*
Posted by Matt at 3:27 PM