*looks at grabbing a glass of OJ for a second, nah, just teasing, it's always coffee. Looks forward to today's Coffee Break*

It was the day after yesterday's post, in real time of course, and I get a text from my father informing me that Topps Chrome has arrived to Walmart as it appeared the distributor had come and put up some product.

If you haven't read my blogs before in the past or don't remember, I am a huge chromie. It's sort of like being a groupie, but for Topps Chrome. I have bought some form of Topps Chrome since 1996, it's inaugural year, and haven't missed a year yet of ripping some form of it. Back when Topps had multiple sports, I would even dive into each sport as well. Football chrome was my favorite.

The problem with just dropping everything I was doing to make a quick trip was the fact I had just gone the day before and that it's also 45 minute to 1 hour drive away. I knew I could have had my father grab me some, which he did grab me a blaster before heading to his work I will need to trade for later on, but I wanted some now. I was acting like the girl in Willy Wonka who wanted her father to buy her everything..NOW.

So I began tearing apart the house to give me a reason to go back to Walmart (other than Chrome) to propose the idea to my wife and found a few other reasons to go- admit it, you have done this before, I know you have- and found that we were in need of a few cleaning supplies. Those supplies of course could have been picked up locally at Dollar General, but they didn't have Chrome obviously.

But, we took the trip again which felt like an eternity to get there. Though I really hate going into stores since Covid as I feel like I have to enter them like the CDA on Monsters Incorporated. 23-19!!! 23-19!!! This is only my third trip to Walmart since all of that started as I refuse to really go anywhere unless I have to and that includes the post office. Which is why my trades are way down this year.

My one worry on the very long drive over as I had dancing chrome cards above my head was those darn flippers beating me to it first and taking a long trip for nothing. Well, cleaning supplies. (insert winky face)

As soon as I arrived, I busted out of the car door making the mad dash towards the entrance and the card section. It was the scene from Jingle All The Way as Chrome was Turbo Man.

When I finally got to the section, I couldn't find any at first. Once again that sunken heart of disappointment came in, then I spied one single hanger box sitting on the top shelf. I snagged that faster than the one Boston Cream doughnut in a Dunkin' Dozen box. I felt like a kid at Christmas.

So we finished up our shopping and I walked out of there feeling like a boss carrying around my proudly found box of Chrome. Which by the way, I didn't expect to have to pay $15 for. When did prices go up?

I made it to the car, sanitized my whole body like it was essentials oils, then began to rip.

*takes a happy sip of coffee, then moves onto telling the results* 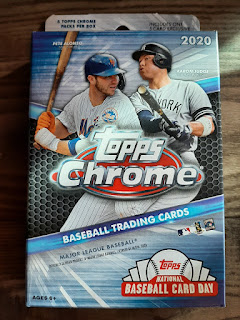 Every 2020 Topps Chrome Hanger box has five packs of 4 cards. Topps Chrome always has stayed with tradition of four cards per pack. Each hanger promises a 5 card preview pack of Gallery which I assume is a Walmart version. Appears there is one with a five card Topps Update preview as well. As I said above, the hangers are $15.98 now. Insane. 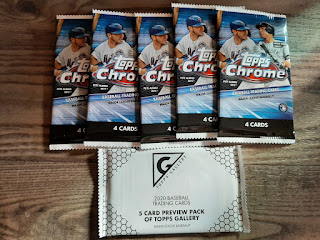 Here are the pack offerings, wish me luck! (yes occasionally I will carry my backdrop for cards around. I don't have an obsession...)

The highlights from the break are the following, 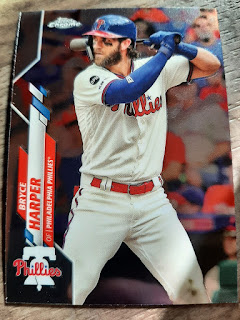 The first pack yielded a Bryce Harper base. There is something about the smell of chrome that just makes you happy. Just like the smell of coffee. 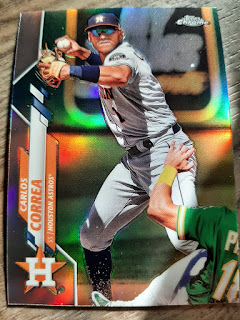 Chrome refractor of Carlos Correa. It was back to back with his base. 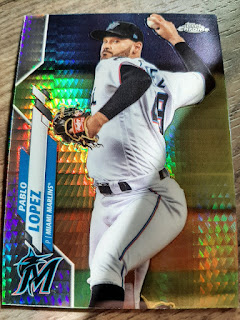 Prism refractor of Pablo Lopez. Marlins or not, I live for the shine. 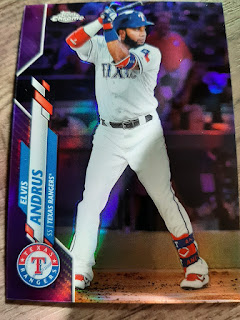 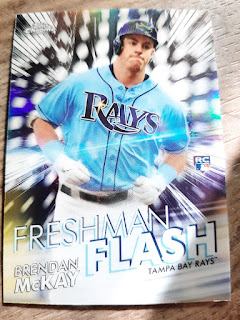 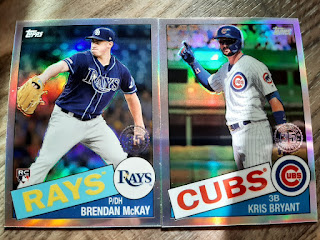 You know what, I can't stand this insert line in the base Topps, but when you add chrome and refractor shine to them, that's where it's at. Beautiful cards and another McKay.

Before I move onto the Preview Pack, I am sure you are wondering where are any pictures of rookies from my break. Well, I didn't get a single one. NOT ONE. Which says a lot for the product as I am sure rookies will be tough to find which will only drive the product even more.

*takes another sip, moves onto the preview pack* 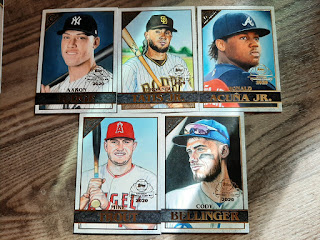 I really liked Gallery in the 90's, but this newer versions of it I haven't been as much of a fan. It also seems to be the one and only product that sits on shelves for awhile too. My Preview Pack though was fire with talent and gave me a couple new PC cards for my Judge and Trout PC's.

Well that does it. Nothing too spectacular, but I enjoyed the rip regardless. Topps Chrome will continue to remain one of my favorite all time product lines and I feel blessed to had been able to open one of this years looking at many collectors posts and tweets claiming their stores are cleaned out.

*breakfast time. takes a sip of coffee, glances over post one more time before hitting publish*
Posted by Matt at 7:42 AM