*Coffee is ready to go and so am I*

Every cup of coffee has an MVP and every person chooses their own MVP for it.

For years my MVP was milk and sugar. LOTS OF SUGAR to go in my coffee. Which is what made it stand out. But, as I have gotten older, my tastes have really changed and I have switched to a new MVP for the past 20 years. 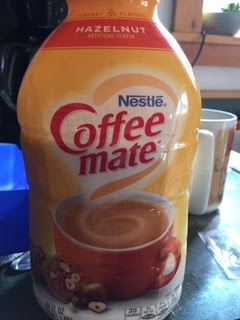 That MVP is Nestle Coffeemate and specifically the Hazelnut flavor. A cup of coffee to me isn't the same without this MVP combo. At least at home. If I am out at a restaurant, I am fine using cream and sugar as restaurant coffee always tastes better. Don't ask me why. And it's not like my coffee doesn't taste good, it just needs it's MVP to carry it home.

These Coffemates come in a variety of flavors and I have pretty much given all of them a go. Some were okay, some are good for holiday time (I will post about those when it's time to) and some sounded good but were downright disgusting. I won't even mention how bad the non Nestle Coffeemate brand creamers taste especially the knockoffs.

So I will stick with my one MVP that works. Just like a lot of teams in leagues do. They all know that one player that helps carry that team and who to keep an eye on. That's what this creamer does.

*takes a long sip, mmmmm. Coffee. Hits the heart and soul. Sets mug down to continue his blogging*

Upper Deck MVP Holograms was a 36 card set featuring Upper Deck's selection of an MVP on each of the NBA's 27 teams. Cards 1-27 in the set showcase those and the final nine, cards 28-36, are Future MVPs that  focus on player's who could become their team's MVP in the near future.

There were just 138,000 individually numbered sets produced. Can you imagine if these were made today and looking at the back of your card to see 1/138,000. Would be pretty insane for these times but being made back then makes them feel sort of a short print when you think about it.

These sets were available only through hobby dealers and select retail outlets. Or as of now, you can look for these sets on eBay and Amazon. 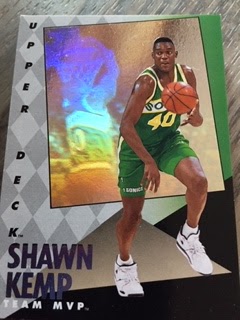 The front of the card features a checkerboard background with hologram and full colored player in the forefront. 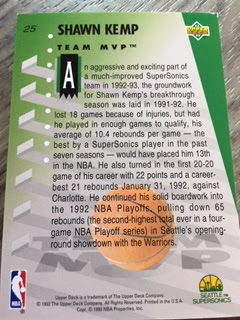 The backs featured team colors and a write up about the player. There is also a watermarked Team MVP and basketball behind the write up.

The Diamond King sent along a few of the cards from the set so I am not sure if he had a full one or just a select few but I appreciate the ones I got. Don't think I have ever seen or owned any until now.

As for a set chase, I don't think it there will be one, but I am a huge hologram dork, so who knows.

Here are the others he passed along, 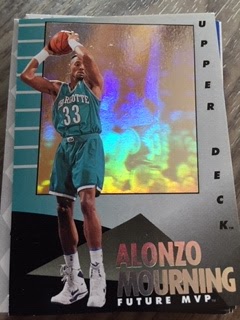 Alonzo Mourning. Upper Deck wasn't too far off with Future MVP for Zo. Except I don't think he really made his impact until he was with the Heat. I really don't remember him much as a Hornet. 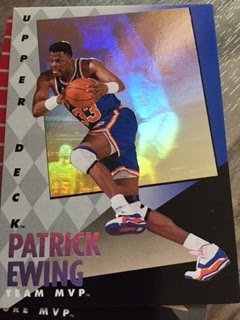 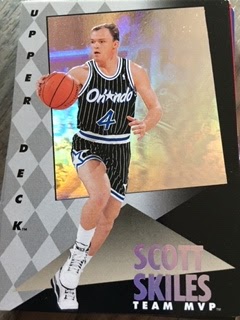 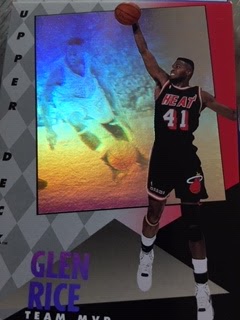 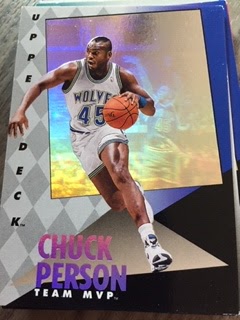 This set also includes the one and only MJ. I mean how can it not? That one should be labeled League MVP though.

*takes a sip, wonders why they never made a coffee mug with holograms of coffee mugs on it since holograms were such the rave in 80s and 90s. New marketing idea? Hmm...*

Upper Deck made some great hologram cards back in the 90's, but I don't think they really upped the ante on that technology until 1994 when you could rotate the cards and see a 3D look especially with players faces.

For me personally though, hologram cards will always mean the late Spx releases. Those were the MVP's of holograms.

*takes a few more sips of coffee, before closing out today's post*

I explained above how I use the Coffeemate to go in my coffee, but I should also mention that I don't drown my coffee with the Coffeemate. I put in just enough to give it that superb flavor without taking away from the true coffee taste. If I didn't want coffee, I would just drink the creamer. That's pretty much how my wife makes hers with the Coffeemate, I took a sip of hers once and it was overpowering and left me on a sugar high.

Not me though, I want to experience the coffee though without the MVP, it's not a team.
Posted by Matt at 7:28 AM