First Basketball Rip In A Year

*temperatures are up in the teens today, or what we locals call a warm day. Coffee is ready and so am I for another Cards Over Coffee*
As we all know, we are in tough times when it comes to trying to find retail products. Those cards sell off from shelves faster then Roadrunner getting away from Coyote. And for those of you who are offended by Looney Tunes, just look away at that previous sentence.
No retail cards sell faster than basketball.
My Walmart before the pandemic couldn't sell a single basketball product, but because of the big surge I haven't seen a single pack since December of 2019 when my wife grabbed me a hanger box of 2019-2020 Prizm. If I had only known, I would have had her grab a lot more.
Basketball isn't one of my top collecting sports, it falls third behind football and baseball, but I still like to make some additions to that part of my collection occasionally so it's nice to be able to find some to open.
*takes another sip, feels his tummy is rumbling for some honey. Well, I don't have the Winnie The Pooh honey addiction but maybe something with honey in it would be in order this morning*
I know my buddy @ChasinTheGraph feels the same way. He was sick of not finding retail so we both were on the same page with that and the direction the hobby was heading. We had quite a few conversations and a few trades as well. One day he had mentioned buying a couple 2020-2021 Prizm Draft Picks basketball hanger packs off from a friend of his so I inquired about trading for one of those. He was more than happy to obliged and we easily pulled off a quick trade.
Just a couple days later, the pack arrived.
*takes a sip, begins to rip* 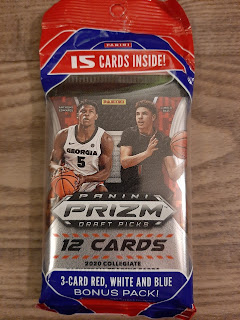 Each hanger pack of 2020-2021 Pirzm Draft Picks comes with 15 cards total with three of those cards being represented by Red, White and Blue parallels. 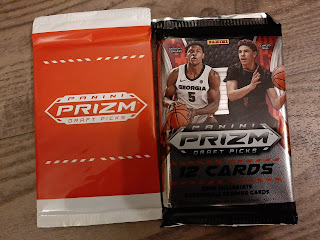 You bust open the packs and reveal three regular packs and one of the special packs with parallels which I always set aside and save for last.
I will be honest, other than Ball, I don't know any of the players in this years draft as opposed to last years draft with names like Williamson, Herro, Barrett and Morant. I have no idea how I did overall but glad to have at least some rookie cards of these guys. 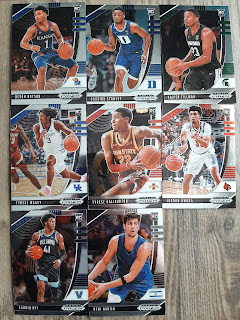 Some base. I don't mind adding any Duke cards. I grew up a Duke fan. 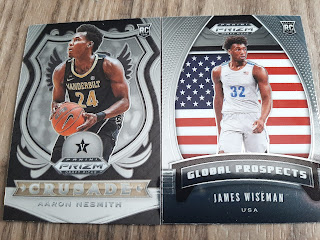 Subsets of Crusade and Global Prospects. 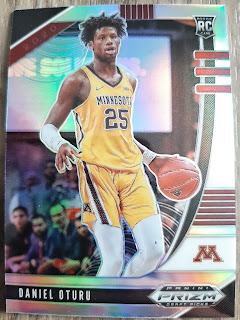 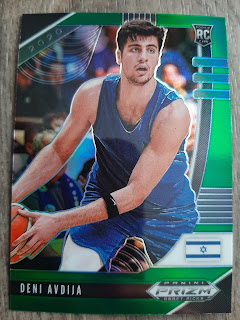 Green Prizm of Deni Avdija
And now for the Red, White Blue Prizm Draft pack.
*takes a sip, hopes for a good rip* 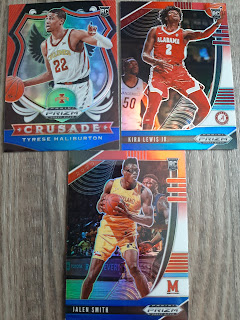 No Ball so not sure how I did.
That was a fun rip regardless of the outcome. Hopefully I can add a Ball to my rookie card collection at some point.
Thanks to @ChasinTheGraph for the trade. Hope we can do more of these down the road as I always have plenty of Panthers and am always in need of something to open.
*time to get another cup of coffee going and to find something for breakfast*
Posted by Matt at 9:10 AM