*sits down, takes a sip and get's ready for the newest post on Cards Over Coffee*
It has been a long time since I have added any autographs to my non-sports PC. WAY TOO LONG.
I have such a long list of autographs I want but haven't had the funds to grab them. That was until my birthday in March where I got a few small eBay gift cards.
Normally, I grab some cheap cards so I can land multiple mail days and stretch the mail day out as long as possible, but I decided this time to pull the trigger on a card I had my eye on for a few years that would eat up one gift card.
It was worth it.
*takes a sip*
I was never really into rap in the 90's, I was more of a pop kind of guy. But, one catchy song always came on the radio and I really liked it.
Gangsta's Paradise was released by Coolio in 1994-1995 and was featured on the soundtrack for the movie, 1995 hit movie Dangerous Minds.
I hadn't seen the movie until I met my wife, but the song I could listen to all of the time. Though I was far from a Gangsta's Paradise. Unless you consider out in the boonies just that. It was probably more like Rednecks's Paradise.
With anything that ties into nostalgia for me, I try to find a card that goes with it. 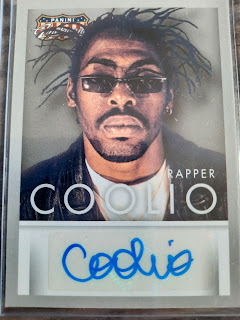 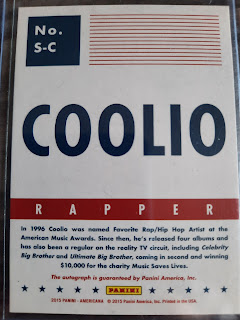 Back of the card talks more about his reality TV visits than his music. Kind of odd, but will go with it.
*takes a sip before finishing up today's post*
I have tried to listen to other songs by Coolio, but they never really caught on with me. Like I said, I don't listen to a lot of rap music especially today.
Let me know in comments your favorite Coolio song or songs in comments.
Have a Super Saturday.
*turns on Gangsta's paradise to lead out of today's post*
*Coffee Card Blogger Out*
Posted by Matt at 1:00 AM