*early morning posts are the best. That's when the most coffee can be consumed. It's time for some #CardsOverCoffee!*
Over the past year, I have been picking up cards from 2011 Topps American Pie.
It started with just collecting the base set, then I started to uncovering other parts of the set and the chase expanded from a few of the autographs, some of the relics and especially the American Pieces Relics.
*takes a sip before continuing on. I am a tad surprised as many times as I have edited the beginning of this post that I am not on Cup #2*
The American Pieces Relics is a four card set that features pieces of American history.
So far I have half of the set, but landed the one I sought out most first. 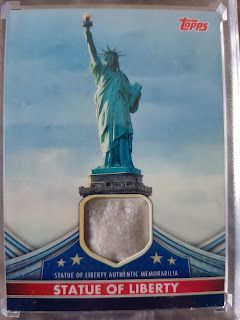 The Statue Of Liberty relic I have wanted since I saw it on Twitter. Being a NY sports fan and a Ghostbusters fan, this relic was much needed. 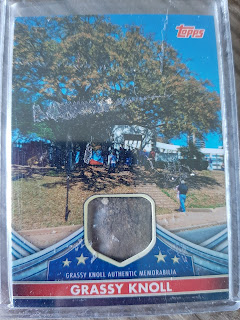 Grassy Knoll is from the JFK Assassination
*takes another sip, okay, honestly I am on Cup #2 now*

With two pieces down, only the Lewis & Clark Trail and the Gettysburg Cannon remain. I am hopeful I can complete this set at some point. If any of you have the final two pieces and they are for trade, contact me!

*takes a sip before finishing up today's post*
Funny thing about these relics is that they are apart of History, a subject I couldn't stand in school but have become more and more fascinated by the last few years. Maybe it's because I am more eager to learn as an adult or maybe the things we were once taught, have started becoming history themselves as the world evolves and adapts.
No matter the reason, I am enjoying the cards and the history lesson.
*Coffee Card Blogger Out*
Posted by Matt at 8:40 AM