As Long As We Got Each Other

*takes a seat, sits down and tries to squeeze in a post today. the internet was acting up again yesterday but because of the snow. Coffee ready, it's time for a new Cards Over Coffee*

If you grew up in the late 80's and early 90s, it would surprise me if you hadn't heard of or watched Growing Pains. The show ran from September of 1985 to April of 1992 and featured a pretty solid cast led by the late Allan Thicke and Kirk Cameron.
The show was about the Seaver family who lived in Long Island, NY. Psychiatrist Jason Seaver (Thicke) works from home both as a Dr and as a father who watched over his three kids while his wife Maggie, a reporter, worked. The three kids each had different personalities and brought different challenges to the table. There was ladies' man Mike (Cameron), the good student Carol and rambunctious younger brother Ben. The basis of the show was about raising the kids and the challenges or Growing Pains of doing so. They tackled a lot of issues on the show such as drugs, suicide, peer pressure, and alcohol to name a few. But, in the end, if they were together, they could face any of those problems that arose together.
I remember watching it religiously on ABC every time it came on and having that theme song stuck in my head until the following week. A lot of the problems the Seaver kids faced on the show weren't anything I could relate to at the age I watched it, but there were some I did face later on with friends. which made me think back to the show.
I can't imagine the topics the show would have to cover today if it was still going on.....
*takes a sip before moving onto the card portion of today's post*
*sings theme song in head while trying to type*
*tries to focus again..as long as we got each other....come on....okay...card time*
In the past year, I have added a few autographs from the show since I watched it and since that is how I grow my non sport PC. I added an Allan Thicke and Jeremy Miller last year and now have added a third one with today's addition of a dual autograph thanks to my buddy Valley Of Cards. 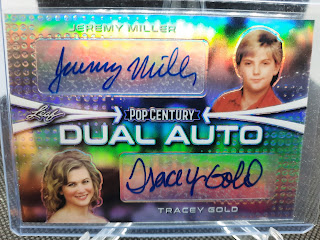 A dual autograph of of brother and sister Seaver, Ben and Carol. 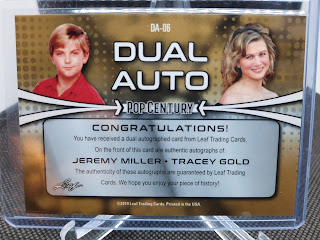 Back of the card. I really wished Leaf would add a blip about the actors on their trading cards.
Thanks again to Valley Of Cards for the assist on this card in our trade.
I would be curious if you guys watched the show in comments and your thoughts on it. I am glad they never remade it as remakes are awful. Though I will say I haven't watched any of the new Wonder Years to see if that is or not.
*takes a sip before finishing up today's post*
I think we could learn a lot from Growing Pains to use in today's culture and challenges that kids face or even us as adults face. What we need to realize despite everything going on in the world, is to take the one line from the theme song and apply that to our lives. Because As Long As We Got Each Other, we can tackle any problem in the world. We need each other's back in these trying times.
*Coffee Card Blogger Out*
*Show me that smile again...oh show me that smile....don't waste a minute on your cryin'.......*
*oh no, it's going to be a long day*
Posted by Matt at 7:58 AM