Something In The Water

*takes a sip, takes a bite of bagel and gets ready for a new cards over coffee post*
I realize a lot of my recent posts are based on music, but to me, music and cards go together just like cards and coffee. There are even days I will listen to music while I blog. Music is inspirational, music gets you motivated and music drives nostalgia. I am sure each of us can think of a song off the top of our head that attaches to a memory.
So, when I post about music, it usually has to do with a memory.
*takes a sip*
Before I show off today's cards, I have an update from my last music post that featured Sugar Ray lead singer Mark McGrath. I mentioned in that article how great of a person McGrath is and how he is always interacting with fans and how I hoped he would see my post.
Well......

As you can see, he did and even interacted more with the tweet. I will admit the 90's kid in me was very giddy.
Now onto today's singer.
*takes a sip, another bagel bite before moving onto the rest of today's post*
This one doesn't have a lot to do with 90's nostalgia and more to do with newer nostalgia....and maybe a slight crush. She is only 9 days older than me.
Carrie Underwood was Season 4's American Idol winner, a show my wife enjoys while I sort cards. Me personally, I only enjoyed the mishaps and terrible singers they used to show in the auditions. That's basically it for the nostalgic tie in here as well. My wife watched the show while I sorted cards. Kinda lame probably for some of you, but a memory is a memory and if there is a way to tie it in and hold onto it, you do it.
I have had my eyes on a rookie card of Carrie for a while now and thanks to Shane from Cheap Wax Wednesday fame, I was lucky to land it and a couple others. 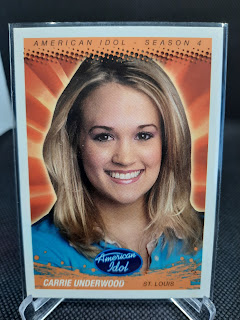 The 2005 Fleer American Idol card was Carrie's rookie card. The product also featured her in a couple of subsets as well. But, this one featured here is the "true rookie". 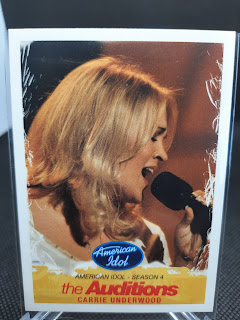 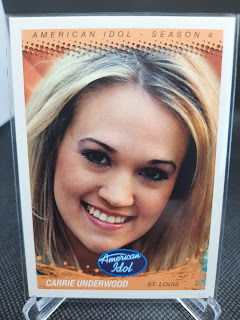 The set also featured autographs and she was one of the signers. The card is too far of a reach for me to ever acquire.
Thanks to Shane for the help in snagging these for me.
*takes a sip before finishing up today's post*
I doubt Carrie will see this post or even interact with it like Mark, but I will tag her regardless.
As I have stated many times before I don't like country music but will honestly admit I do enjoy a couple of Carrie's songs. This is the only time I will admit to liking any form of country music. There must be something in the water.
In comments today, let me know if you watch American Idol, who your favorite winner is and what you favorite Carrie Underwood song is.
Have a great Monday!
*Coffee Card Blogger Out*
Posted by Matt at 9:11 AM